MURMANSK – On September 17th, a group from the Murmansk Region’s Public Council on Nuclear Safety were allowed a trip to the Gremikha Naval nuclear waste storage facility to observe progress in how the facility is handling its new chores. Bellona Murmansk’s Andrei Zolotkov was along, and tells of what he saw.

Published on September 23, 2014 by Andrei Zolotkov 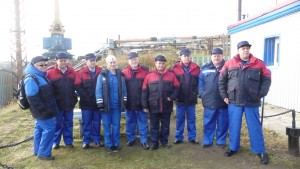 MURMANSK – On September 17th, a group from the Murmansk Region’s Public Council on Nuclear Safety were allowed a trip to the Gremikha Naval nuclear waste storage facility to observe progress in how the facility is handling its new chores. Bellona Murmansk’s Andrei Zolotkov was along, and tells of what he saw.

What was supposed to be the first day of sailing to Gremikha aboard the Klavdiya Yelanskaya was postponed because of rough weather. But on the second day, everything came together. The trip’s participants arrived on time, successfully navigated the bureaucracy of entering the closed fishing village of Ostrovnoye to board the Murmansk Shipping Company’s only passenger vessel making voyages along the coast of the Kola Peninsula.

We were a group of eight: a representative of Russia’s Federal Service for Environmental, Technological and Nuclear Oversight (Rostekhnadzor), the Federal Medical and Biological Agency, representatives of the Barents Region the WWF, Bellona Murmansk, press from the local television station Murman, and the Public Council’s secretary. Also accompanying us was Vasily Yermenko, chief engineer for Russia’s state nuclear waste handling organization SevRAO, with whom a detailed conversation greatly deflated our curiosity about what we would see at the journey’s endpoint.

As soon as we all settled in our cabins and adjusted to the slight roll of the sea, Yermenko began his introductions to the closed nuclear facility of Gremikha. His obligatory presentation was, thanks to the schedule change in our original departure time from Ostrovnoye, reduced to only five hours.

Through the evening and night, the vessel plied the knots to Gremikha and by morning we were already stepping out on the pier. A sense of nearly undetectable expectation awaited our arrival. The first thing we had to do was sign off on two instructional briefings that we had to prove with our signatures we had attended. Only after that did we change into special radiation gear and get outfitted with dosimeters.

There was not real surprise in this: we’d all been through it before at Andreyeva Bay or Sayda Bay. Only the icebreaker port Atomflot lets you walk around in your own clothes.

As I said, the delay in Ostrovnoye meant we had to move quickly, and we did a quick technical run through of what we were and weren’t allowed to do while there. About the only thing that was limited was photography – pictures were only allowed to be taken by the Murman cameraman, and only where he was permitted and only while photographing in the right direction. But this was not distressing – the SevRAO office at Gremikha had plenty of photos, specifically ones with descriptions of technical operations. The beginning of vigorous activities at Gremikha can be dated to 2003, when France hosted the first meeting of the Global Partnership where Russia presented its conception of the environmental rehabilitation of Gremikha.

Support was overwhelming: Russia (in the form of Russian state nuclear corporation Rosatom), France, Italy, the US, Sweden, and the European Bank of Reconstruction and Development (EBRD), Technical Assistance for the Commonwealth of Independent States (TACIS) all signed up as donors to the future project. Some €70 million was pledged over a 10-year period from the governments and sponsor agencies.

The Gremikha rehabilitation program foresaw activities to ensure the safety of the personnel performing work at the site; completion of the necessary systems and infrastructure equipment and carrying out unloading of spent nuclear fuel from reactors with liquid metal coolant aboard Alpha Class nuclear submarines and their subsequent dismantlement; and development and implementation of plans to remove from the facility spent fuel discharged from liquid metal cooled, as well as water cooled reactors, as well as the subsequent ridding from the site of solid and liquid radioactive waste. The plan also included reclamation and rehabilitation of buildings and facilities at the site.

Today, in 2014, 11 years after its conception, it’s safe to say that many of the rehabilitation projects for Gremikha’s facilities have been a success. The epic of removing spent nuclear fuel from pressurized water reactors between 2008 and 2012 is done. The effort to remove 898 spent nuclear fuel assemblies, 141 of them in damaged condition, was 100 percent successful.

It should be noted that the figures on spent nuclear fuel assemblies differ somewhat from those contained in presentations, but that doesn’t change the essence of the matter – which is that this particular type of spent fuel has been removed. The fuel assemblies were removed from an area on the territory of Atomflot where a great deal of them had accumulated. They were transported out using the special tanker Serebryanka, which was retrofitted for this purpose. If spent nuclear fuel from pressurized water reactors has already been removed, spent fuel from the liquid metal cooled reactors will remain at Gremikha for a few more years. At the moment, there are 10 units of spent removable parts, nine of which have not been unloaded. The technology for handling liquid metal cooled reactors differs from that used for pressurized water reactors, and removing the fuel is a multi-step process, which include, in abbreviated form:

An interesting feature of this is that this work is being carried out on 1800 inverted reactors. When completed, the reactor chamber is placed within the reactor compartment for further transport to the long-term storage facility at Sayda Bay and other spent removable parts are moved in special containers.

There is a decision in place that all work with spent removable parts (that is, spent nuclear fuel) will take place in a section of Gremikha, though there were earlier plans to perform these operations at Dmitrovgrad’s State Research Center for Nuclear Reactors. In order to transport spent removable parts, Italy fashioned 10 TUK-143 type containers, which will now be used here in Gremikha for temporary storage of radioactive waste without spent nuclear fuel.

In 2010 and 2011, spent nuclear fuel was removed for the first time at Gremikha and then in 2012 it was transported for special storage at Atomflot aboard the Serebryanka. The compartment with its integrated reactor were transported for storage to Sayda Bay.

When we discussed the technical operations with liquid metal cooled reactors, one factor under attention was that during work on the reactors, which were hermetically sealed with the help of furfurol and intended to be sunk, cavities that can be penetrated by water were discovered.

This demonstrates clearly the dangers that can come of the K-27 nuclear submarine, which was scuttled off the coast of the Novaya Zemlya peninsula in the arctic in 1982. Penetration of water into the vessel’s reactor containing highly enriched uranium-235 fuel could lead to a spontaneous chain reaction, as scientists from the Kurchatov Institute have warned.

While the high enrichment fuel U-235 penetration of sea water into the reactor may cause a spontaneous chain reaction – it is the scientists warn of the Research Center “Kurchatov Institute”.

Gremikha also houses plenty of liquid radioactive waste – some 380 cubic meters, which is planned to be carried away and reprocessed, but there is no apparent contractor for this process.

During our visit to Gremikha, we observed preparations for unloading spent nuclear fuel. The staff used simulators to test technologies for loading spend nuclear fuel assemblies into canisters. I have never seen personnel use so many dosimeters a piece – up to six per worker – in my 35-year experiences working in the civilian nuclear fleet.

Such precautions speak to the fact that Gremikha’s radiation safety regime is trying to foresee all possible scenarios that could arise during technological operations, including unforeseeable shots of ionizing radiation.

By 2020, it’s planned that all spent nuclear fuel will be unloaded from the remaining nine spent removable parts, and that within the same period, they will be sent to the Mayak Chemical Combine in the Urals

It is planned to 2020 to cope with the discharge of spent nuclear fuel from all the remaining nine VHF and in the same period, send them to the “Mayak” (Chelyabinsk region). This is just the rehabilitation portion of Gremikha. After that, there is a period of ambiguity which may become clearer after 2018, when financing would be secured for the engineering of these activities.

Of course, at the moment there is a probability that financing from foreign partners could be hard to come by, and the pace of work may slow down. But SevRAO’s Yermenko said he hasn’t seen that happening. Apositive factor.

And then our short technical jaunt through Gremikha quickly drew to a close. We didn’t even have time to discuss what we’d seen. By then we were quickly bouncing down the concrete slabbed road to the pier.

The staff of Gremikha should be thanked, as well as the weather, which during our visit was warm and still.