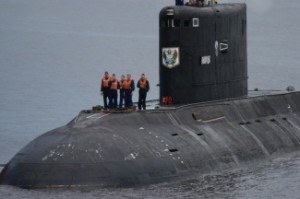 After nearly two decades that saw more than $20 billion in foreign funding help dismantle derelict nuclear submarines in Russia’s Northern Fleet – ridding the country of countless Cold War legacy radiological hazards – Moscow is spending more than 30 times that to reestablish itself as the preeminent nuclear submarine force in the world, Russian and other news outlets have reported.

There is no shortage of jingoism driving the massive build out of 10 new military submarines at a cost of $659 billion, according to Russia’s Ministry of Defense in a budgetary document (in Russian) detailing its spending in 2014 and 2015, compiled in 2012

Russia has justified the push to broaden its attack and ballistic submarine capabilities to tighten its grip of the Arctic and its vast oil and gas prospecting activities. The staggering defense outlays are unlikely to raise domestic questions amid a steady drumbeat of anti-western propaganda that has become all-pervasive media fare since the Ukraine crisis began in March. The Severodvinsk submarine. (Photo: Sevmash.ru and courtesy of the Barents Observer)

On July 19, the Russian navy laid down the keels for three new vessels at the White Sea’s Sevmash shipyard in Severodvinsk – one for the strategic missile sub Knyaz Oleg, of the much-touted fourth generation Borei submarine class, as well as those for the Khabarovsk and the Krasnoyarsk, both slated as fourth generation Yasen Class subs, the Barents Observer news portal reported.

The 10 are scheduled to be seaworthy by 2020, though expensive and protracted delays with the Severodvinsk, which was finally commissioned to the Russian Navy in June after 23 years of construction, likely mean the finish dates are fluid.

The 10 subs presently being built will join another 24 nuclear subs that are still in service in Russia’s Northern Fleet. It remains unclear if all the subs under construction at Sevmash will go to the Northern Fleet, or if some will be distributed to the Pacific Fleet, based near Vladivostok, the Barents Observer reported.

The remaining submarines under construction are two Yasen Class subs called the Kazan and the Novosibirsk, and two Borei Class subs, the Vladimir Monomakh, and the Knyz Vladimir, the portal reported. Both classes already have one sub at sea: the Yury Dolgoruky of the Borei Class and the Yasen’s Severodvinsk.

The Barents Observer said that Sevmash, possibly in conjunction with St. Petersburg’s Admiralty Shipyard, is also building two more special purpose submarines. It reported one of these submarines could be a sister vessel to the Losharik, also under construction, and which is a special deep diving titanium hulled vessel for work on the sea floor.

The hundreds of billions going into the new sub classes, he said, is a slap in the face to these and other western funded nuclear clean up efforts in Russia, as it shows clearly that Moscow has the cash to mop up its own mess.

“There are still huge amounts of radioactive waste and spent nuclear fuel at [the former sub fuel storage site at] Andreyeva Bay that need to be addressed correctly,” Bøhmer said.

“As tension grows between Russia and the rest of the world as the crisis in Ukraine deepens, it’s unlikely that the huge international resources available in the past will again materialize to continue these clean up efforts,” he said, adding that, “the building of new submarines in Russia shows it has the financial resources to put toward Cold War legacy clean up as well.”

The all but defunct US-based Nunn-Lugar, or Cooperative Threat Reduction program, helped decommission dozens of Yankee and Delta Class Russian ballistic missile submarines since 1992, and safely store their waste. The Barents Observer noted that European countries from the UK to Norway, as well as Canada and South Korea paid to dismantle attack and multi-purpose submarines – most in miserable, rusted-out condition under constant threat of sinking – which were not covered by the Nunn Lugar agreement.

Norway devoted millions to dismantling four submarines at the Zvezdochka shipyard in Severodvinsk and the Nerpa shipyard near Murmansk, the Barents Observer said. Norway also took part in the delicate transport of a dilapidated November class submarine to dismantlement, a $3 million project.

The former G-8 – now the G-7 after Russia’s ouster over its annexation of the Crimean Peninsula in Ukraine – likewise poured $20 billion into remediating nuclear hot spots in Russia between 2003 and 2013, with the aim of preventing nuclear materials from falling into the hands of terrorists or rogue states.

This funding never included dismantling and safe storage for spent nuclear fuel among Russia’s decommissioned nuclear powered battle cruisers, like the Admiral Ushakov. This vessel has been bobbing at quayside, its two pressurized water reactors loaded with spent fuel, at the Zvezdochka shipyard for 17 years.

The yard’s director, Vladimir Nikitin, recently made an appeal to the Russian government for help to safely dismantle the vessel, the costs of which he estimates will exceed dismantling a nuclear submarine by 10 times. The b-port news portal based in Murmansk reported (in Russian) that no funding to do anything with the vessel is expected from federal coffers until 2016 – yet another in a series of long delays.

Yet for the towering funds infused by the West for nuclear remediation, Russia is outspending the G-8 efforts by some 30 to one. The Yasen Class debut submarines, the Severodvinsk, cost $1.5 billion. This equals the cost of two Borei class nuclear subs – the first of which was launched in 2008 – or the cost of 50 SU-35 fighter planes.

The Kazan, the second of the Yasen Class line, is expected to be twice as expensive as its older brother, according to the official Izvestia newspaper.

If there is any silver lining to the new build out, it is that the new submarine reactors are not expected to significantly add to waste already accrued at places like Andreyeva Bay, said Alexander Nikitin, chairman of the Environmental Rights Center (ERC) Bellona, and a former submarine captain.

He said the new vessels have new reactor installations that might not require refueling for at as many as 15 years after their launch, thus cutting down on the amount of spent fuel from them that would have to be stored. He added, however, that little is known of the new reactors and authoritatively discussing their future contribution to accrued spend nuclear fuel was difficult.