The long struggle to dismantle the Soviet era nuclear missile cruiser Admiral Ushakov – which has been out of active duty for the past 17 years following a machinery accident – has been put off for another year over cost concerns, raising environmental and radiological concerns, the b-port news portal in Murmansk reported. 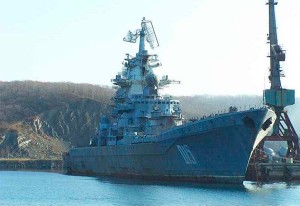 The long struggle to dismantle the Soviet era nuclear missile cruiser Admiral Ushakov – which has been out of active duty for the past 17 years following a machinery accident – has been put off for another year over cost concerns, raising environmental and radiological concerns, the b-port news portal in Murmansk reported.

A spokesman for Zvezdochka ship repair yard where the vessel is moored, yesterday told b-port that dismantlement works on the enormous vessel would not begin until 2016 at the earliest.

Russia’s state nuclear corporation Rosatom has included in its 2015 budget costs for drawing up engineering schematics for its dismantlement, but by all accounts, the project is running late and short on cash.

The financial crunch to dismantle the Admiral Ushakov comes as a bad time. The majority of international aid flowing to nuclear submarine dismantlement and radiological waste security via the G-8 Global Partnership plan has already been committed, laying the burden for securing the vessel on the Russian government.

Unilateral funding from the United States’ Cooperative Threat Reduction (CTR) program has also reached its conclusion, and tensions between the West and Russia over the simmering crisis in Ukraine make it difficult for Moscow to find donors.

For its part, the Russian Navy is instead pouring a mint into developing new submarine technologies at the expense of cleaning up legacy waste, said Nils Bøhmer, Bellona’s general manager and nuclear physicist

‘The Russian navy is currently spending millions on new submarines which is diverting funding from cleaning up radiological challenges left over from the past,” said Bøhmer.  “To have this vessel lying around for 17 years with spent fuel is a dangerous and uncertain situation.”

The Admiral Ushakov, formerly based at Severomorsk near Murmansk, has been moored at the Zvezdochka ship repair yard near Severodinsk, northern Russia, since 1997, fully loaded with its spent nuclear fuel.

It originally came to the shipyard for repairs, but money ran short to implement them. Failing the repairs, the ship’s reactors were shut down and it was decommissioned from the Russian Navy.

The major nuclear cruiser has been bobbing at dockside awaiting final dismantlement since then.

The scientific community in Russia has been unified, repeatedly underscoring to Russian media that the unloaded spent nuclear fuel aboard the ship poses a major environmental danger to the Arkangelsk Region, where Zvezdochka is located.

The shipyard’s general director, Vladimir Nikitin, last year told b-port that the ship “poses a definite threat to Severodvinsk and its residents,” and that time for containing the danger was running short.

According to Nikitin, the nuclear fuel in the Admiral Ushakov’s two pressurized water reactors has never been changed, meaning it has remained in the reactors for 34 years.

“The time for dry-docking the cruiser and repairing its hull has long past,” Nikitin said last year. “Keeping it afloat along the embankment is not expensive but unsafe.

In a separate interview with the official ITAR-TASS news agency, he said that there were no plans for repairing or modernizing the vessel.

“It is therefore necessary to unload the spent fuel, put the vessel into a safe condition, take it out of the water and free up needed dock space,” he told the agency.

The Admiral Ushakov at 251 meters in length carried a crew of 700 sailors and has a water displacement of 28,000 tones. Originally known as the Kirov, the ship’s keel was laid at the Baltiysky Shipyard in St. Petersburg in 1974, and was commissioned to the Soviet Northern nuclear fleet in 1980.