MURMANSK – A year has passed since the hazardous Lepse floating spent nuclear fuel and radioactive waste service ship was towed from the center of Murmansk to the Nerpa shipbuilding yard for dismantlement, bring a sigh of relief to the 300,000 strong northern city. But the ship is still bobbing in port at the shipyard and no deconstruction efforts are even close to beginning – how long will the foot-dragging last?

Published on September 17, 2013 by Anna Kireeva, translated by Charles Digges

On September 14 of last year, Russian state nuclear corporation Rosatom, the European Bank of Reconstruction and Development (EBRD) and Bellona – which was present while the Lepse was towed out of the Atomflot nuclear icebreaker port in Murmansk – rejoiced over their success in a decades-long battle to remove the single largest radiation peril in Murmansk harbor to a port where it would finally undergo safe dismantlement.

It seems that all of the protracted negotiations, conferences, agreements and the bureaucratic and financial hurdles had been cleared, and the project had reached smooth sailing.

Bellona since 1994 exerted all the influence it could to implement the Lepse dismantlement project. It didn’t always go smoothly, but in September last year, the floating waste ship was finally moved out of its mooring at Atomflot.

The Lepse’s dismantlement has been on the nuclear remediation agenda since the 1980s, but at that time, the necessary technology to safely remove the damaged nuclear fuel cells stored within the holds of the 79-year-old ship.

The search for technical means, equipment, financing and pushing through all the national and international agreements surrounding the vessel’s dismantlement went on for 20 years.

In 2010, the Anatoly Zakharchev, head of the Integrated Submarine Dismantlement office of Rosatom’s Nuclear and Radiation Safety directorate, confidently introduced the preliminary schedule for dismantling the boat, which started with unloading the spend nuclear fuel onboard by the third quarter of 2012 or the first quarter of 2013.

As follows from the stated schedule, 2013 would have marked cutting up the hull of the ship and preparation of the bow section for removal of spent nuclear fuel. Work would also have commenced on unloading the rest of the spent nuclear fuel and radioactive waste and on the scrapping of metal and disposing of the industrial waste.

Yet only one task on the work schedule has thus far been completed – readying the ship for transport and dismantlement and moving it to the Nerpa Ship Repair yard.

Since the Lepse was transferred a year ago, practically nothing has happened. It has not been transferred to the dry dock facility necessary for its dismantlement, which is one of the chief markers toward reducing the radiological threats posed by the ship.

“Putting the Lepse into dry dock would reduce nuclear and radiological dangers of the ship by 90 percent,” said Atomflot General Director Vyacheslav Ruksha said at the time.

The Nerpa over the last year has begun construction of the infrastructure necessary for the Lepse’s dismantlement. This work, according to the initial schedule, should have taken place in 2011.

According to Oleg Yerin, head of Nerpa’s division of external economic affairs, the shipyard is adapting infrastructure in accord with the conditions of the agreements.

As stipulated by its contract, Nerpa is preparing a protective shelter for the Lepse for when it is finally moved ashore. Nerpa is additionally modernizing a dry dock bed for the vessel.

“The process of fulfilling the contract is now at 82 percent,” said Yerin in a telephone interview with Bellona.

Traffic jams on the way to dry-dock

Be that as it may, the dry dock for which the Lepse is bound is currently occupied by the first Soviet-era nuclear submarine, the Leninsky Komsomol, which has created a bottleneck for carrying out the internationally conceived dismantlement project.

“Of course, the Leninsky Komsomol is physically interfering with work, but there are other issues,” Yerin told Bellona.  “For instance, there is as yet no contract for putting the Lepse into the dry dock.”

Representatives of Rosatom and the EBRD have all said they see no special problems in the pile up of delays.  For his part, the EBRD’s Sergei Bocharyov told Bellona in a telephone interview that finances earmarked by donors to the Northern Dimension Environmental Partnership (NDEP) would be put toward their purpose regardless of broken deadlines. The NDEP focuses its funding efforts on environmental cleanup in Russia.

“In all likelihood, in May or June next year, the situation with the Leninsky Komsomol will be decided,” Kashka told Bellona in an interview. “But despite the fact that barely any work has taken place on the [Lepse] over the last year, I hope that by December, the cutting up of the upper works of the ship will begin.”

The fundamental problem surrounding the historic Leninsky Komsomol is that the notion of turning it into a museum piece has not gained any financial traction. Officially, it belongs to the Ministry of Defense, whose decision and financial responsibility it is to give the sub some historical fanfare or just let it be crushed into safety pins.

According to Alexander Nikitin, chairman of the Environmental Rights Center (ERC) Bellona and a former naval captain, the Leninsky Komsomol was initially put into dry dock at Nerpa and sawed into three sections before the Ministry of Defense took into account that the vessel was the first Soviet nuclear submarine, and perhaps deserved a more honorable discharge from its duties. 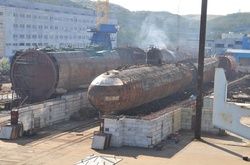 Because it is laying in pieces, it would have to be welded back together at significant cost so that it could actually float again.

Rosatom’s unsuccessful appeals to the Defense Ministry to make up its mind have now fallen on the desk of Murmansk Regional Governor Marina Kovtun.

It is hoped that by-passing the Defense Ministry, some clarity on the Leninsky Komsomol’s can be reached. Kovtun herself confer the Lepse its legal place in the dry dock occupied by the sub.

Andrei Zolotkov, director of Bellona-Murmansk, says the situation brewing around the Lepse and the Leninsky Komsomol is an example of nearsightedness in the planning for the decommissioning of the sub.

“At that moment, they forgot that the sub was there first. But now they need to do a reshuffle at the Nerpa dry dock: take away the Leninsky Komsomol, putting together three of its parts in a unified whole and put the Lepse in its place,” he said. “The Lepse project is international with solid financing exceeding that of work on the Leninsky Komsomol by some 40 times, and meanwhile there is absolutely no money to make a museum out of the sub.”

“In order to reconnect the three piece of the Leninsky Komsomol that were sawed apart would cost about 50 million roubles ($1.5 million), but a museum would cost about 10 times more, and history can really draw out time,” said Zolotkov.

He noted that the situation with the Leninsky Komsomol could be repeated in a few years when it comes time to decide whether to dismantle the Arktika nuclear icebreaker, or reequip it as a museum.

“There are preliminary financial calculations on the cost of dismantling the icebreaker, but there are already 15,000 signatures on the Internet in support of preserving the ship (on the Russian website We request our Arktika be Preserved)

The website cites the need for significant state resources to retrofit the icebreaker into a museum  – resources on the order of some 500 million roubles ($15 million).

“It’s would be desired that aside from emotion, the big bosses began this preliminary work now, not at the very moment the time comes to tow the Arktika to dismantlement,” said Zolotkov.