While the new budget submitted for 2013 by President Barack Obama could mean positive initiatives to reduce US dependence on fossil fuels, deep cuts it proposes in Cold War legacy clean up in Russian and other countries have cause a ripple of worry to run through other corners of the environmental and nonproliferation community.

Published on February 20, 2012 by Charles Digges 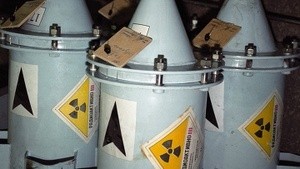 The new budget significantly scales back programs to lock down or eliminate stockpiles of weapons of mass destruction – including nuclear weapons in Russia and other countries, according to a budget analysis by the US-based Partnership for Global Security.

The one US-based non-proliferation program that will not see its funding cut, but rather boosted, is the Pentagon-run Cooperative Threat Reduction – or Nunn-Lugar- program, which will see its it’s budget boosted by $10 million.

Nunn-Lugar has been responsible since the fall of the Soviet Union for securing hundreds of stocks of nuclear missiles and materials that were formerly aimed at the United States and for destroying delivery, such as ballistic missile submarines. It has also worked to secure Russia’s stocks of chemical weapons.

It has managed to do this since 1994 on a budget averaging about $450 million to $500 million a year, making it one of the most cost effective nuclear defense programs run by the US Department of Defence.

Nevertheless, the program’s Global Nuclear Security initiative would receive a $21.3 million reduction to $99.8 million under the 2013, said the Partnership for Global Security analysis.  But its efforts to improve biological security in Africa and to maintain biodefense activities in Asia and Eastern Europe would be upped by $16.9 million to $276.4 million in the new budget.

Those non-proliferation programs that will take an across the board hit are those run by the Energy Department’s semi-autonomous National Nuclear Security Administration, who would see its budget shrink by 23.3 percent under current year allocation under the present White House budget proposal, said the report.

CTR up, everyone else down

Among those that will be should the Obama budget be approved by congress are the NNSA’s International Material Protection and Cooperation (IMPC) program, whose focus is on nuclear security and anti-trafficking efforts in vulnerable countries would see its funding levels decreased by $206 million to $311 million for the fiscal year that begins on October 1.

The initiative’s Second Line of Defense program, which provides radiation detectors to foreign nations, would see a 65-percent funding drop.

The NNSA’s Global Threat Reduction Initiative, whose aim is to protect and repatriate stocks of nuclear and radioactive materials from formerly Soviet built research reactors back to Russia would also see it’s funding cut. The program is currently budgeted to receive $466 million for 2013 representing a 20 percent funding drop for the Nuclear and Radiological Material Removal program.

The program has in recent years come under fire from both Russian environmentalists and former Eastern Bloc countries, that say moving Soviet supplied highly enriched uranium from research reactors where it is stored to less secure storage in Russia is unwise.

Protested program gets a reduction

Germany was the first country to refuse to ship highly enriched uranium from the Rossendorf research reactor in the former East Germany on the grounds that storing and reprocessing it at Russia’s Mayak Chemical combine in the Southern Urals was inherently unsafe.

The shipment of the uranium was stopped by German Environmental Minister Norbert Röttgen, said the main reason the planned shipment would not move forward was because Mayak could not safely handle the spent nuclear fuel elements that come from the Rossendorf reactor.

“We welcome the decision of Minister Röttgen to not send radioactive waste to Russia – after many mistaken decisions, at least one is right,” said Ecodefence co-chair  Vladimir Slivyak on at the time. “Röttgen finally said what has needed to be said for along time – that Mayak is an extremely dangerous and unreliable enterprise with which it is not worth associating.”

Indeed, the following year, Ecodefense uncovered evidence in court documents that Mayak had never ceased dumping radioactive reprocessing byproducts into the nearby river Techa, a source of household water supply for thousands of area homes as it had years earlier promised it would.

Russian origin highly enriched uranium has been, or is being, repatriated to Russia from 17 countries from Poland to Vietnam.

Separately, the State Department’s program to improve export controls in partner states would be cut by close to 10 percent, receiving only $55 million. Additionally, a program intended to prevent acts of terrorism involving weapons of mass destruction would also receive a 16 percent budget cut to $5 million.

The new 2013 budget presented by Obama is not to the liking of many observers in the Washington nonproliferation sector, who say that the danger of nuclear material being smuggled out of the former Soviet Union persists, even after 20 years of efforts to curb them.

“If we think back to the early 1990s, that was a pretty damn scary time in which we realized the world’s largest, WMD-armed empire was collapsing in upon itself … The threat of terrorist acquisition was at its greatest then,” Brian Finlay, a senior associate at the Henry L. Stimson Center in Washington told the Global Security Newswire. Today, he said, “we don’t have one giant problem, but we have many, many little problems,” he said.

In September 2011, an international investigative group said it suspected a criminal syndicate has been trying to sell Russian origin highly enriched uranium to buyers in North Africa following a sting operation over the summer in Moldova.

A report released days after that announcement by Senator Richard Lugar, co-creator of the Nunn-Lugar programe and senior member of the Senate Foreign Relations Committee, raised concerns about the North African link as terrorist groups such as al-Qaida in the Islamic Maghreb are suspected to be operating in the region.

“Should the existence of a legitimate buyer (or middleman) from a region with a history of terror cells be confirmed, then the case would be substantially more alarming than other recent fissile material interdictions, where official agents were the sole potential buyer,” said the report.

And in the summer of 2010, Moldova was again the site of a uranium-238 find. Those arrested in that case included former Moldovan police officers. All of the suspects had previous criminal records for possession of nuclear materials.

The smugglers had reportedly been trying to sell the material on the European black market for 9m euros ($11m). It was not clear from where the substance was obtained or where it was headed.

Uranium-238 is not a fissile substance, which means that it cannot by itself unleash a chain reaction. But it can be converted to create plutonium – a source for nuclear power and nuclear warheads.

Bellona Genral Manager and nuclear expert Nils Bøhmer said at the time that neither the amount nor the substance itself seized in Moldova were especially dangerous, and could be handled in one’s hands.

But Bøhmer did join other experts in their fears over traffickers obtaining nuclear materials from the former Soviet Union with the aim of selling them to rogue groups in the hope of making so-called dirty bomb.

“This still shows there is a black market especially in countries that formerly fell under Soviet influence,” said Bøhmer.

And in 2009, three Ukrainians were arrested for seeking to sell a metal container of what they said contained some 3.7 kilograms of plutonium-239 for a price of $10 million in a sting operation set up by the Ukrainian Security Service.

The metal cylinders the three were trying to peddle, however, were revealed by a preliminary security service analysis to contain the radioactive substance americium produced in the Soviet Union. The Ukrainian Security Service that the substance had been produced on Russian territory in the Soviet era and then transferred to Ukraine from a neighboring state.

“We’re a lot better off now than we were 20 years ago, I don’t think there’s any question about that. The security at the facilities is a lot better than it used to be,” said Ken Luongo, president of the Partnership for Global Security. “The problem is there’s a huge number of these facilities and in Russia in particular, there’s a huge amount of material, the largest amount of fissile material in the world.”

“The protection that we put in place there is very good physical protection … but the much more difficult aspect of this is on the accounting and control of how much material is actually out there,” he told GSN.