Published on November 2, 2011 by Charles Digges 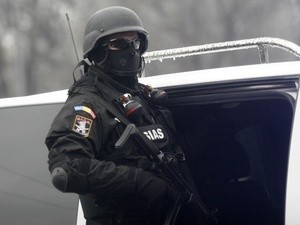 “The commission for the control of nuclear activities (CNCAN) was informed on October 26 that eight 3.5 metre  long cylinders containing 73.5 kilos of uranium ore disappeared from the depot at Stei,” CNCAN said in a press release. The containers were stored in an industrial part of the city.

But according to the Russian news site, newsru.com, the news of the theft was concealed until today.

A local daily, Bihoreanul, said that the theft was discovered when several employees entered the depot in order to prepare the transfer of the uranium to a processing plant in Feldioara.

Should the containers of uranium have been broken, it could have led to contaminaton, but experts consider that possibility to be remote, Russia’s Interfax news agency reported.

“The ore extracted from the Baita quarry has low radioactivity levels” and poses virtually no contamination risk for the environment, the CNCAN released added.

“Even if the metal cylinders were broken or destroyed, the impact would be very limited” given the nature of the ore, the commission stressed.

Local police said an investigation had been opened and several suspects would be interrogated soon.

The plant still runs on uranium accrued during that time frame, newsru.com reported.

A total of 12 cylinders should have been stored in the depot supposedly benefitting from strict security measures.

“The uranium could have been stolen three months or even a year ago but the theft was only reported last week when it could not be concealed anymore,” a former engineer of the national uranium company told the Bihoreanul  newspaper on condition of anonymity.

Uranium processing began in Romania in !952, after WWII and the first concentrated shipments of uranium ore were exported to the Soviet Union. After that, all uranium extracted in Romania was reapportioned for use in Romania’s single nuclear power plant, Cernavoda, under the rule of dictator Nicolae Ceausescu, the ITAR-TASS Russian news agency reported.

The newsru.com report quoted the CNCAN report as saying that after reactors No 3 and 4 go online before 2015 romania will only be able to supply it with uranium enriched to 12 percent  – as oppose to the usual 20 percent that comprised most commercial uranium – as the past stocks at Romania’s mining areas have run out.

The Cernavoda plant is based on the Canadian Candu 6 technology, which uses raw uranium and heavy water.

In September authorities in Chisnau, the capital of Romania’s neighbor, Moldova – a former Soviet republic – said they suspected a criminal syndicate has been trying to sell Russian origin highly enriched uranium to buyers in North Africa following a sting operation over in July, which netted six arrests in a sting operation.

Authorities there said they believe at least a kilogram of highly enriched uranium remains in criminal hands.

Moldovan authorities believe the uranium was taken through the break-away republic of Transnistria, which is known to be a haven for smugglers.

Though the quantity at large is a fraction of what would be needed to make a bomb, international investigators point to it as new evidence that a black market in nuclear materials from poorly secured sites in the former Soviet Union is still alive.