Published on December 15, 2010 by Andrey Ozharovsky, translated by Charles Digges 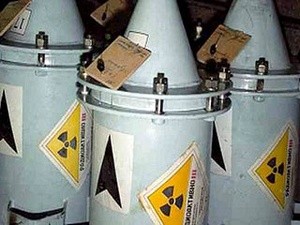 Novikov said in a telephone interview that irradiated fuel elements of highly enriched uranium weighing 21 kilograms  were delivered to Mayak in the Chelyabinsk region. Novikov added that, “no further shipments are expected from Belarus this year.”

The fuel was used in Belarus’s IRT-M research reactor, which has a thermal rating of 4 megawatts. The reactor was stopped in January of 1988 and completely taken out of service in 1998.

In April, Belarusian President Alexander Lukashenko announced that Belarus possessed hundreds of kilograms of uranium. “We have highly enriched uranium – hundreds of kilograms that are factually weapons grade and less enriched.” However, ***he refused to send it out of the country, calling it the “property of the people.”
http://www.bellona.org/articles/articles_2010/Lukashenko_HEU

However, the position of the Belarusian government later changed and it began to send uranium ot Russia. Moreover, Belarus while attending the Organization for Security and Cooperation in Europe (OSCE) summit in Astana, Kazakhstan on December 1 obligated itself to liquidate its remaining stocks of highly enriched uranium. The agreement was signed between the United States and Belarus. ***Bellona web reported on this development earlier this week, but at the time, the exact dates for the transport of uranium and its volume were not known.
http://www.bellona.org/articles/articles_2010/Belarus_HEU

Quiet transport
The recent transport of the waste to Russia from research reactors in Germany and Serbia became a flashpoint of public attention. The Belarusian transport went unnoticed.

But the essence of the Belarusian shipment was the same – the waste was delivered to Mayak, were as a result of so-called reprocessing, the volume of waste will grow by 100 times, and liquid radioactive waste could be dumped into natural water bodies.

***Germany recently refused to send further waste to Russia because of the catastrophic situation at Mayak.
http://www.bellona.org/articles/articles_2010/german_Mayak

What is Belarus thinking?
It would seem that ridding the country of problems caused by spent nuclear fuel would get public support. However, not all of Belarus considers that it has a moral right to send its waste to Russia. Here are what some participants of a discussion of the issue in Belarus had to say.

“If we consider that they waste will be taken somewhere in Chelyabinsk, and if we consider how people there are suffering from the fuel reprocessing enterprise,  then we are of course against it.”

“Relative to exporting waste to Russia – the situation there is really bad. One could suggest the initiative that it be exported to the United States, maybe Obama would be interest in this conclusion.”

“I think it would be consistent to come out against Belarus conducting nuclear experiments. That is not only not exporting irradiated fuel from out own installations to Russia, but not exporting it at all.”

“I am against any operations with nuclear fuel.”

The November transport has yet another aspect. The Belarusian authorities will not give up their intentions to build a nuclear power plant. As for waste from the future nuclear power plant, there position is that there will be no problem because Russia will deliver fresh fuel and take back spent fuel.

But Russia will have to return the waste from reprocessing spent nuclear fuel to Russia. This means that in the case the nuclear power plant is launched, nuclear transports will become rather frequent, and the export of 41 kilograms of spent nuclear fuel could be a rehersal for exports dozens of hundreds of tons of nuclear waste from the Belorusian Nuclear Power Plant.