Representatives from Russian and Norwegian state auditing authorities have completed a joint inspection of expenses made using funds that Russia’s northern neighbour earmarked to clean up the consequences of radioactive contamination at various sites of Murmansk Region.

Published on November 29, 2010 by Alexey Pavlov, translated by Maria Kaminskaya 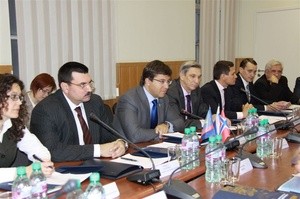 Located on Russia’s Kola Peninsula, in the far north of European Russia, Murmansk Region is one of Norway’s closest neighbours, and its nuclear and radiation safety has always been of particular concern to the Norwegians. As the very first steps were being made to try to clean up the nuclear legacy of the Cold War across the vast Russian territory, the costs of such an endeavour in this region alone were estimated at some $4 billion – and it was Norway, in the early 1990s, that first suggested aiding Russia in nuclear safety projects in the north.

According to official data, between 2001 and 2009, Norway allocated about NOK 100 million ($16.2 million) annually to help Russia upgrade storage conditions for spent nuclear fuel, decommission retired nuclear submarines, and clean up the consequences of radioactive contamination at the now-defunct naval bases formerly run by the Russian Northern Fleet. The money was being placed in the care of Murmansk regional authorities and a range of organisations operating within the Russian top nuclear authority Rosatom – which has over the years been restructured from the former Ministry of Atomic Energy into the Federal Agency for Atomic Energy and then into the State Nuclear Corporation Rosatom.

The recent audit was meant to look into just how that money has been spent.

“The Russian Accounts Chamber and the Office of the Auditor General of Norway have been carrying out a number of supervisory measures,” said Sergei Antonov, a representative of the Accounts Chamber of the Russian Federation. “Apart from assessing the efficiency of producing results in particular radiation safety projects, there is yet another project due to be completed this year. This will be inspecting the efficiency of using marine bioresources of the Barents and Norwegian seas. A general report on that project will be ready by next spring.”

Auditors from both sides have promised to soon summarise their findings and present them to the public. One of the results, however, is already clear: The two countries have made it possible to create an efficient system of cooperation in joint inspections.

“The auditors first gather all the material, analyse it, and then present their conclusions,” said Trond Solås, a representative of the Office of the Auditor General of Norway. “We are now getting together all the data compiled by the Russian side and working with Norwegian organisations. We are confident that we will be getting good results.” 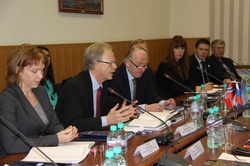 Zolotkov was referring to a programme started in 2002 among the Group of Eight industrialised nations during their meeting in Kananaskis, Canada, in which they promised to give Russia $20 billion over ten years for nuclear clean-up projects. It is also called the “10+10 over 10” programme because America pledged $10 billion over 10 years, leaving the other participating countries (Japan, Canada, Great Britain, France, Germany and Italy) to come up with $10 billion among themselves.

Much of this funding has not materialized as expected as all of these countries have slated their contributions to go into their usual aid packages. But regardless of the particulars, continued funding is crucial to keeping the urgent remediation projects in Andreyeva Bay afloat.

Great Britain has already refused to finance the construction of the main building planned for spent nuclear fuel removal works in Andreyeva Bay. Bellona believes, therefore, that under no circumstances should Norway abandon the project.

Zolotkov said he was very doubtful that Rosatom would see the remediation projects in Andreyeva Bay to the end without the help from Russia’s partners abroad. The projects would require hundreds of millions of euros that Rosatom will have trouble finding – if only because the Russian nuclear authority has been much keener on promoting its new pet project, floating nuclear power plants, and has been just as eagerly pushing for the construction of new stationary nuclear power plants as well. Nuclear construction is already costing huge sums of money to the state budget. For Rosatom, therefore, funds provided by Russia’s Western sponsors, spell a great chance to move ahead with cleaning up the legacy of the arms race without spending a dime.

“It is actually very interesting to find out how exactly the money has been spent. Because I have had a chance to participate in operations involving the removal of spent nuclear fuel from nuclear submarines,” Zolotkov said. “I know that a fuel unloading operation costs on the order of hundreds of thousands of euros. And I know what sort of bonuses the team would receive – a few percent of this amount. So I was always interested to know – where does the rest of the money go?”

For both Bellona and the general public, it would be interesting to find out whether the works are done according to European or Russian prices. If it’s the latter, then an assumption can be safely made that contracts may be artificially overpriced. It is exactly there – in projects where budget or sponsor funds are involved – that potential scandals abound, since the temptation is just too big to take a pass on. And Rosatom has already given more than reason to doubt the efficiency of the ways in which it spends money allocated to this or that project.

The results of the joint inspection by Russian and Norwegian auditors will be discussed at a meeting of the Collegium of the Accounts Chamber of the Russian Federation in late December. After that, the findings will be made available for the media. That is likely to happen in early 2011.