Polish, German spent nuclear fuel passes through Murmansk on its way to reprocessing at Mayak

MUMANSK – In conditions of near complete secrecy, a load of spent nuclear fuel was delivered on the dry cargo freighter MCL Trader to the port of Murmansk in another delivery from Germany. The containers of the radioactive spent nuclear fuel were offloaded for rail transport at the nuclear icebreaker port of Atomflot for further delivery to the Mayak Chemical Combine in the Chelyabinsk region for reprocessing.

Published on October 13, 2010 by Anna Kireeva, translated by Charles Digges 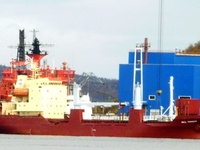 In the same manner, another load of 450 kilograms of Russian origin spent highly enriched uranium arrived from the Ewa and Maria research reactors in Poland as part of the US Global Threat Reduction Initiative.

At the beginning of 2009, Russian and Poland signed an agreement to repatriate all highly enriched uranium from Poland’s research reactors over a period of 20 years, with the possibility for an extension.

The spent nuclear fuel from Poland, which could make 18 nuclear weapon units, as reported by London’s Daily Telegraph, was sent back to Russia in a series of five parcels over the period of a year.

Murmansk as a nuclear transhipment point

At first, the nuclear loads from Poland began during autumn of last year.

“That Murmansk is more and more frequently becoming a point for the offloading of spent nuclear fuel from ships to trains is an established fact – and these loads will only increase in years to come,” said Andrei Zolotokov, Executive Director of Bellona Murmansk.

Likewise, authorities in the Saxony area of Germany have decided to send their spent nuclear fuel via the Baltic Sea for train transportation to reprocessing at Mayak. It is unlikely that the route – first via the Baltic and later through Murmansk for transport to Mayak – will change. German shipments will likely begin in 2011 or earlier.

The load from Germany will consist of 951 fuel rods from nuclear reactor at the Rossenford Research Centre, which was built in East Germany with the support of the Soviet Union, and which has not been functioning since 1991.

The decision by Saxony officials to send radioactive waste to Russia was met with uproarious criticism both by German and Russian environmentalists. Representatives of the civil initiative for environmental conservation of Germany said that passing radwaste to Russia does not mean it disappears.

Russian environmentalists are also against another load of radioactive waste from Germany. According to Greenpeace Russia’s Vladimir Chuprov, Germany is perfectly capable of safely storing waste on its own territory. It is not unthinkable that the new loads will lead to large protests.

“In any case, a rise in (transport) operations always carry risks. And I wonder what is foreseen in accident planning on the exclusion of possible incidents,” said Zolotkov.

The Russian vessel MCL Trader was specially reconstructed ad licences to transport spent nuclear fuel. It deadweight is 3,860 tons and it is 95 meters long.

The MCL Trader is famous for running aground in 2008 in Danish waters while en route from the Swedish port of Halmstad to St. Petersburg. The Danish Navy arrested the captain and the senior mechanic of the vessel on the suspicion they were operating it drunk.

Last week, at the same time the vessel arrived in Murmansk with its radioactive waste, Norwegian and Russian authorities were discussing issues of cooperation in the sphere of radiation safety between the two countries aboard the Lenin nuclear ice breaker, now a museum in the port of Murmansk. 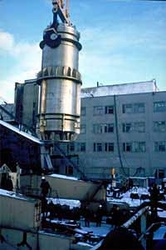 As it turned out, the Norwegians were again unaware that a vessel with potentially dangerous cargo would be sailing along its coast. A year ago, a lethal load was also sailed along the Norwegian coast to Murmansk, drawing an outcry from the Norwegian government that they had not been informed.

In remarks to NRK, Norwegian broadcasting corporation, the Norwegian Ministry of Foreign Affairs’ State Secretary Erik Lahnstein said Norway does not currently receive alerts on such cargos passing by its long coast.

According to conversations with the Norwegian agency for radiation safety, NRPA, information about the loads come from different and often accidental sources. A vessel with a dangerous load is tracked  my their Automatic Identification Systems (AIS) by Norway’s coast stations.

Lahnstein announced that it is necessary to conclude an agreement in order to have a clearer picture about where and when such dangerous loads will pass Norway’s coast.

“Norway was fair in raising the issue of the necessity of getting information about the passage of such cargos by its coast,” said Zolotkov. “Having invested huge amounts in improving and supporting nuclear and radiological safety on the Kola Peninsula (where Murmansk is located), Norway is within its rights to know about the sea transport of spent nuclear fuel along its borders.”

According to a NRPA spokesman, the passage of such cargos are kept secret until the voyage is complete.

“Information about the movement of spent nuclear fuel by sea and rail does not need to be ‘on line: it would be wrong for all who are curious to know were the cargo is,” said Zolotkov. “However it is not superfluous information for the public to know that such an operation has been completed, and that during its completion no irregularities occurred. This would prevent unwanted rumours and speculation that always arise in situations of absolute secrecy.”

A vivid example of the openness of such information was the cargo of highly enriched uranium delivered from Poland. A special detail – a photo of which appeared in the worldwide press showing how, and with what rigour the physical safety of the cargo was under guard. “The silence of the Murmansk middlemen for the transport of the cargo was not to their advantage,” said Zolotkov.

Russian authorities were informed about the operation.