Published on January 4, 2010 by Charles Digges 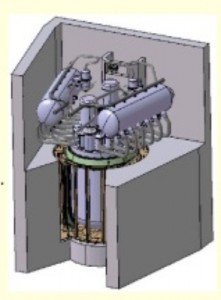 The 50/50 deal that was inked on December 25th will be named AKME Engineering. En+ is a part of the Basic Element Group.

The SVBR-100 favoured by the joint venture – and like so many other types of Russian fast reactors that have yet to pass from the drawing board to experimental stages – has been on slow percolation for many years, meaning, according to some analysts, that the design is already fatally out of step with contemporary reactor requirements.

The project also bears the kind of desperation that has characterised so many Russian nuclear efforts in the recent past – like floating nuclear power stations and the extremely unpopular Baltic Nuclear Power Plant – as the industry struggles against environmental norms to draw funding and maintain relevance as its stable of reactors grows older and its ability to store spent nuclear fuel decreases to nil.

The joint release, however, said the SVBR-100 is based on a reactor already in use on seven nuclear submarines, but did not specify which. Further calls for this information to Rosatom by Bellona Web were passed from spokesman to spokesman, none of whom could answer the question.

One spokesman did, however, confirm reports that a prototype of the reactor will be required to prove design improvements over its seafaring cousins, and that this reactor should be ready by 2019

According to the joint release by the companies, they will, “design and produce a prototype 100 MWe lead-bismuth fast reactor with a view to commercialize the technology,” World Nuclear News reported. 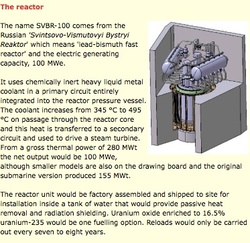 The SVBR-100 design favoured by the joint venture has been under slow development for many years, based on a reactor already used to power seven military submarines. A prototype is required to prove design improvements since marine use and this should be ready by 2019, said WWN.

The industry publication reported that small reactors with long operational capacities can be deployed in remote areas thanks to the long periods beyond refuelling. The idea is somewhat reminiscent of the long and failed Soviet flirtation with Radioisotope Thermoelectric generators (RTGs), which ended up dotting the Russian landscape with dangerous sources of strontium 90, which powered remote navigational beacons. It has taken seveal tens of millions of dollars in international aid to remove RTGs from the area of the White Sea near Murmansk and Argangelsk, where the RTGs themselves have been repeatedly vandalised by metal scavengers, leaving the highly active cores behind.

The units have been replaces by solar powered beacons. Russian, Finland and Norway are currently removing RTGs from the area of the Baltic Sea.

The industry release on the the SVBR-100 project also said the small reactors can be used in groups of up to 16 to create larger power plants in a step-by-step process.

Russia is meanwhile pressing ahead against vociferous protests from environmental organisations who say such remote plants are less accessible during emergencies as well as sitting-duck bait for terrorists.

The companies said in their joint statement that large scale production of SVBR-100 type reactors would be no more expensive that pursuing coal fired plants.

“We believe that the development of the nuclear power industry is one of the most promising ways to meet the rising demand for energy with the lowest environmental impact,” said En+ Group CEO Vladislav Soloviev in the joint statement.

Poignantly, the statement makes no mention of any environmental impact studies, or possible places and methods to store the extremely hot spent nuclear fuel that these reactors would produce.

Rosatom Deputy Director Peter Schedrovitsky chimed in in the release with the usual Rosatom plea for federal funding.

“We expect the government to provide strong support… It will be put on the list of projects under the aegis of the President’s Commission for Long-Term Development,” he said in the statement, according to WWN.

Kremlin officials would not comment to Bellona Web Tuesday on whether the SVBR reactor would be put on the President’s Commission for Long-Term Development, saying they had never heard of the project.

Currently, Russia is aiding China in the building of a larger fast reactor, and operates one of its own.