NEW YORK – Finland and Norway on Tuesday put together and signed a agreement to fund a project to remove nuclear power sources from Russian lighthouses in the Gulf of Finland, stepping up an effort to rid the entirely of Northwest Russia of the highly radioactive devices.

Published on November 11, 2009 by Charles Digges 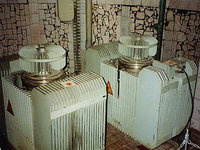 Norway’s Finnmark county and Finland had originally inked a preliminary agreement to undertake the efforts in April.

Norway, having funded similar projects in the Barents Sea, Tuesday pledged about €11 million, with Finland promising about €1.5 million, the Helsinki Times reported. The deal was inked on Tuesday, said the paper. If earlier Norwegian efforts to deal with this problem are any yardstick, the programme will likely be very successful in removing radiological hazards in Russia’s Northwest.

There are 87 nuclear-powered lighthouses in the Gulf of Finland, according to a spokesman for the Norwegian Ministry of Foreign Affairs. The deal between the two counties will include removing 71 of those 87 radioactive batteries, with the remaining 16 to be dealt with by funding from Russia and France, said the paper.

The Finnish government said in a statement in the Helsinki Times that the project would improve maritime safety and prevent terrorists from acquiring radioactive materials.

The effort of ridding Russian coastlines of these radioactive units is a Norwegian driven effort designed primarily by Bellona, which was among the first to sound the international alarm in a detailed report on them in 2003, which was updated in 2005.

Norway has assisted in removing the devices from both the Kola Peninsula, home to Murmansk, which borders on the northern Norwegian county of Finnmark. When the devices are removed, they are sent to Russia’s Mayak Chemical Combine in the southern Urals for long term storage.

The nuclear power sources for these lighthouses and other navigational equipment are called, in an official mouthful, radioisotope thermoelectric generators, or RTGs, and are powered by the radioactive elements strontium-90 or caesium.

RTGs – the brainchild of the Soviet nuclear energy machine – are essentially nuclear powered batteries that convert thermal energy from the decay of strontium elements into electricity. Hundreds were positioned in Russia along coasts lines and remote areas to power lighthouses, navigation beacons, and meteorological data collection installations, but that was decades ago.

In the upheaval following the fall of the Soviet Union, the bulk of these devices were abandoned as maintenance schedules were skipped and documentation on their whereabouts lost by Minatom, now Rosatom, and the Russian Defence Ministry.

As a result, they have lain – several years beyond their decommissioning dates – like radioactive landmines strewn across Russia’s distant regions.

Most RTGs in Northwest Russia are so aged that are not protected by fences and fail to post radioactive hazard signs.

Fashioned out of valuable metals like stainless steel and lead encasing highly radioactive cores, the units have been prey to metal scavengers who dismantle them to turn in the metal for profit, thus exposing themselves to high doses of radiation, as well as other who might happen upon the sites of the discarded cores.

In 2003, two RTGs were found near Murmansk literally ripped to pieces by metal scavengers, but were only found in this condition only weeks to months later during the Russian Navy’s Northern Fleet’s regular inspections of the devices.

The damage was so severe that Murmansk Regional officials designated the incident as a "radioactive accident." The scavengers made off with the depleted uranium casings for the strontium-90 elements powering them.

This highly radioactive strontium- 90 – emitting some 1000 roentgens per hours – was discarded at the site of both vandalised RTGs. Local Police and agents with the Federal Security Service, or FSB, said tha t the vandals would most likely turn up severely ill with radiation poisoning, or dead.

Another RTG mishap that underscored their danger occurred in 2005 when a box containing strontium-90 was discovered in the Murmansk Region village of Tri Ruchya.

And there are several other incidents that have gone largely underreported by Russian media wherein hikers or hunters run across RTGs in the woods, and use them for warmth, only to turn up in hospital hours or days later with acute radiation poisoning.

This was the case in the mid 1990s in the former Soviet Republic of Georgia, where small epidemic of hunters and shepherd were contacting radiation sickness from using orphaned RTGs to stave off the cold.

Since 1992, Norway has spent in the tens of millions of Euros to rid Northwest Russia of RTGS and replace the power sources for the lighthouses with solar energy. In August, officials from Norway and Russia declared that the northerly Kola Peninsula was free of radiological hazards posed by the lighthouses.

The 153 RTG that dotted the coastlines of the Murmansk and Arkangelsk Regions had been plucked out of their remote redoubts by helicopter and sea. In total, according to the Murmansk Regional Administration, the decommissioning of the RTGs removed 20 million curies of radioactive substances from the Barents Sea region.