MURMANSK – Despite assertive sound bites from Sergei Kiriyenko, head of Russia’s state nuclear corporation Rosatom’s that his agency is always fully receptive to talking openly with the public, experience shows Russia’s top nuclear authority is far from backing up its claims with any substantive communication.

Published on July 19, 2009 by Anna Kireeva, translated by Maria Kaminskaya 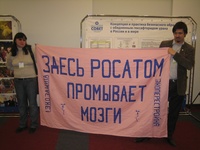 It has taken Bellona Web’s Russian desk two months to finally obtain answers to an inquiry sent to Rosatom’s spent nuclear fuel and radioactive waste management enterprise SevRAO, based in the Northern city of Severodvinsk, about efforts underway at the former naval bases in Gremikha and Andreyeva Bay.

These sites, located on the Kola Peninsula, have for decades served as temporary storage facilities for spent nuclear fuel burnt by the Russian Northern Fleet, and they remain among Russia’s gravest nuclear and radiation safety challenges.

The Q&A with Panteleyev is given below in unabridged form.

Q.: What is the general situation in Gremikha? A decision has been made to shut Gremikha down completely as a Northern Fleet base. What will become of the village?

A.: Answering this question is not within the authority of the [Federal State Unitary Enterprise] SevRAO’s director. In my opinion, a full answer to this question can be provided by the Administration of the [Closed Administrative Territorial Unit] Ostrovnoi (Gremikha) or representatives of the Ministry of Defence of the Russian Federation.

Q.: How much spent nuclear fuel (SNF) remains in Gremikha, what kind of SNF is it? What is the situation with liquid and solid radioactive waste (LRW and SRW) in Gremikha?

A.: There are around 250 fuel assemblies from pressurised water reactors and eight spent reactor cores from reactors cooled by liquid metal coolant (LMC reactors) remaining in Gremikha.
In December 2008, removed from Gremikha and delivered to the [Production Enterprise] Mayak were six TUK-18 containers holding SNF pre-treated for reprocessing.

In 2009, the removal of another six containers has been performed, and the removal of pre-treated SNF will be completed. As of present time, 176 cubic meters of LRW and 500 cubic meters of SRW are being stored at the site.
Plans are set for 2010 to 2012 to start removing SRW and begin preparations for the works involved in reprocessing LRW.

Q: Which steps will Rosatom take to clean this territory from nuclear and radioactive waste? Are there plans to remove SRW and LRW after all operations involving SNF are completed? Are there plans to clean Gremikha completely or is it still going to be a territory with certain contaminated areas, i.e., a “brownfield”?

A.: According to Rosatom’s plans, all nuclear fuel from Gremikha will be shipped out for reprocessing. Which is why there cannot be any “nuclear waste” here. The generated SRW (solid radioactive waste) and LRW (liquid radioactive waste) will be pre-treated, reprocessed, and transported out for interment or long-term storage in due conditions. A project of rehabilitating the territory of the site is currently being developed [and] a large amount of scientific studies and research are underway, according to the results of which a final decision will be made with regard to the degree of rehabilitation (“greenfield” or “brownfield”).

Q.: What about the LMC reactors? Have all the reactors been unloaded and if not, how much additional time will it likely take? Are there any reactors in an emergency condition?

A.: Two reactors with LMC remain to be unloaded, one of which is in an emergency condition. There are plans to unload one of these remaining two in 2009. According to the results, a decision will be made on how to proceed with the last reactor.

Q.: Will the Serebryanka be used to ship LMC out? If so, what exactly is supposed to be shipped? Is it SNF that is stored in protective containers or SNF that can be extracted relatively easily from dry storage tanks? Are there plans to use the floating technical base Imandra for particular operations?

A.: The technical maintenance base Serebryanka has been retrofitted to ship fuel from pressurised water reactors (PRWs) in TUK-18 containers. As of today, works are in progress to create a transport container for the transportation of spent reactor cores from LMC reactors. After such a container is created, a decision will be made as to what vessel to use to transport it. PWR fuel, as has been said earlier, has been removed and will be shipped by the technical base Serebryanka. The technical base Imandra, because of its dimensional specifications, will not be used for these purposes.

Q.: What projects are in the pipeline in the near future? Is Rosatom counting on some new international projects to finance them or will it be trying to cope on its own? How much money is earmarked for Gremikha by the Federal Target Programme “Nuclear and Radiation Safety” for 2009?

A.: In 2009, works will be performed to ship out the remaining pre-treated PWR fuel for reprocessing at [Production Enterprise] Mayak [and] the [spent reactor core] of one of the remaining reactors with LMC will be unloaded. Further plans include the removal of off-specification PWR fuel [and preparing] to ship out the [spent reactor cores] of the reactors with LMC for reprocessing.

Most of the works are being performed in close cooperation with France. There are no plans to reduce the scope of international cooperation in the future. In Gremikha, we are not working under the [Federal Target Programme “Nuclear and Radiation Safety”], but under a different programme. The money for 2009 has been budgeted and is being allocated.

Q.: Our last question – a routine question we ask: Why is it that Russian citizens, for instance, Bellona’s employees in Murmansk, cannot visit Andreyeva Bay? What do we have to do to get there?

A.: As you know, the site in Andreyeva Bay is a nuclear and radiation-hazard site and is not intended for excursions or pleasure strolls. Access to the territory is only given to the representatives of such organisations that are interested in cooperation with us [and] have concluded agreements on cooperation.

As for most of mass media outlets and non-governmental organisations, representatives or officials of Rosatom are regularly holding press conferences [and] meetings, where all issues are discussed.
The most recent of such meetings with Russian and foreign non-governmental organisations took place in the last 10 days of April in St. Petersburg, where (…) Kiriyenko gave exhaustive answers to all questions (including those regarding Gremikha).

“In other words, Panteleyev is letting us know that, as it turns out (…) Kiriyenko is the only one who ‘intimately’ knows the situation in Gremikha, and he is the only one who is capable of giving exhaustive answers to all questions,” said Ponomarenko.

“I was among those present at the dialogue forum in St. Petersburg,” he continued, referring to the event apparently alluded to by Panteleyev, the 3rd International Public Dialogue Forum “Nuclear Energy, the Public, and Safety,” which took place in April.

“And I can say that there was no dialogue there, but only a monologue. No understanding has or will apparently be reached any time soon between environmentalists and the nuclear industry. Kiriyenko was giving perfunctory answers to poignant questions posed by journalists and the public,” said Ponomarenko.

It is noteworthy, however, that when a number of protestors took to the state at this event with banners, who Kiriyenko’s staff tried to hustle off stage, they were allowed to remain at Kikiyenko’s own request.

Bellona Web in Russia is meanwhile preparing new questions, hopeful that the answers it will unlikely receive before year’s end will at the least shed new light on the situation at Gremikha an Andreyeva Bay.