In a little noticed boon for some sectors of the anti-nuclear movement, the budget blueprint that Barack Obama presented to Congress last week all but freezes further work on the almost three decade-old Yucca Mountain nuclear waste storage project, as part of a popular campaign promise that Yucca “was not an option.”

Published on March 2, 2009 by Charles Digges 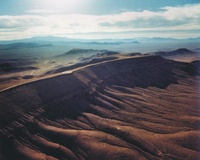 But the move also threatens to put the United States on an environmentally dangerous path that would imply reprocessing, as well as shipping its own nuclear waste abroad – most likely to Russia – within the parameters of a large multinational agreement led by Washington and Moscow, says Bellona’s nuclear physicist, Nils Bøhmer.

Nonetheless, the selection of the Yucca site was a process that is severely out of step with contemporary democratic procedures for selecting waste storage sites of such magnitude. The freeze on Yucca spending in Obama’s budget blueprint is another tick mark next to the list promises he made on the campaign trial, and is attempted to fulfill only 42 days into his presidency.

Though the budget blueprint does not completely sink the Yucca project altogether, the Obama Administration’s blueprint reads that "The Yucca Mountain programme will be scaled back to those costs necessary to answer inquiries from the Nuclear Regulatory Commission, while the Administration devises a new strategy toward nuclear waste disposal.”

The NRC will continue to examine the Yucca Mountain application, which was filed with the commission last year, an NRC spokeman said Monday.

Energy Secretary Steven Chu has meanwhile has said he has no plans to withdraw the license application, a move that could draw lawsuits from the nuclear industry, Energy Department sources said Tuesday.

The NRC has up to four years to review the application. The Bush administration had hoped to have the Yucca dump available for waste shipments in 2020.

Obama himself is on record supporting the continued storage of spent nuclear fuel at the sites where it is produced, until a suitable alternative to Yucca is found. Yet , to continue to keep waste in temporary storage, Congress would have to change the 1982 nuclear-waste law that cited Yucca Mountain as the only future waste repository.

Obama is expected to establish a commission to weigh alternatives, a White House official said in a telephone interview Monday. The US government has estimated the Yucca Mountain project’s total costs at $96.2 billion. About $13.5 billion already has been spent.

There are as yet no proposals from the administration about what to do with the approximately 57,000 tons of waste stores at more than 100 sites around the country, or with the some 2,000 tons of new waste that is generated each year.

Does dumping Yucca mean pursuing the GNEP?
The decision to drastically scale back spending on Yucca to a mere $288 million for the remainder of the current fiscal year is seen largely as being in line with Global Nuclear Energy Partnership (GNEP), a US-Russian driven initiative of 21 countries that want to see more nuclear power plants built globally, while keeping atomic weapons in the hands of a few. The plan purports to be a solution to global climate change by encouraging a massive built out of nuclear power plants.

The plan also assumes that one or several nations will take high-level waste for storage from these plants, the quantity of which would be reduced by reprocessing – something the United States banned under the administration of Jimmy Carter under the auspices of it harm to the environment.

The Administration official that the new president’s advisors “are taking a long, hard look and our position on the GNEP which would possibly include reprocessing.”

“We have no position on reprocessing as yet,” said the official who asked not to be identified, as no formal policy has yet been determined. “But the GNEP suggestions with many others are under consideration, and we will be evaluating these in coming months.”

Russia has been primarily targeting the some 80 percent of the spent nuclear fuel in the world that is controlled by the United States. The United States has balked at sending spent fuel it controls to Russia, but the GNEP would change that.

To each country its own waste
Though Bellona has indicated its opposition to Yucca as a flawed plan, it also doesn’t back a plan for the US that would take it down the path of the GNEP.

“Bellona still believes that each country should take responsibility for it’s own nuclear waste and, at the moment, the best prospect for storing spent nuclear fuel is deep geological disposal,” said Bellona’s Bøhmer.

“I would be very disappointed if Obama goes down the road with the GNEP and its emphasis on reprocessing. Let’s hope that the new administration uses the opportunity of freezing Yucca Mountain to create a new deep-geologic repository in the United States, and won’t ship it’s waste to Russia.”

But the GNEP has already received significant support from the Congress of the previous administration, which has pledged $100 million toward the formation of an international uranium fuel bank and reprocessing centre in Angarsk, Russia. Norway, which has pledge $5 million of its own toward the fuel bank, has also agreed to spearhead fundraising efforts for its completion.

Home field support
What to do about the over-budget and overdue Yucca project was a political flashpoint during the 2008 presidential race, with the three main candidates speaking out against it. Hillary Clinton, who lost the Democratic nomination to Obama, but who is his secretary of state, voiced her opposition to Yucca.

Even the defeated John McCain, Obama’s republican rival for the White House, spoke out against Yucca – at least while campaigning in Nevada.

Obama’s freezing of the Yucca project has been greeted with round enthusiasm among supporters at home, particularly Senate Majority leader, Democrat Harry Reid, who has been a vociferous opponent of Yucca since its inception 27 years ago, and which is located in his home state of Nevada.

“President Obama has made a critical first step towards fulfilling his promise to end the Yucca Mountain project, and I could not be happier for the people of Nevada,” said Reid in a statement on his senate website.

“Make no mistake: this represents a significant and lasting victory in our battle to protect Nevada from becoming the country’s toxic wasteland.”

John Ensign, Nevada’s Republican Senator told Nevadaappeal.com that the cuts are “a positive step for Nevada.”

“The Nevada delegation has been united in its fight to kill Yucca and have said all along that a new strategy is necessary,” he said. “I’m hoping that a scaled back Yucca is a Yucca that never happens.”

Nevada Congresswoman Shelley Berkley of Las Vegas, also  quoted on Nevadaappeal.com, said the $100 million Congress took out of the dump project’s current budget “will enable Nevada to land the knockout punch we need against this failed project.”

“Yucca Mountain is 20 years behind schedule. Its $100 million budget is bloated and support for this pile of radioactive pork has never been lower,” she said.

Who will pay off those who have paid for Yucca?
But, as Bellona USA Director Jonathan Temple pointed out, freezing the Yucca project present a complex dynamic of liability issues that could set off lawsuits against the government by the nuclear lobby.

The owners of the United States’ 104 nuclear reactors have signed contracts and paid more than $20 billion in fees in order to have spent fuel hauled away from their power plant sites to Yucca. The US Department of Energy  (DOE) has already paid millions in penalties for failing to remove the waste by the original 1998 deadline, and could face more than $11 billion in further damages if the waste is not taken away by 2020.

The Nuclear Energy Institute (NEI), the nuclear industry lobby, has said that if the Yucca’s license were revoked, it would consider bringing more litigation against the federal government.

With no obvious solution in sight, the NEI has called for a blue ribbon panel of its own to develop a ‘plan B’ in the next 1-2 years.

Yucca selection process out of step with modern site selection strategies
The selection of modern long-term spent nuclear fuel storage strategies involve a process that starts with an invitation to communities nationwide to express interest – a process that has been pioneered by Sweden, and is currently under examination in Great Britain, which itself is projecting a large nuclear build out.

As shown by the Swedish approach, local nuclear authorities responsible for geologic storage projects then engage with each community to conduct preliminary geological assessments of the surrounding area. A shortlist of possible hosts is then be drawn up, giving a range of project options with tailored benefits developed for each community.

Nuclear authorities then winnow down the list to one site, with a plan and a timetables. The crucial element to the selection process is that locale’s under consideration have the right to withdraw at any point.

The process to manage Sweden’s waste is currently nearing the step of picking from two sites eager to host an underground repository, Oskarshamn and Forsmark. Eventually Swedish high-level nuclear wastes will be sealed in copper canisters and embedded in clay plugs some 400 meters below ground in solid rock, World Nuclear News reported.

Site selection for Yucca Mountain hardly followed such an equitable path, WNN said. US legislation passed in 1982 mandated that the country have two permanent storage facilities – one in an eastern state, another in a western state – for its military, research, power and medical nuclear waste from 1998 on.

Several sites were considered, said WNN, but a Congressional vote mandated that the DOE focus just on Yucca Mountain – which immediately ignited 27 years of controversy and efforts by Nevada to block progress of the project.

Jonathan Temple, director of Bellona USA, contributed to this report