Perspectives on the handling of spent nuclear fuel in Russia

In the period of a decade in the USSR, and thereafter in Russia, problems have amassed in the area of the handling of spent nuclear fuel (SNF) and radioactive waste. According to statements by Rosatom, a long-term, officially accepted strategy for the handling of SNF (hereafter: “the Strategy”) does not exist. Consequently, an effective means of addressing the problem is also absent. At the end of September 2007, Rosatom officials considered and accepted a framework for the Strategy, but at present this document has not been revealed to the public.

Published on October 30, 2008 by Alexander Nikitin 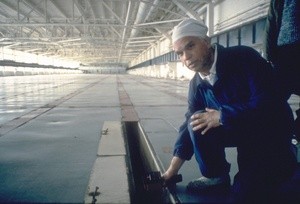 Bellona considers the problem of SNF extraordinarily important for reasons of ecological protection and public health, and the general public therefore should not be left out of the discussion. The following paper offers suggestions of the Bellona Foundation in regard to the strategy of handling SNF in Russia.

An Overview of the Problems

In the section entitled “Handling of Spent Nuclear Fuel and Radioactive Waste” of “The Strategy of Nuclear Energy Development in the First Half of the 21st Century” it is written that “closing the cycle of nuclear fuels acts as the strategic direction of the development of atomic energy in the Russian Federation.” This document was developed by Minatom in 2001. No other documents that outline a strategy of the handling of SNF exist today within the Russian atomic energy administration

It is known that the following mixed fuel cycles are used in Russia today:

In order to completely close the fuel cycle for all types of reactors, political, technical, and economic necessities must be substantiated. In our opinion, there exists no such justification, and its formulation is not possible for the following reasons:

1. The technological capability for closing the fuel cycle must be created practically from scratch;

2. Reprocessing fuel from RBMK-1000 reactors is inadvisable as the mass content of U235 is lower in spent form than in its natural state;

3. In order to reprocess fuel from VVER/PWR-1000 reactors, it would be necessary to construct a new factory at the cost of nearly USD $3 billion;

4. Waste from VVER/PWR-440, FBR, and transport reactors partially is reprocessed at the RT-1 reprocessing facility. In one year, RT-1 reprocesses eighty tons of SNF. At the same time, experts calculate that reprocessing SNF is economically viable only if the facility reprocesses no less than one-thousand tons of fuel in one year. USD $1 billion is required for the modernization of the RT-1 facility (for which there is nowhere to take). Therefore, the prospect of increasing the productivity of RT-1 is, at present, nil. By reprocessing fuel only from higher-rated reactors, the nuclear fuel cycle is not completely closed off; that is, the task of closing the fuel cycle remains unfulfilled. The basic situation today regarding fuel from transport reactors has changed drastically in comparison with Soviet times. The quality and quantity of these reactors, the quality of fuel and relations between the nuclear fleet and Rosatom are all changing; therefore, reprocessing of this type of fuel is becoming less pressing and very expensive.

In sixty years or atomic energy use, over 18,500 tons (uranium) or spend nuclear fuel has accumulated in Russia, the aggregate radioactivity of which is measured at around 7 billion Curie. SNF is generated by nuclear power plants, research reactors, and also in reactors of marine-based nuclear energy installations. 850 tons of SNF is accumulated annually in Russia. This fuel has a unique isotopic composition that depends on both the type of reactor in which the fuel was used and its original characteristics.

Railroads serve as the principal mode of transportation. A specially-designed container car is used for every type of spent nuclear fuel. At present, 59 different types of container cars are in use throughout Russia for the purpose of nuclear fuel transport. The paths of SNF transport run from nuclear power plants to Mayak and to the Krasnoyarsk storage facility. Additionally, upwards of 700 kg (uranium) of SNF are transported from the storage facilities of the Northern and Pacific Fleets to Mayak.

At the RT-1 facility, only spent fuel from reactor types VVER-440, FBR-350, FBR-600, as well as transport and research reactors, is reprocessed. At the design capacity of 400 tons per annum, the Mayak plant currently reprocesses only 80 tons of SNF every year. The plant has been operating for twenty-five years; its equipment is obsolete and requires replacement. Construction of the RT-2 facility has yet to be completed. Because the technology planned for use at RT-2 is now out of date, much doubt surrounds the need to spend any more money in completing  its construction.

The transportation of SNF costs, on average, USD $50 per kilogram. The yearly cost of storage for one kilogram of SNF approaches 120 dollars. Thus, storage of the accumulated 18,500 tons of SNF cost nearly $2.22 billion per year.

It should be pointed out that in 1998 there surfaced an initiative that advocating the transport of 20,000 tons of foreign SNF into Russia, for which Russia would receive $20 billion over ten years.

In order to address the problem of spent fuel amassing in Russia’s storage facilities, it is vital to create and maintain a long-term strategy for the handling of SNF.

The strategy should be formulated in consideration of three key factors that characterize the state of contemporary nuclear and radiological security in Russia:

(1) The absence of a federal system of control over nuclear and radiological safety in the course of atomic energy use (including the handling SNF).

(3) The need to solve the accumulating problem of SNF at the governmental level and the impermissibility of further postponement.

In the Strategy, fundamental principles and approaches to the problem of handling SNF must be accepted in order to define basic legal-organizational and economic mechanisms.

The following should be considered as the Strategy’s basic principles:

The plan for handling SNF should be maximally simple and safe. It must also be created with consideration of international practices and national realia.

To solve the problems related to handling SNF, it is vital to:

The Strategy of the Federal Special Program (FSP) “Ensuring Nuclear and Radiological Safety in 2008 and in the Period until 2015” considers three variants of a nuclear and radiological safety strategy. Unfortunately, not one of these variants considers the possibility of rejecting the reprocessing SNF or denying the implementation of a closed fuel cycle strategy.

Thus, our suggestions are intended for consideration in the program “Ensuring Nuclear and Radiological Safety…” as an additional variant that refuses the reprocessing of SNF. Extricated funds could be rerouted to environmental rehabilitation and carrying out other program measures.

A refusal of partial SNF reprocessing and a denial of implementing a completely closed fuel cycle strategy not only ensures noticeable economic profit, but also solves fundamental problems in ecological security and reduces the hazard of radiological contamination.