ST. PETERSBURG – Interior ministry officials yesterday halted Bellona activists who were photographing and measuring background radiation levels on a load of German nuclear waste that put into this city’s port on Thursday that was sent further by rail through some of the city’s most populous districts on its way to the Urals.

The activists were unable to get accurate radiation levels close to the containers of waste that were by yesterday waiting in a railway switching yard in St. Petersburg’s populous Avtovo region, as they were taken to a local police precinct.

But in what is a welcome departure from procedure, the activist were allowed by authorities to keep the photographs they had taken of the train laden with German depleted uranium hexafluoride, or uranium tails, as it wended it’s way through the maze of some of St. Petersburg’s most densely populated southern districts. 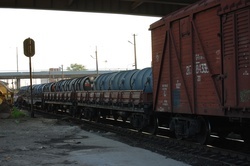 The waste train photographed by Bellona’s St. Petersburg office contained 1000 tons of uranium tails sent from Urenco as part of a contract between the company and Russia’s uranium enrichment giant Teksnabexport (Tenex) that Russia receive 100,000 of Urenco’s waste.

The current load arrived in St. Petersburg’s port last week aboard the German freighter Schouwenbank amid mounting protests in St. Petersburg and Germany. The shipments have become more regular as Urenco tries to unload some 20,000 tons remaining on its contract before it expires next year.

The waste has been slated for reprocessing and export back to Germany, but this has happened in only a handful of instances early in the contract. For the most part, the uranium tails remain in Russia, many of which are stored in the open air – something Russia’s own nuclear regulatory body, weak as it is, has stated, “does not correspond to contemporary safety requirements.”

Urenco could store the waste itself, but the storage would drive up it’s own production costs by five times, according to company estimates given to the Russian environmental group Ecodefence.

Sergei Kiriyenko, chief of Russia’s state nuclear corporation Rosatom has said Urenco’s contract will not be renewed – something that environmentalists view as an encouraging sign that Russian nuclear officialdom are finally admitting that the material is only landing in Russia for storage.

Yet, it remains unclear whether Russia regards the material as waste or raw material for reprocessing. Most European countries do not, but the United States does. Russia at present seems to be sitting on the fence.

So far the imports have slid past Russian legislation banning imports of pure nuclear waste under the designation that the loads of uranium tails are raw material for reprocessing.

But another company, Eurodif – a subsidiary of France’s Areva – has a contract to continue importing uranium tails to Russia until 2014, and Kiriyenko has so far remained mum about the disposition of this agreement.

Environmentalists say that for Kiriyeko’s statements of last week – when he promised to not renew Urenco’s waste import contract – to have any biting teeth he should cancel France’s imports as well.

It is believed that the waste train currently parked in Avtovo will be heading to Novouralsk, near Yekatrinburg, where the Urenco waste has been gathering since 2003, German environmentalists and Russian nuclear industry authorities have said. Other shipments from the German and French contracts have been sent to Angarsk, near Irkutsk, Seversk, near Tomsk, and Zelenogrosk, near Krasnoyarsk.

The disposition of this waste – like most nuclear waste in the world – remains uncertain as no country on the planet has yet developed an effective method for safely storing radioactive waste for more than 50 years, falling several hundred years short of the time such waste reaches its peak toxicity.

Renata Goroshkova contributed reporting from St.Petersburg for this report, and Charles Digges wrote and reported from Oslo.
.