MOSCOW – In the hours preceding what was hailed as yet another “democratic transfer of power” by the western media, as Vladimir Putin handed the reins of power to his hand picked successor Dmitry Medvedev, an agreement for civilian nuclear cooperation was signed in the shadow of the pomp of the new president’s inauguration and the nuclear missiles to be comically and anachronistically paraded across Red Square on Victory Day. 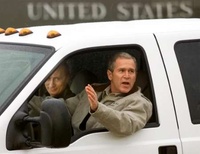 The US and Russian governments signed a long awaited agreement that will allow the US nuclear industry to make money off Russia’s industry and get rid of it’s radioactive waste by sending it to their Cold War foe. The agreement was touted by more credulous media as a surprise breakthrough harbinger of a new peace and a new age.

Medvedev was sworn in on Wednesday. But after eight years under the rule of a former KGB officer, many democratic freedoms previously enjoyed by Russians were overturned. Environmental organisations, which were traditionally on the vanguard of the democratic movement, found themselves pitted against authorities, protesting the import of radioactive waste into Russia and discovered their role in the new society to be significantly weakened. They awoke to find themselves operating in the margins and on the edge of survival.

As could be expected, Putin’s last day full day as president on Tuesday, May 6th didn’t pass without some new shadowy – but ultimately choreographed – PR coup. The civilian nuclear cooperation deal was signed between outgoing US Ambassador William Burns – who himself was playing his own swan song in his last official act – and Sergei Kiriyenko, head of Russia’s state nuclear corporation Rosatom.

On the surface – the one that got the predictably awed reception from western press organizations that hardly bothered to scan beyond the bold headlines of the Kremlin and US Embassy press releases – the agreement allows for civilian nuclear cooperation between the two counties that a generation ago were seen as the purveyors of certain nuclear Armageddon. The photo opportunity was priceless, but the significance of the moment, for Russia at least, had literally the substance of the trophy fish on the walls of bloated Washington bankers and legislators.

Looming behind the handshakes and the swell new fountain pens with which the agreement was signed laid the fine print, which decimated on the level of the Russia Federal Government any remaining obstacles to opening up Russia’s borders, with a Texas-style “come on down,” to the long term import and storage of most of the world’s spent nuclear fuel – 70 to 80 percent of which is controlled by the United States.

Some 200,000 metric tons of spent nuclear fuel has accrued throughout the world since the beginning of the nuclear age. Fiftenn thousand of it is in Russia. For the past 30 years, the United States has been researching, designing and digging the fruitless long-term geologic storage facility at Yucca Mountain in Nevada. Despite the fact that the sum total spent on this project so far exceeds $20 billion, no progress is visible. In fact, accord to shamefaced admissions by the US Department of Energy (DOE), if Yucca Mountain were to open tomorrow, another would have to be dug almost immediately to begin to accommodate the American SNF that has been piling up since the Yucca Mountain project was announced.

That being the case, Russia’s grand gesture last Wednesday, which flung open the doors for US radioactive waste, will most likely prove itself to be very timely for nuclear junk brokers in Washington and nuclear junk buyers in Moscow in the near future.

The Russian state news agency RIA Novosti breathlessly called the event “an impressive nuclear accord” occurring “on the last day of the presidency of Vladimir Putin.” In fact, the order to hammer the accord into shape was given before the Group of Eight industrialized nations meeting in St. Petersburg in 2006. It can therefore be stated with reasonable certainty that the signing of the document on Putin’s last day in his impressive Kremlin office was a well orchestrated sham pulled off by Russia’s judo master and his soul penetrating pal George Bush – whose days as US president are also in their twilight.

True, in order to make the deal concrete, a few noisy lawmakers in Washington whose attitude toward last week’s magic trick has always been sceptical, need to be brushed off.

But despite the bluster and posturing over missile shields and the cost of Eastern European real estate for NATO, maybe Bush did see Putin’s soul, as he famously proclaimed after looking into the Russian president’s eyes for the first time, and noted there the twinkle of another huckster with a flare for political theater. Bush could therefore be counted on in the year after the summit to help his Russian confrere keep the secret of the radioactive rabbit Putin pulled out of his hat the day before bowing and leaving the stage.

In our opinion, becoming the radioactive dump for the rest of the work is a tragedy for the current and coming generations of Russians. And this tragedy has yet to be acknowledged. Russian citizens’ battle against letting their country become an international radioactive waste dump still lies ahead – it will begin when society ceases to extol the name of Putin and soberly looks at what he has left behind him.

One part of his inheritance is Kiriyenko and his management of the nuclear industry. And there is no doubt that as soon as it becomes clear that public opinion spills out of the kitchen and onto the streets, Kiriyenko will be in dire straits. They’ll toss him to the wolves – and not, by the way, for the first time.

For those who live in day-to-day Russia, a serious event has occurred. But for Putin and Bush, it’s just another day of swindle and mendacity at the office. Business is business. America nuclear companies will make a cash cow in Russia, selling technology (all hail those who made the peaceful Russian atom, and who assured us in their fatherly tone that life here was so much better than was over there) and sending us their waste.

In exchange for shipping its spent nuclear fuel to Russia, the United States told Russia it could sell a little bit of uranium fuel on the US market, and Russia obediently let Washington fasten the leash and bring Moscow to heel. Like they say, behave yourself, Iran is facing sanctions that you will support, and then over time you’ll be able to sell more fuel. But Kiriyenko and Putin aren’t ashamed because money and shame are mutually exclusive. These two are like the rest of Russia, making money and closing their eyes to the rest of this rubbish. Only time will be the judge.

As in the USSR, Russians display their conviction only when they are sitting around the kitchen table – that famous and time-honoured rostrum of Russian dissent. It is there and over the telephone that Russians will firmly say “No” to the import of nuclear waste. But on the street they are silent. So why would Putin be worried about their opinion? As soon as such national humiliation automatically becomes the stuff that leads to mass manifestos is when Russia will cease to be the world’s nuclear dumping ground. It must simply be understood that it was certainly not Bush and Putin who build a nuclear outhouse in Russia – it is the Russians themselves who have this on their heads. As soon as this realisation occurs to them, things will improve dramatically.