ST. PETERSBURG – A guard with a gun attempted to disperse environmentalists who were measuring radiation levels on a train load of depleted uranium hexafluoride – called uranium tails – and hanging protest banners in this city’s populous suburb of Avtovo on Saturday.

Published on March 16, 2008 by Bellona, translated by Charles Digges 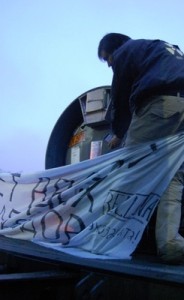 The protesters with Bellona and other Russian environmental groups were accosted by the guard bearing an AK-47, who cocked and pointed the weapon at the environmentalists who were filming the results of their radiation measurements – which exceeded background radiation levels by 30 times. The armed guard was travelling with the load as specified by law.

Bellona and Ecodefence have been following the load of uranium tails since it put into the port of St. Petersburg on Friday filled with waste from Germany’s Urenco enrichment facility in Gronau. Bellona and other Russian environmental groups demand the transport of the radioactive waste be ceased immediately.

Environmental protesters where hanging a banner emblazoned with the phrase “No to the import of nuclear waste” on the train platform in Avtovo, a thickly settled suburb of St. Petersburg where the train had come to a stop.

The machine gun bearing platform guard approached the environmentalists and demanded they cease filming. He then cocked and pointed his weapon at the cameraman. (VIDEO: link, PHOTO: link)

The dangerous cargo was parked in a place where local residents regularly cross the railroad tracks so as not to walk across an elevated railroad bridge.

Bellona and Ecodefence activists measured radiation levels around the containers as high as 680 microroentgens per hour – exceeding normal background radiation by more than 30 times.

When the containers of depleted uranium hexafluoride, also known as uranium tails began their journey from Gronau, Germany they were followed by protesters and activists who measured their radiation levels with Geiger counters. In Munster, environmentalists got readings of 164 microroentgens an hour while measuring the same containers at a distance of five metres.

In 2006, Greenpeace picked up a measurement of 40 times more than normal background radiation while testing train cars carrying depleted uranium hexafluoride at the Kapitolovo railway station near St. Petersburg. 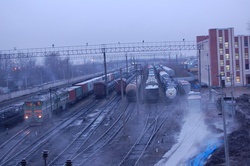 Kiriyenko said last year that he would sign no new contracts with Urenco or the French Eurodif enrichment firm for delivery of uranium tails, thus admitting indirectly that the initial agreement was a mistake.

Nevertheless, the conditions of the contracts, which expire in 2009 and 2014, are unknown and no one can say whether it contains language for its automatic renewal.

Russia is the only country in the world that accepts uranium tails from abroad on an industrial level. The United States considers uranium tails to be radioactive waste by a decision of the US Nuclear Regulatory Commission on January 18th 2005.

Depleted uranium hexafluoride, or uranium tails, are what is left over after the enrichment process for power producing uranium is complete.

Russia has already amassed some 700,000 tons of uranium tails form within the country and abroad, for which there are no long terms plans, meaning most of the tails are sent here as waste.