ST. PETERSBURG – Vitaly Servetnik, a representative of the Murmansk regional organisation Nature and Youth, was detained by police at 1.30 pm Thursday on his way to attend a meeting with Norwegian Prime Minister Jens Stoltenberg – despite the fact that his appointment had been fully sanctioned by the Murmansk regional administration.

Published on June 7, 2007 by Rashid Alimov, translated by Maria Kaminskaya 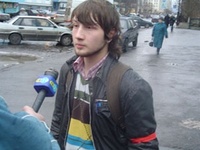 The primary goal of the meeting was for Servetnik to simply pass on an open letter from his organisation to the Norwegian Prime Minister before he left the country after trade talks.

Dressed in plain clothes, several members of the regional Organised Crime Bureau detained Servetnik just seconds prior to the meeting when he arrived at the Murmansk Marine Passenger Terminal. The men explained he was detained “on suspicion of an armed assault yesterday.”

“Apparently, the authorities where not pleased with the idea that these words could be said directly to the head of state of a neighbouring nation that dispenses large annual donor funds in the Murmansk region,” wrote Vladimir Slivyak, co-chairman of the environmental organisation Ecodefense! in a statement he wrote on the incident for Bellona.

“(Authorities) were displeased with the fact that these words could have a direct impact on donor relations in the near future,” wrote Slivyak, who co-authored the open letter with Servetnik.
Russian have yet to comment on the detention.

“One would have to be exceptionally stupid not to realise that the letter will all the same make it to the Norwegian Prime Minister, “said Slivyak.

“Or perhaps someone is hoping that after putting the squeeze on (Servetnik) he will roll over and play dead.”
Indeed, news about the incident was passed by Bellona to the Norwegian Consul General in Murmansk, Rune Osheim, who then sent the information along to Prime Minister Stoltenberg and also called Murmansk’s Oktyabrsky Police Department, where the environmentalist had been taken.

At this time, the ecologist is now free. However, he was too late to attend his meeting with Stoltenberg and the governor of the Murmansk region, Yury Yevdokimov.

“This is an odd move, from the point of view of the law: The environmentalist was detained for one hour, the police obtained his statement, [but] no record of the questioning was made,” said Bellona’s legal counsel Olga Krivonos.

“Then he was let go, but only because calls had been made from the [Norwegian] Consulate, commenting on the detention.”

Russian and Norwegian officials have yet to comment on the detention of Servetnik.

At the meeting, which was pre-arranged by the administration, Servetnik was to present to Stoltenberg a letter prepared by his organisation that outlined Nature and Youth’s position regarding the development of the energy economy of the Murmansk region, as well as expressed support of Bellona’s position concerning the dangerous situation with the nuclear hazards at the former Russian naval base Andreyeva Bay.

Below is the text of the letter that Servetnik was going to pass to Stoltenberg. Please note that the letter’s English text, while obtained by Bellona from Nature and Youth, has been proofread and includes certain corrections for the reader’s convenience.

Since its inception in 2000, Nature and Youth has been working with issues relating to energy safety. The organisation’s activists have maintained correspondence with officials of the Kola Nuclear Power Plant (Kola NPP) and the Rosenergoatom (Russia’s nuclear power plant monopoly – ed.) concern. Nature and Youth has also addressed the Murmansk Regional Prosecutor’s Office requesting that prosecutors look into the legitimacy of extending the service periods of the two Kola NPP reactors. Prosecutors confirmed that our doubt was not without merit and said that the licenses that had authorised the decision to extend the operation terms of the plant’s Reactor Blocks 1 and 2 had been granted unlawfully as no environmental impact assessment had been carried out. Nature and Youth organised several rallies, seminars and summer discussion camps to express the organisation’s deep concern regarding the illegal work of the dangerous site.

Foreign countries have been constantly rendering financial help to Russia’s aged nuclear sites because such sites require constant subsidies. This financial help is frequently misspent. For example, the funds attracted to prepare the Kola NPP for decommissioning were in the end spent on various procedures to extend the life terms of its old reactors. In no Western country would these first-generation reactors have received an extended operational license, because they cannot be upgraded enough to meet today’s safety standards.
In the meantime, the government of our country intends to spend the country’s stabilisation fund to build new NPPs. Another NPP is planned to be built on the Kola Peninsula. Even though the type or the capacity of the future reactors are yet to be chosen – and the opinion of the local population yet to be taken into account – the construction is referred to as if it is already a decided matter. We are deeply concerned with the possibility that experimental reactors of types not yet in existence may be chosen for construction, while their safety is impossible to guarantee.

OUR POSITION AND PROPOSALS:

1. In our opinion, Norway should stop any support of the Kola NPP, except for the funds intended to take it out of operation and dismantle the reactors. As a donor, Norway alone can influence the situation with its financial policy, as well as persuade other donors to do the same.

2. Norway should certainly demand that Rosatom present documentation pertaining to its plans of new NPP construction and should itself examine the way these plans address issues of safety.

3. Instead of supporting the nuclear industry, Norway should give priority to supporting programmes aimed at developing renewable energy sources on the Kola Peninsula.

In conclusion, our organisation shares Bellona’s concerns regarding the situation at the radioactive waste and spent nuclear fuel storage site at Andreyeva Bay, where, according to Russian scientists, an uncontrolled nuclear chain reaction, or a small nuclear explosion, may occur. We believe that top-level Norwegian-Russian talks are in order to discuss the condition of the site.

Sincerely,
Vitaly V. Servetnik
Chairman of the Board, Priroda i Molodezh (Nature and Youth)