TOMSK. – Ecologists from 10 Russian cities gathered today in the centre of Tomsk to rally against imports of radioactive waste into the country. To stop the protest, local police used methods of violence – as was witnessed by the reporter – and arrested 12 activists, including co-chairman of the environmentalist group Ecodefense! Vladimir Slivyak.

Published on July 31, 2006 by Rashid Alimov, translated by Maria Kaminskaya 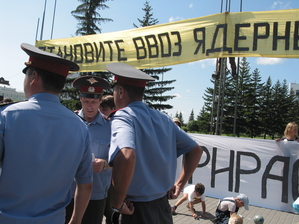 At 1 p.m., environmentalists spread in front of the local administration building two 40-meter banners saying "Stop nuclear waste import!" and "Must Russia grow tails?" The action’s aim was perceived to attract attention to the problem of nuclear waste import to Russia, particularly to the Siberian Chemical Combine located in the Tomsk region. This facility imports so-called “uranium tails” – waste generated during uranium enrichment – from France and Germany.

One of the banners was fixed on poles at a 10-meter height, while the other was spread below. Several passers-by joined the protesters, telling reporters they supported the environmentalists’ position. The rally carried on for thirty minutes before police broke it up. Tomsk policemen tore one of banners and arrested 12 participants. 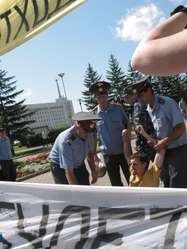 “We have already suffered from the activities of the Siberian Chemical Combine: Several villages are polluted by the radiation from the 1993 accident, but nobody has yet been evacuated,” said during Ecodefense!’ rally Zinaida Kolomoitseva, a resident of the nearby village of Naumovka and an environmental activist. “We must stop the combine’s dangerous activity before people all over Russia find themselves in the same situation.”

Naumovka – just like the neighboring village of Georgiyevka – have felt the impact of the accident at the chemical combine since April 1993. A lawsuit filed by Naumovka residents to the European Court of Human Rights is now being considered in Strasburg. The court has recently sent an official query to the Russian government asking to account for the prolonged period of time it took to examine the case within the Russian court system.

Naumovka residents are litigating through Konstantin Lebedev, a Tomsk attorney who had earlier represented the villagers of Georgiyevka and won on his claim for damages on grounds of the harmful effects of the 1993 accident.

“The Russian trial took a long time, but the court did not take into consideration the scientific evaluations that evidenced the impact of the chemical combine’s activities on the villagers’ health,” Kolomoitseva told Bellona.Ru. “People in Naumovka are deeply depressed. After the birth of the two-headed calf in May, few expect any good coming to the village.”

Valery Konyashkin, an expert with the Tomsk region’s ecological department, commented the situation to Bellona.Ru by saying: “It seems to me that we are in for a serious backlash on the part of the state.”

According to Konyashkin, the nation continues to build the so-called “power vertical” – this moniker, introduced several years ago by Russian President Vladimir Putin, denotes a push for strong centralization of government power accompanied by what critics point out are signs of a sharp turn toward the Soviet-time totalitarian methods.

“Soon, it will become much harder to fight for the public’s ecological interests,” he said.