In a series of recurring thefts and acts of vandalism of nuclear installations in the Murmansk Region of Russia, a box containing strontium was found outside the Rezets factory in the regional village of Tri Ruchya, the Barents Observer newspaper reported. 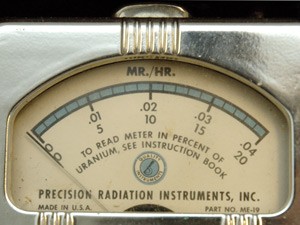 The box, marked radioactive, was discovered on Monday, said the paper, and specialists from the Russian Ministry of Emergency Situations were summoned. Inside, they found several metal plates imprinted with the inscription strontium. The officials removed the box to safe storage.

According to the Russian news web site, Murmannews.ru, the Emergency Ministrys further tests indicated that the strontium plates were of low radioactivity and used for control material to test the effectiveness of radioactivity testing dosimeters.

It is as yet unclear how the box of strontium came to be discarded outside the Rezets factory or how long it had been there, local law enforcement officials in Murmansk told Bellona Web in a telephone interview.

A criminal case has been opened to determine how the material got into the loose, a spokesman for the Murmansk police said Thursday, but indicated there were few leads.

The spokesman also confirmed that the recovered strontium was of low radioactivity, but nonetheless expressed concern about the security of nuclear materials in the region, especially strontium.

In both cases, which occurred in November 2003, the highly active strontium-90 elements were recovered on open beaches nearby. The elements were returned to the manufacturer of the already dilapidated RTG units.

RTGs and their strontium continue to be a nuclear security headache in Russia largely because the units themselves are well past their engineered life-spans and many are simply unaccounted for due to poor accounting practices by Russian nuclear authorities.

The local government of the Finmark Region of Northeastern Norway has over the past several years done much to help replace strontium powered RTGs in Northwest Russia with units powered by solar energy. The United States Department of Energy has also pledged several million dollars to help locate and clean up RTGs along Russias Pacific Coast.