MURMANSKDonor nations taking part in last months Contact Expert Group (CEG) of the International Atomic Energy Agency (IAEA) reached a consensus that the basic decisions regarding the Lepse floating nuclear fuel storage facility will be handed over to Russia.

The Lepse, a rusted out nuclear icebreaker spent fuel storage ship that has for decades acted as a floating facility holding tonnes of damaged or corroding nuclear fuel assemblies. The vessel has been a lightning rod for international concern and efforts to coordinate its safe dismantlement. Russia will now be responsible for designing technical plans for its dismantlement and for appointing contractors to deal with the various design stage tasks. Bellona-Murmansk was present for the discussion of dismantlement possibilities that took place during the CEG workshop held from May 24th to 26th.

Such meetings allow us to adjust the efforts of international agencies, to exchange information, and define the development of new projects directed at the problems of decommissioning, said CEG chairman, Alan Heyes.

Participants of the workshop visited the Nerpa shipyards. They had also wished to visit Sayda Bay to view progress on a future storage site for reactor chambers for dismantled submarine, but were denied permissionwhich could not but arouse irritation from the countries sponsoring the project.

Sayda Baya cove on the White Sea where many submarine reactor compartments from the Gremikha former naval base are currently stored afloatis currently undergoing an overhaul that will move these reactors to onshore storage. The 300m Euro funding deal was inked between Russian President Vladimir Putin and German Chancellor Gerhard Schroeder in 2003.

We received no explanations whatsoever. It was very important for us to have a look at the scale of the work taking place, chairman Heyes commented in an interview with the Murman television network.

It will be better if we return after everything here is ready. On the other hand, at Nerpa we got a lot of work done and saw everything we wanted to.

Representatives from Bellona were allowed to be present only for that part of the CEG workshop that dealt with the decommissioning problems associated with the Lepse floating maintenance vessel.

Nevertheless, this demonstrates a change in Rosatoms attitude to representatives of non-governmental organizations, and gives us hope that Rosatoms policies in the future will keep changing towards openness as well, said the head of Bellona-Murmansk, Sergei Zhavoronkin. 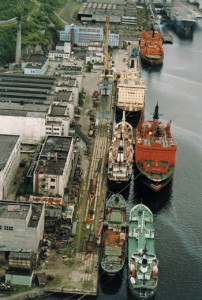 Nuclear Maintenance Vessels
Nuclear maintenance vessels (ATOs in their Russian acronym) are used for recharging reactors of nuclear submarines and icebreakers while at sea. ATO vessels also have onboard storage compartments for spent nuclear fuel and radioactive waste.

Significant problems in developing decommissioning strategies for these vessels are presented by their sheer variety, their significant numbers, as well as the facts that the ships are based in multiple locations across the area and belong to two different institutions  the Russian Navys Northern Fleet and the civil Murmansk Shipping Company.

At present there are 72 ATOs in service or in reserve, including floating containment vessels for liquid radioactive waste. More than 50 of these ATO vessels have served beyond their projected engineering life spans and await decommissioning. Of these ATOs, 28 are either damaged, submerged, or are listing on the edge of sinking.

Currently, no kind of approved and tested technology for the decommissioning of these ships exists. Long-term containment vessels for the radioactive waste generated during the decommissioning process are also lacking. During the CEG workshop, representatives from the Murmansk Shipping Company stressed that, before decommissioning work can begin, it will be imperative to create safe sites for the mooring of ATO vessels along the coast.

Problems of decommissioning the Lepse
The most problematic of the ATO vessels is the floating maintenance base Lepse. In its storage holds lie 639 heat-emitting spent nuclear fuel assemblies, some of which are damaged, making the process of extracting them by conventional means impossible.

In all, over 250 kilograms of Uranium-235, 8 kilos of Plutonium-259, and the fissile byproducts of these isotopes are stored onboard the ship, which itself was built 69 years ago. The Lepse is moored near Murmansk at the Atomflot repair and maintenance facilitysome 5 kilometres north of the city of Murmansk itselfand presents a danger not only to the regions center, but for the whole Russias Northwest.

As opposed to other international nuclear safety projects, which have been carried out successfully in Murmansk region, the Lepse project is moving forward with difficulty, despite the fact that over 12m Euro have been allocated to its safe dismantlement.

In my opinion, a significant error was allowed to occur in the past, said Mustafa Kashka, deputy director of Murmansk Shipping Companys Department of atomic fleet exploitation.

From the very beginning, projects relating to radioactive waste and decommissioning of the vessels were developed by international organizations. The question of license documents, which could satisfy the demands of our oversight and control agencies, became an obstacle.

A difference of opinion between Western contractor, Frances SGN company, which was working to offload from the Lepses storage holds and the Murmansk Shipping Company, which coordinates the programme from the Russian side, began to arise in 2004.

SGN insisted on the creation of a so-called basic accounta document, which failed to satisfy Moscowand ignored demands from the Russians to develop documents necessary for the affirmation of the project in Russia.

Today it is clear that SGNs basic account does not allow for the assessment of risks connected within the operation, said Bellona-Murmansks Zhavoronkin during his presentation at the CEG workshop.

Therefore, the most efficient and cost effective means to accomplish this is developing variants of the project that correspond to Russian demands and are formatted to Russian normsa Russian version of the basic account. Russian documentation can be verified and evaluated by Western specialists. This evaluation should be enough to allow the donor-nations to decide which of the variants to finance.

Otherwise the situation with the implementation of the project just turns into ecological tourism. The projects money gets spent on signing papers and delegation visits, said Zhavoronkin.

In Bellonas opinion, it is necessary to reform the Lepse decommissioning project, carefully assessing a minimum of two principle variants, one that would include unloading the spent fuel and another that would not. The variant of leaving the fuel aboard has been analyzed for Bellona by a former engineer of Murmansk Shipping Companys Special Technical Oversight Group, Yuri Chernogorov.

In his presentation at the workshop, Zhavoronkin also recounted the history of The Lepse village, a project carried out by Bellona with the cooperation of the Murmansk Shipping Company. The project completed onshore living quarters for the crew of the Lepse, which had been living on and manning the ship in preparation for its decommissioning, and had been receiving receiving elevated doses of radiation.

Of the variants for dismantling the Lepse discussed by the CEGoffloading the fuel before sawing the ship up into parts and breaking the ship down prior to offloading the shiprepresentatives of the Murmansk Shipping Company preferred the former. They said this variant would allow the liquidation of the floating, ecologically dangerous vessel over a shorter period and offloading of spent fuel from the storage holds on the Lepse into safer on-shore conditions.

At the workshop, possible locations for the decommissioning work were considered, including facilities at Atomflot and the Nerpa shipyards. Nerpa was preferred because of its experience with dismantling nuclear submarines and its developed infrastructure for carrying out such work.

The main result of the workshop was that donor nations reached the conclusion that basic decisions in handling the Lepses dismantlementthe so-called executive stage that includes preparing agreements on technical agreements and design decisionswill be transferred to the Russian side. In the coming months, Rosatom will name a consortium of Russian contractors. Each contractor will take the responsibility of carrying out a specific phase of the project.

The Murmansk Shipping Company believes this is a tried and true practice in Russias Northwest, and has shown positive results in building spent nuclear fuel storage facilities.

We, for example, are in this manner already carrying out operations to build storage for spent fuel at Atomflots base, said Murmansk Shipping Company head Kashka. The construction phase of this project is already ahead of schedule, and completion of the facility is planned for April of 2006. A public environmental impact study of this project was recently carried out by Bellona-Murmansk.

Zhavoronkin commented that: We are hoping that public environmental impact studies and public hearings will be conducted for the Lepse decommissioning project, and we are planning to take part in them.

Kashka told Bellona Web that he had hoped developments toward a more precise approach to dismantling ATOs would arise. Specific proposals, he said, were not discussed, as the goal of the CEG meeting was to define tasks. This, he said, was satisfactorily accomplished.

It is possible that the discussion of specific proposals will come into the agenda of the next CEG workshop, said Kashka.

The heavy nuclear cruiser Admiral Ushakov
Another issue discussed during the workshop is dismantlement of the retired surface ships that run on nuclear power. The most pressing example is the missile cruiser Admiral Ushakov, which has been moored near the Zvezdochka shipyard in Northwest Russia for the last six years. It has two reactors filled with spent fuel on board.

Experts from Zvezdochka say at least $40 m are needed to complete the dismantling of the Admiral Ushakov. project. It was originally planned to start in 1999. However, a group of Russian parliamentarians lobbied to rescue the vessel from dismantlement. They established a fund to raise money for upgrading the cruiser, but their efforts hit a wall in 1991 when it was decided by Moscow that modernising the vessel would not be expedient. The Admiral Ushakovs present condition is far less environmentally hazardous than the bulk of Pacific nuclear submarines awaiting dismantlement.

But Zvezdochka wants to get on with the dismantlement.

The fact that the cruiser has been long left without maintenance has a negative impact on its systems and machinery, Zvezdochka representative Nikolay Kalistratov told the CEG workshop.

The systems and machinery, providing buoyancy to the ship dont meet the technical standards.

According to Kalistratov, lack of funding resulted in defects in fire protection and buoyancy systems, while corrosion is eating away at the cruisers hull.

The main obstacles to dismantling the Admiral Ushakov are a lack of experience in dealing with such projects, which are far more involved than submarine dismantlement. The sheer size of Russias decommissioned nuclear powered surface vessels mean they have to be dismantled they cannot fit into docking facilities and must be dismantled while still afloat.

Furthermore, there is no legal documentation governing the recharging of reactors aboard such vessels that have never been recharged. Specialists are also wary of the large amounts of toxic waste that could be generated during dismantling procedures.

Despite this, Zvezdochka representatives say their shipyard has the experience to cope with the task. Zvezdochka proposed a plan of co-operation with donor nations and said they will organise an expert meeting to take place in the Northwestern naval city of Severodvinsk next month.