The joint effort to dismantle Russias estimated 1000 RTGs falls under the common goals of the Group of Eight industrialised nations Global Partnership programme to lock down Russias proliferation hazards entirely over the next eight years. The US Department of Energy (DOE) got on board with the RTG dismantlement effort along the Eastern part of Russias Northern Shipping Route in 2004, to the tune of some $40m.

American support has already jump-started the building of a site for interim storage garnered from decommissioned RTGs in the Russian Far East—the DalRAO site near Vilyuchnisnk created in 2000 to handle radioactive waste from Russias rusted out Pacific Fleet submarines.

It is something of a mystery, therefore, as to why the March 14th to 15th conference, held at the Russian Academy of Sciences in Moscow, was kept under such wraps, as US-Russian non-proliferation efforts are usually the stuff of big press in Russia.

The conference dealt with several accidents in dismantling RTGs—the most recent of which occurred in Northeast Russia where the DOE is concentrating its funding. The incident, which occurred in September, was only recently made public by Russian nuclear authorities. The conference also publicised the unacceptably high incidence of theft of precious metals and vandalism of RTGs, leading to the abandonment of the highly active nuclear sources that power them.

Furthermore, the conference raised the question about how strictly governmental regulations on removing RTGs are being observed, especially now that foreign money is funding much of the activity. It also posed hard questions to donor governments—especially the US government—about how well their money was being handled, even though no ties have been established foreign funding and mishandled RTG dismantlement procedures.

In mid-February, a similar seminar on RTGs decommissioning was held in Oslo, organized by the Contact Expert Group of the International Atomic Energy Agency. At this conference—which was similarly closed—Deputy Head of Russias Federal Agency for Atomic Energy (Rosatom) Sergei Antipov announced that Russia, with long-standing help from Norway, and new-found support from the United States, has decommissioned some 200 of 920 operable RTGs, according to Rosatoms official web site. More than a hundred of those are simply unaccounted for.

By Russian nuclear regulatory accounts, the bulk of these devices, located along Russias Arctic and Pacific coasts, have not been visited by the relevant maintenance authorities for years. Most of these batteries by admission of Russian nuclear officials, are untended, falling apart and have long surpassed their engineered life-spans—a point underscored by Antipov in Oslo. Hardly any of the devices are protected by fences or even signs indicating radiation hazards. Meanwhile, as evidenced by two incidents in Norwest Russia in 2003, the unguarded devices are pillaged by metal scavengers for the valuable metals used to protect the radioactive batteries.

International help
In Oslo, Antipov stumped for a united structure and system in Russia that would coordinate the decommissioning of RTGs—something akin to Rosatoms Master Plan for nuclear clean-up in Russias Northwest. Antipov said that different organisations from different countries try to make contact with Russian authorities to help in the RTG dismantlement effort, but have no idea where to start, causing confusion and delays.

Rosatom, Antipov said in Oslo, was now working on the blueprints for such a structure, but insisted that all activities must be overseen by Rosatom.

In addition to the DalRAO site, Rosatom officials insisted in Oslo that RTG dismantlement sites be created in the Far East to avoid the financial and proliferation strain of bringing the to Moscow for dismantlement at the Institute for Technological Physics and Automatisation, and the further shipment of their strontium cores to Russias Mayak facility in the southern Urals.

According to Antipov when he spoke in Oslo, the DOE promised to examine the possibility of funding the construction building a special dismantlement chamber at the DalRAO site.

Norway will clean up more RTGs
At the Russian-Norwegian meeting, Russian and Norway signed an agreement to dismantle the remaining 110 nuclear powered lighthouses in the Murmansk and Arkangelsk regions of Russia by 2009—with the total elimination of all Russian RTGs by 2012—replacing them with renewable energy sources, and to transport the radioactive waste to Mayak. At an estimated $30,000 to $35,000 per RTG unit dismantled, the effort can be estimated to carry a price tag of more than $3.5m, though no official figures have been released. 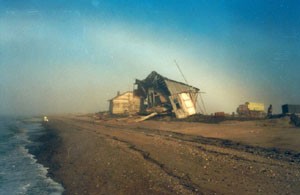 FSETANs position
"The Hydrographic Facility needed to produce technical documentation including proof of secure transportation and how it would be realized," said Lukovnikov in an interview with Bellona Web. Only the first phase, initial site investigation, had been approved.

Lukovnikov added that skirting these demands led to the inadequate transportation of RTGs and the accident. There were no transport containers. Transport took place violating norms and rules.

Several other RTGs have already been removed this year, but under the conditions spelled out by FSETANs regulations.

Hydrographic Facility Director Victor Medvedev had scant comment on the incident when Bellona Web finally reached him after two weeks of phone calls.

I have no comment, he said, but then went on to add impatiently that he didnt understand, why any article should written about the fallen RTGs or about the Arbitration court. All of that has nothing to do with the environment. A lot of people are calling me.

He then demanded, in violation of Russian mass-media legislation, that Bellona web show him its article, after which he would decide whether its worth commenting on.

Russian journalists are guarded from having to demonstrate need for requested commentary by article 39 of Russias law on mass media.

So how well is the Hydrographic Facility Handling its responsibilities?
The Hydrographic Facilitys deputy director, Yevgeny Klyuev, was equally reluctant to speak on the issue, initially referred all questions back to Medvedev. But he did point out that the facility safely removed 15 RTGs from the Yakutiya region in far Northeastern Siberia in the Summer 2004 and transported them to Atomflot in Murmansk. From there, they were taken to Moscow for salvage by the Federal Science Research Institute of Technical Physics and Automatisation.

For the whole of last year, Klyuev said that sixty nine RTGs were removed from various municipalities throughout Russia for salvage and dismantling. Plans are underway to salvage another 50 RTGs in 2005.

Another source within FSETAN, who asked that his name not be used, supported the Hydrographic Facilitys position and cited lack of funding as the principle cause of the September mishap. Overall, the source said, the Hydrographic Facility, despite its unfamiliar mandate within the government, has a good record with decommissioning RTGs for last year.