Bellona conference on Lepse pits skepticism against optimism in Europe 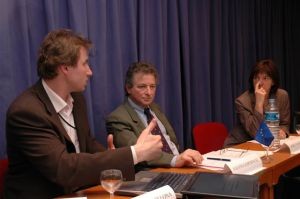 The Lepse and its safe dismantlement have been a headache for European nations since 1994 when they stepped in with offers of financial and technical assistance.
The vessels hull is currently laden with some 639 spent nuclear fuel assemblies, many of them so damaged they cannot be removed by conventional means and will require special robotic technologies depending on what decommissioning plan is agreed on.

According to Russian authorities, the total cost for dismantling the ship by the target year of 2008 is $30.7m plus an addition $3.3m in development and technical planning. There are, at current, EUR 12,028,000 to be put toward the project.

It was not until the May 2003 signing of the Multi-lateral Nuclear Environmental Programme in the Russian Federation, and the subsequent build-up and release of funding held by the European Bank of Reconstruction and Development (EBRD) in the Northern Dimension Environmental Partnership (NDEP) fund that any real progress could begin on any substantive European-Russian bilateral nuclear clean-up projects. Funding floodgates also opened from G-8 nations, which promised Russia $20 billion over 10 years toward nuclear remediation.

But the general consensus among those leaders who attended EU funds for nuclear clean-up in Northwestern Russia: Money put to good use? held Tuesday by the Bellona Foundation at its Brussels office, was that the Russian side is still hedging on information that is crucial for donor nations to move forward in their efforts to assist in the Lepses dismantlement. In this information brown-out, those nations who can now contribute are reluctant to do so.

The conference was a good, small step forward, but no big decisions are likely to be made until the CEG meeting in Murmansk, said Bellonas Nils Bøhmer, referring to the planned May 24th gathering of the Contact Expert Group of the International Atomic Energy Agency (IAEA) in Murmansk. Tuesdays conference was attended by some 20 EU Parliament and Commission representatives, NGO heads and European nuclear officials.

Small amounts of money have been spent on the Lepse project, but not much, Bøhmer said, adding that many of the powers governing the expenditures need a better plan for the Lepse from the Russian side than what they have seen so far.

Russia develops a Master Plan
For their part, the Russians adopted a so-called Master Plan to dismantle aging nuclear submarines and clean-up nuclear facilities in North West Russia that was approved at the NDEP donors meeting held in London in December. The plans main features include prioritising those radioactive dangers that need to be tackled first. It is as yet unclear where the Lepse falls in that list of priorities.

Many members of European Commission (EC) who attended Tuesdays conference remain unimpressed by the Russia Master Plans apparent attempt at openness. Italian EC member Fausto Gasperini, in particular, noted that Europe has been trying for 10 years to secure access to information on the Lepse.

In that sense the Russian Master Plan, with its promises of greater transparency and inspection rights for donor nations funding nuclear remediation projects in Russia should come as a consolation. But Gasperini soft-pedaled hopes he might have about the Master Plan opening previously locked doors. He could not be reached for further comment on Tuesday.

The Parliament is more active in this programme than the EC, which has a lukewarm attitude toward the project, he said. But the Parliament can put pressure on the Commission, so the Commission will wait to see what Parliaments approach will be before taking more decisive steps. 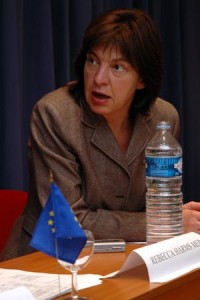 Public hearings
The new Russian Master Plan for dismantling aged submarines and cleaning up long dilapidated and contaminated nuclear installations like the Lepse will, as promised by the Russian side, be sent for public approval in those areas in Northwest Russia that will be most effected by the projects.

Sergei Zhavoronkin of Bellonas office in Murmansk—around which the bulk of the Master Plans activities will be implemented—will be improving on these efforts by setting by making information more publicly avaiable.

We want to inform the public about the situation in the area, he said at the conference.

But the problem is a continual lack of transparency from Russian nuclear officials.

The Russian Federal Agency for Atomic Energy (Rosatom) has a long history of holding its cards close to its chest, which it justifies by not wanting to panic the public, who in Rosatoms view, has little to no grasp of radiation dangers and thus assume the worst in the wake of Chernobyl.

But Zhavoronkin pointed out several examples where official silence caused havoc rather than quelled public hysteria. In November, a purported radiation leak at the Balakovo nuclear power plant in Russia Saratov region that Russian authorities refused to clarify caused a run on drugstores as people, acting on unofficial information, cleared the shelves of iodine solution in hopes of avoiding radiation sickness. Whatever sparse official information that was available was contradictory and vague.

Emergency rooms subsequently filled with people who had overdosed on iodine or were in just in search of general information. When Rosatom finally broke its silence days later, the population remained skeptical of the all-clear signal, thus underscoring the need for transparent, accessible and neutral nuclear regulatory structure in Russia that would offer clear and timely instruction during such incidents.

Zhavoronkin, in agreement with Bellona-wide policy, stumped for a totally independent nuclear oversight body in Russia that has nothing to do with the Federal Service for Energy, Technology and Atomic Oversight (FSETAN in its Russian abbreviation) which replaced Gozatomnadzor, Russias former nuclear regulator, in an August government shake up.

Bellonas view of the Russian Master Plan
Though The Bellona Foundation also endorses a wait and see approach to Russias NDEP-approved Master Plan, it also supports Russian authorities who developed the plan. In itself, the plan is the theoretical cornerstone that will ensure NDEP donor nations that their money is being spent wisely through audits, site access, environmental impact studies carried out before projects begin, and a host of other transparency measures. Bellona hopes that the theory will become reality.

Speaking in Brussels, Zhavoronkin called for a plan that would gauge the success of the Master Plan in Northwest Russia and then introduce it, if it achieves the desired results, more broadly across Russia on a region by region basis.