The Russian government, in cooperation with the European Bank of Reconstruction and Development (EBRD), has publicly released an 80-page executive summary of what the institutions call phase one of an overall Strategic Master Plan to decommission and dismantle retired nuclear submarines and other nuclear Russian naval vessels that have been taken out of service in Northwest Russia. The plan will also remediate or rehabilitate numerous aging storage facilities for radioactive waste.

Published on February 11, 2005 by Charles Digges 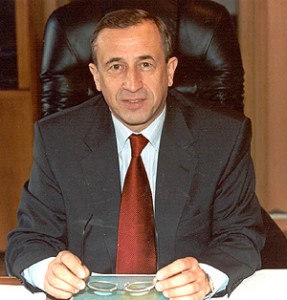 The release of the executive summary represents a major breakthrough in European and Russian cooperation in submarine dismantlement, which codifies Northwest Russias most pressing decommissioning priorities, resource management, public consultation and environmental rehabilitation, and will hopefully reduce friction in cooperative submarine destruction and remediation projects between Russia and European sponsors.

At present, some 71 decommissioned Northern Fleet nuclear submarines  some with their nuclear fuel still on board, await full dismantlement.

The Master Plan was approved on December 6th 2004 in London during a meeting with Russia and European sponsors of the EBRBs Northern Dimensions Enviromental Programmes Nuclear Window fund (NDEP).

The most important objective of phase one of the Master Plan, wrote, the projects Scientific Supervisor Ashot Sarkisov, is to justify high priority tasks which should be solved immediately. Implementing the six interrelated tasks, he wrote, will in fact facilitate eliminating the real and potential sources of environmental hazard associated with the decommissioning objects.

The Master Plan executive summary and forthcoming technical volume were complete by three Russian institutions: the Russian Academy of Sciences IBRAE Nuclear Safety Institute, the Dollezhal Scientific Research and Design Institute of Energy Technologies (NIKIET in its Russian acronym), and the Kurchatov Institute. This makes the plan an almost entirely Russian-conceived project.

The executive summary, however, is a final draft, said Vince Novak of the EBRDs Nuclear Security Department in an interview with Bellona Web this week.

What phase one of the Master Plan includes
According to Sarkisov, developing the several hundred page document that constitutes phase one of the Master Plan encompassed six inter-related tasks, The first task was to carry out and analyze of the broad legal and regulatory basis which stipulates legal and technical requirements for organising the work of on [nuclear submarines] decommissioning. According to the analysis conducted, Sarkisov wrote, the legal and regulatory basis of the Russian Federation corresponded to commonly recognised approaches to nuclear, radiation and ecological safety and SNF (spent nuclear fuel) and RW (radioactive waste).

The second and third tasks for the development of the Master Plan were minutely detailed collection, systemtisation, updating and analysis of all information on those items slated for decommissioning and environmental rehabilitation. This included gathering data on all SNF and RW accrued in various storage sites, analyzing the sites capabilities and features and those of related enterprises, and pouring over information regarding the physical protection of and environmental monitoring systems in place at these sites.

The information an analytical materials presented in the report are unique in terms of their topicality and level of detail, wrote Sarkisov on this phase of the Master Plans development.

The fourth task was to thoroughly consider hazards posed by decommissioned nuclear submarines. This phase analyzed the decommissioned submarine complex both as a whole and on the basis of individual vessels, taking into account their age and state of dilapidation The results obtained by this study became the cornerstone for justifying a priority ranking system which will flag for priority dismantlement those vessels in the worst shape.

The third and fourth tasks, wrote Sarkisov, logically gave rise to the fifth task which was to analyze where bottlenecks in the dismantlement operation under the Master Plan could occur on a vessel by vessel basis. Each vessel, said Sarkisov, will present its own set of technological dismantlement difficulties and the study considered over 100 measures and streamlined them to a more limited list to yield the most effective measures.

The sixth task, identified by Sarkisov as being the most important, was developing the a priority justification methodology for which dismantlement projects to tackle first. This methodology, he wrote, was created with the help of a broad spectrum of experts from different scientific, operating and industrial fields. 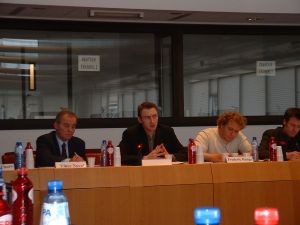 Public consultations
At this point in time, the executive summary is what we have for the public in order to spell out the goals of the Master Plan, said Novak in a telephone interview with Bellona Web. He said that a condensed version of the executive summary would be drafted for the public consultation portion of the implementation of the Master plan, making it a less cumbersome read for citizens of areas where Master Plan work will be carried out.

The EBRD holds the NDEP Nuclear Window fund. This money, the uses of which are dictated by a group of mostly European nations, has ballooned to some EUR180 since 2003, and the EBRD has been instrumental in working with the Russians to develop the Master Plan so the cash crop can be harvested most effectively.

Novak was especially pleased that the Russians had included the public consultation portion in the Master Plans implementation. Indeed, Russia has, in the past, been reluctant to share information on projects with nuclear remediation project sponsors—as can be seen in numerous examples within Cooperative Threat Reduction (CTR) programme run by the US Department of Defence. Novak singled out Sergei Antipov, deputy chief of the Russian Agency for Atomic Energy (Rosatom)—the successor organisation to the closed-mouthed Ministry of Atomic Energy—for making this culture of reportedly growing openness possible.

Novak, as well as other European officials who spoke with Bellona Web, indicated cautiously that this openness is a breath of fresh air cultivated by Antipov within the new Rosatom structure, whose mandate is as yet not completely clear, but will nonetheless be the lynchpin for Russian implementation of the Master Plan. One official notes, The Russians can close up as easily as they can open up, so we hope the situation will stay as it is. For now they are cooperating and that makes our work easier.

Novak said that in the creation of the Master Plan, we have managed to overcome sensitivities and confidentialities—after all, you cannot have a confidential programme for nuclear dismantlement.

The public consultations, according to documents obtained by Bellona Web, are being handled by the British-Canadian consulting firm NNC, and have been divided into five stages. According to the NNC document, prepared for the EBRD and entitled Public Consultation Plan for Strategic Environmental Assessment-Northern Dimensions Environmental Project (NDEP),these stages will be completed along the following time-table:

In an earlier interview on the Rosatom-sponsored Nuclear.ru news site, Antipov was also pleased by the reception the Russian-developed Master Plan received at the December 6th NDEP donors meeting in London, where according to many who were present, the plan got overwhelming support.

The donors assembly looked over and approved the Master Plan. And this is the most important result because there are no longer any barriers from the NDEP funds side to release expenditures in Russias direction.

He said that eight priority task had been identified by the Russians right away and that work will begin as soon as a coordinating structure within NDEP is in place—when the Master Plans second phase is approved. As yet, there is no deadline fixed for completion of the Master Plans second phase, but according to Antipov and Sarkisov, it is already deep into the draft stage.

The eight projects identified by Antipov will deal with ensuring greater physical security at nuclear sites in Northwest Russia, engineering surveys of Gremikha Bay and Andreyeva Bay, two infamously contaminated sites on the Kola Peninsula storing naval radioactive waste—in some cases in the open—and organisation of radiation monitoring of sites where dismantlement work will be taking place.

Antipov slightly misspoke in his Nuclear.ru interview, saying that the public consultations had been concluded and approved by the Assembly of Donors, and adding that the principle result of the public consultations is that, on the whole, no one, including such well known environmental groups as Bellona and Greenpeace, has any objections to the Master Plan.

It is true that Bellona has approved the idea of creating a Master Plan, but it has not been approached for the notification stage of the NNC public consultation.

Novak, who was present at the December 6th Donors Assembly meeting, explained, however, that Antipov was referring to the scoping portion of the public consultation. Other European officials present for the meeting corroborated this interpretation of Antipovs presentation.

Antipov himself, despite several attempts, could not be reached for further comment.

Antipov and Novak emphasised in their separate interviews that this is just the completion of phase one of the Master Plan. Phase two, which according to Sarkisov, Novak, Antipov and others, will concentrate on developing time tables for work, outline specific projects, and organise the work in such a way as to avoid overlaps and bottlenecks.

Novak added that the development of phase two should also seek an agreement among donor nations on the creation of a management team for the program that would, in Novaks conception, be comprised of a group of Rosatom experts with the EBRD in a consultative role. This would seem to echo Antipovs version of how phase two should be developed in terms of a plan of programme action.

Setting the priorities—Andreyeva Bay
Among these top priorites, said Novak, is likely to be Andreyeva bay, located 55 kilometres from the Russian-Nowegian border, which suffered an accident in one of its pool storage facilities in 1982, during which some 3,000 cubic meters of radioactive cooling water leaked out.

The fuel stored in that pool, located in Andreyeva Bays infamous building No. 5, was transferred to dry storage in three concrete tanks, which are now 100 percent full. But many of Andreyeva Bays 21,640 spent nuclear fuel assemblies—which contain 35 tonnes of fuel materials with a total radioactivity of 26.8 million curies—have been damaged, making them much more difficult to extract from their holding cylinders and transfer to better storage facilities.

Efforts to deal with the radiological hazards at Anreyeva Bay have been thwarted time and again by Russian authorities who have refused access to potential donor bodies and have held information about the site close to their chests. This has only served to add to the perception of secrecy surrounding the Russian nuclear industry, and what many countries regard as the Kremlins spy mania and paranoia surrounding its ailing nuclear infrastructure.

But in Novaks assesment, at least on the point of Andreyeva Bay, the Russian are only slightly clearer about the hazards contained at there than are those countries who wish to help.

I believe the Russians indeed do not know enough about Andreyeva, neither the quantity or condition of the fuel stored there, said Novak. They just dont have the information.