Russian nuclear oversight officials consider technologies for decommissioning and dismantling the notorious Lepse radioactive waste storage ship that have earlier been suggested on Bellona Web to be “preferable” to other possible solutions under consideration. Bellona calls for a transparent environmental evaluation of dismantlement projects for the Lepse.

One of the most radioactively dangerous ship in the whole of Northern Europe, the Lepse stores in its hold tonnes of spent nuclear fuel, or SNFmuch of it damaged and therefore extremely dangerous to movefrom Russias civilian fleet of nuclear icebreakers.

The ship was used actively from 1963 until 1981 as a fuel storage and reactor reloading vessel for the icebreaker fleet run by the Murmansk Shipping Company, or MSCo, and serviced the Lenin, Sibir and Arktika icebreakers. After the commissioning of a similar ship called the Imandra, the Lepse became a permanent SNF storage ship. It is currently moored at the docks of Atomflot, the service base for the MSCos nuclear icebreakers, located 2 kilometers north of the densely populated Arctic city of Murmansk.

The Chernogorov report
In June, Bellona published in Russian a report, written by Yuri Chernogorov, who was the chief of the Special Technical Supervision group at MSCo from 1980 to 1991, and dealt with the decommissioning of Lepse.

It was Chernogorovs assertion in hiss report that, in order to secure the Lepse from posing further radioactive hazards to the Murmansk region, it should simply be filled with a special radiation resistant concrete mixture, leaving the SNF onboard in storage.

The concrete block that would then comprise the SNF storage section of the Lespe would then be cut from her hull. Then, because of the specially designed radiation containing cement, the hull could be stored in the open for 500 years, or at least until a suitable underground nuclear waste repository is constructed, Chernogorovs plan asserts. In dry storage, says Chernogorov, this special concrete mixture will remain stable for thousands of years.

Other variants that have been considered include unloading spent nuclear fuel from the Lepse and sending it to dry storage. But this would be extremely hazardous for the personnel involved because of both the fragile condition of damaged fuel on board and the high radiation levels measured at the Lepse. According to Chernogorov, the Lepses SNF storage hold reached 20 sieverts per hour. A dose of one sievert is enough to cause radiation sickness. The absolute maximum permissible dosage per nuclear worker in Russia has been established to be 0.05 sieverts.

The suggested variant of Lepse decommissioning without unloading of SNF beyond the bounds of the Atomflot docks and Murmansk is in our opinion more preferable, reads the conclusion compiled by the Northern European Inter-regional Department of the Federal Service for Nuclear Oversightor FSAN in its Russian abbreviationin reference to the Chernogorov report published by Bellona Web.

One of the problems possible is the lack of personnel to carry out the direct works, continued FSANs document. Having soon received the annual radiation dosage norm, they would not only be prevented from continuing to unload SNF, but would also be unable to fulfill any of their service duties for maintaining the nuclear fleet. 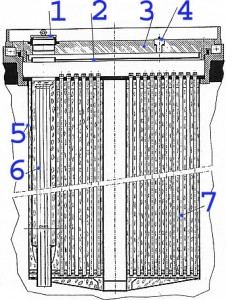 Concrete mixture
The technology of securing Lepse storage without unloading the SNF is comprised of creating additional biological immobilizing engineering barriers. The concrete mixture was invented and developed by a group specialists with Chernogorovs participation during the years between 1993 and 1999.

After pouring the radiation-resistant concrete mixture into the caissons and between the channels, and then the blocking the SNF storage unit, a neighbouring tank full of low-activity waste would be cut out of the hull, Chernogorov said. In this manner, blocks of the hull, from side to side, would be put on special cartsthus eliminating the problem of the absence of powerful cranes in the vicinity of the Lepse.

Cherngorovs cement
Chernogorov realized that concrete was the key to solving the problem but that regular concrete would not do the job as it was not sufficiently porous, and thus had to be improved with sand and water. Gamma radiation causes radiolysis and water decomposes into gases. According to Avagadros law, 18 grams of water produce 22.4 litres of gas, Chernogorov said.

The secret lies in the shugite
The special concrete mixture, he advocates, is permeable for gas but not for water  because of the shungisite it contains.

Shungisite is a burnt form of shungitean elementary non-crystalline carbon with a meta-stable structure incapable of graphitizationwhich is abundant in rocks of the Karelia region of Russia, south of Murmansk. In Chernogorovs mixture, shungisite is used instead of quartz.

Also boron carbide is distributed equally in the mixture. This carbide is a neutron absorber and would render impossible both a self-sustaining chain reaction and leakage of radio-nuclides into the environment. The mixture had been tested for absorbed dose of 6000 Mrad if gamma irradiation is 110-86 rad/sec. Such a material could prove extraordinarily beneficial for nuclear storage facilities dealing with radioactive waste and SNF.

Paldiski
Pouring concrete into the Lepse would be similar to another operation Chernogorov performed to decommission the radioactive heritage of the Soviet Union.

In 1994, Lennart Meri, president of the former Soviet Rebulic of Estonia met Russian president Boris Yeltsin in Moscow and they agreed to secure Soviet nuclear reactor submarine compartments in the former 93rd training unit of the Soviet Navy in the Estonian town of Paldiski, 50 kilometers west of Tallinn. Chernogorov, as the leading engineer in this field, participated in developing the technology for the decommissioning operation.

This mixture and the technology of its usage were worked out based on the experience we gained in 1991 during concrete grouting in the spaces between the tanks of the Lepse. A similar mixture was used in Paldiski, Chernogorov said.

The other variant was using not the concrete mixture, but a mixture based on furfural, said Chernogorov. Thats what NIKIET Institute of Minatom proposed, but furfural is a paralyzing poison, and its application is dangerous for healthat furfural producing plants workers usually faint away at the end of their shift. Moreover, furfural mixture would be almost one hundred times more expensive.

When the operation was finished in September 1995, Estonian President Meri, standing without remarks on the concrete sarcophagus over one of the reactors, confirmed, more articulately than words could have, that the operation had been a success.

In my opinion, the question of Lepse decommissioning requires a wide discussion with participation of environmentalists, physicists, specialists on radiation safety, officials from the Murmansk administration and Minatom, Chernogorov said.

And I hope we wont leave this problem to our grand-children.