This film created by Bellona-Murmansk tells about the most dangerous ship in the Northern Europe called Lepse. The ship, which stores onboard tones of spent nuclear fuel, has become a grave illustration of the problems haunting the Russian nuclear fleet and the international efforts aimed at solving those problems. 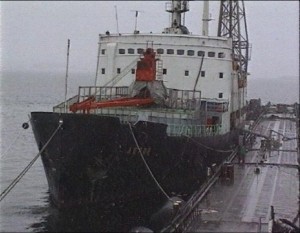 Voice-over: – Nuclear fleet of the former Soviet Union greatly outnumbered nuclear fleets of other European countries and the USA. Five nuclear powered surface ships, about 250 nuclear powered submarines, one container ship and seven nuclear powered icebreakers were built in Russia from 1955 to 2000. The fleet is gradually getting old and creates a danger of radioactive accidents and environmental disasters. More than 180 nuclear powered ships are now out of operation, but there is still lack of resources and experience for their timely and safe dismantlement. Decommissioning of nuclear service ships is even more complicated matter.

Today Russia operates more than 90 nuclear service ships and barges, which transport and store spent nuclear fuel, liquid and solid radioactive waste. No country in the world needs such a numerous nuclear service ship fleet. Nuclear powered ships in other countries are served at specialised bases. The situation is different in Russia.

Then the workers will cut the ship into large blocks, put them in concrete and transport the blocks to the storage facility. They plan to implement all the operations within five years.

Other nuclear service ships with fewer problems than Lepse are the next to be decommissioned.
Nobody knows what to do with uranium-zirconium cladding fuel, which cannot be reprocessed. It is stored on service ship Lotta. Today Lotta and Imandra service ships store 14 reactor cores of uranium-zirconium fuel, which contain more than 3,000 assemblies. These two ships can store 22 reactor cores as maximum. Low tempo of spent nuclear fuel unloading from nuclear powered icebreakers and submarines, three-year period of its storage onboard service ships before it can be transported to Mayak can lead to a critical situation with the accumulation of spent nuclear fuel on these ships. But this is another story and we hope it will take less time than the still unfinished Lepse project.

Sergey Zhavoronkin:
It is a shame if Lepse will anyway exist as a ship, which scares Europe.

You can send your order for the film to russbell@polarcom.ru