Several radiation decontamination workers were irradiated high above normal levels earlier this month at the Gremikha Naval Base while working with solid radioactive waste in the form of equipment taken from nuclear submarine reactors, ministry officials confirmed in interviews with Bellona Web.

Published on September 24, 2003 by Rashid Alimov 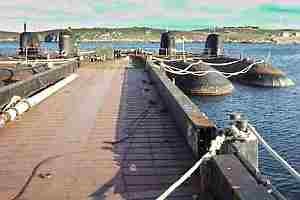 But information about what radiation doses the workers received, where they are located now, how sick they are, why they were not using proper anti-radiation precautionsand even when the incident occurredis contradictory and will apparently be cleared up by an investigation into the incident launched by a special commission formed by the Ministry of Atomic Energy, or Minatom.

Alexander Agapov, chief of Minatoms safety, ecology and emergency situations department confirmed information obtained by Bellona Web that 10 or more workers at Gremikhaa facility belonging to SevRAO, a Minatom waste management structure on the Kola Peninsula were irradiated in early September, and that their health status is not currently known.

But Minatom spokesman Nikolai Shingaryov said on Wednesday that 12 SevRAO workers were irradiated and received doses of 50 millisieverts, which is 30 millisieverts above the healthy norm, according to the state-run ITAR-TASS Russian newswire. He also said that the incident happened on August 20th.

Still later that same day, Shingaryov revised his statement in a Minatom press release, which said that the incident actually occurred on July 11th.

SevRAOs Structure
SevRAOor Northern Radioactive Wasteis a structure created by Minatom on the Kola Peninsula for building an infrastructure for decommissioning nuclear submarines, securing their radioactive waste and spent nuclear fuel, and the rehabilitation of dangerous nuclear equipment in the Northern region of Russia. Funding has been pledged for SevRAOs operation by a number of countries, including Norway, Sweden, Germany, France, the United States and the United Kingdom. In a gradual transition, radioactive waste sites in the Murmansk region that once fell under the auspices of the Ministry of Defence are being transferred to SevRAOs jurisdiction.

Sergei Zhavoronkin, head of Bellonas office in Murmansk, said dosages of 50 millisieverts are not deadly, but that the workers who received these dosages should no longer be allowed to work at the SevRAO facility. The annual norm for radiation exposure, said Zhavoronkin, is 20 millisievertsmeaning these workers received twice the yearly acceptable dosage in the short period of time while they were working with the radioactive materials.

It also remains unclear from Shingaryovs statements, said Zhavoronkin, whether the workers were bombarded by gamma radiation, or a combination of different kinds of radiation. It remains unknown, noted Zhavoronkin, whether the workers swallowed or ingested any of the radioactive material with which they were workingwhich would make their plight much more dangerous.

Zhavoronkin also stressed that healthcare for workers has suffered since Gremikha was transferred to SevRAO. At present, there are not even any healthcare workers with competence enough to determine what kind of radiation was involved in the incident.

Workers Health Status Unknown
Shingaryov said that, in 2000, before apparent normative changes were made, radiation doses reaching 50 millisieverts were considered normal, and that there was no danger to the workers health. He added that one of the irradiated workers is currently under observation at the Moscow Institute of Biophysics.

Still further information on the condition of the workers came from Yury Yevdokimov, governor of the Murmansk region, where Gremikha is located. Yevdokimov told Bellona Web in a Wednesday interview that only four workers were irradiated and they are all entirely healthy.

Agapovs account of the workers health is somewhat more vague.

Ive had a talk with the first deputy minister of atomic energy, Mikhail Solonin, and I have been given the task of securing the required information to find out about the clinical situation of the irradiated people, said Agapov.

Why special documentation would be required for Agapov, a highly ranked official, to learn of the workers conditions remains unknown. Agapov said that the workers could be suffering from skin burns due to local radiation exposure, and not necessarily whole body irradiation. But he was nonetheless unsure.

It is also unclear from differing accounts provided by Shingaryov and Agapov whether the workers were civilian technicians with SevRAO, or whether they were naval sailors. The Russian Northern Fleet Command said Wednesday that no naval personnel were involved.

Gremikhas Recent History of Disaster
Gremikha Bay has been in recent headlines as the point of origin of the K-159, a rusty barrel of a decommissioned November class submarine that sank on August 30th while being towed to the Northern Kola Peninsula for dismantlement. The incident killed nine of the 10 crew members aboard the K-159 and led to the suspension of Northern Fleet Chief, Admiral Gennady Suchkov.

According to Agapov, the radiation exposure incident at Gremikha occurred while staff, working without proper radiation protection, were handling solid high-level waste from submarine reactorsincluding safety rods, control rods, and other highly irradiated reactor elements. According to information obtained by Bellona Web, there was no spent nuclear fuel among the reactor parts being handled.

Agapov said that Minatom has already carried out an investigation of the incident, but was not satisfied with the results. He added, however, that the problem was connected with the organisation of the work.

Incident Underscores Radiation Dangers from Retired Nuclear Vessels
Alexander Nikitin, a former submarine captain first class and the chairman of Bellonas St. Petersburg office said in an interview with Bellona Web that this incident once again shows the serious danger presented by retired naval vessels. He said this danger is demonstrated by both nuclear subs, like K-159 that sank during transportation [], and onshore storage sites in Gremikha Bay, Andreyeva Bay and other bases of the Northern Fleet.

The Bellona Foundation has already made its position known regarding work carried out at these facilities that is financed by Western donors. In Bellonas opinion, these projects are important and laudable and need continued support. Nevertheless, Bellona asserts that many of them are carried out without proper risk assessment, and donated money often helps finance dangerous dismantlement practices.

In our opinion, there are problems here. Not the last reason for that being that its not clear who controls radiation safety on these sites like Gremikha or Andreyeva Bay, said Nikitin.

As of 1999, when Russian President Vladimir Putin signed a governmental decree stripping Gosatomnadzor, or GAN, Russias nuclear regulatory agency, of the jurisdiction to oversee submarine decommissioning, the responsibility was passed to the Defence Ministrys radiation safety unit and Minatom, meaning that, within SevRAO, Minatom is its own nuclear regulatory body. But the Defence Ministry and Minatom have often seemed more interested in guarding their secrets about radiation hazards than addressing the harm these hazards cause.

Disturbingly, Murmansk Regional Governor Yevdokimovwho has signed agreements for international assistance with Norway and Swedenwas unaware in an interview with Bellona Web that GAN has no regulatory oversight of SevRAO. When confronted with this information, he was nonplussed.

GAN has no regulatory control? That cannot be, he said. Decommissioning is passed from military jurisdiction to Minatom, and GAN controls the process. A GAN spokeswoman denied that her agency had any jurisdiction over military nuclear installations or SevRAO.

Bellona Hopes Minatom Will Objectively Investigate Incident
We hope that after Minatoms commission has completed its work, we will receive objective information, said Nikitin. He noted that Article 7 of the law On State Secrets provides that any information pertaining to civil emergencies and catastrophes that threaten the safety and health of the population; to natural disasters and official forecasts about disasters and their potential consequences, as well as information about ecological conditions cannot be classified.

There are no roads or railways to the Gremikha base and it can only be reached by air or sea. In 2001, the base was transferred from the Russian Navys jurisdiction over to Minatoms SevRAO. At present, there are still up to five submarinesas opposed to 19 at the beginning of 2002laid up at Gremikhas piers and buoys, still loaded with their spent nuclear fuel as they await dismantlement.