Nuclear lighthouses to be replaced

The USA will give Russia aid to replace its nuclear lighthouses — many located along the coast of the Kola Peninsula and other places in the Arctic. But the Russian authorities cannot say precisely where all of them are located. Nuclear-powered lighthouses can lead to environmental contamination and represent a serious proliferation threat if diverted to terrorists.

Published on February 2, 2003 by Thomas Nilsen 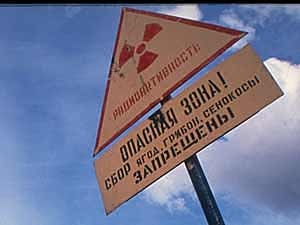 Exactly ten years ago Bellona reported the whereabouts of 132 nuclear-powered lighthouses situated along the north coast in Russia. The closest one was just a few dozen meters from the Norwegian border. Since 1993 Bellona has warned of the possible radioactive leaks into the environment and the threat of theft of the radioactive strontium-90 in the unguarded and distantly situated lighthouses.

The lighthouses are located in the area without available electricity sources. They are powered by so-called radio thermoelectric generators, or RTGs, in which the strong strontium source of energy produces heat to power a generator. The generator finally produces electricity to power the lamp in the lighthouse.

Strontium-90 is a waste product generated in a nuclear reactor. The USSR had access to this product thanks to the large reprocessing facilities in Siberia. Similar power sources were used in distant radars, weather stations and satellites since the mid-1960s.

According to the dismissed environmental committee, Russia possessed 500 operative RTG.

Leaks and theft
Strontium-90 has half-live decay period of 30 years, so the lighthouses can operate without any inspection for many years. Bellona considers the lighthouses to be a threat to the environment’s safety. It can take many years before any theft or radioactive leak is noticed, as the lighthouses are not inspected.

Such lighthouses are situated along the coast of the Kola Peninsula, around the White Sea and on Novaya Zemlya. An unknown number of lighthouses are located in Baltic Sea, along the northern sea route in Siberia and around Kamchatka in the Russian Far East.

In summer 2001 two people received radioactive doses after the attempt to dismantle the lighthouse near Kandalaksha in Murmansk region. They tried to extract the lead from the lighthouse in order to sell it later as scrap metal. They were not aware of the fact that there was a strong radiation source inside the lighthouse.

Lack of information
Last summer the Russian Nuclear Regulatory specialists inspected the lighthouses in Siberia. Inspection revealed terrible facts: most of them were described as in very bad condition. The radiation levels near the lighthouses exceeded the permitted level, which indicates the possibility of radioactive leakage.

But the scariest thing was that the inspectors have not found all the lighthouses they were looking for. There is a slim chance they were stolen and a big chance that the Russian authorities simply lack the full overview of the lighthouses’ locations.

At the same time representatives of the International Atomic Energy Agency, or IAEA, were desperately looking for RTG in the mountains north in the former Russian republic of Georgia. The IAEA was afraid the Chechen rebels would use the radioactive source to build a radiological dispersal device, or RDD, such as a “dirty bomb”. The Chechen rebels use the area near the Georgian—Russian border for training and hiding.

The American authorities believe terrorists connected with al-Quaida where previously hiding in Georgia.

When used with conventional explosives strontium-90 would cause more serious long-term damage than any ordinary bomb. The blast region would be contaminated with radiation and the population’s health will be affected for many years.

The CIA has stated that they found manuals describing the manufacture of RDDs in the al-Quaida caves in Afghanistan. 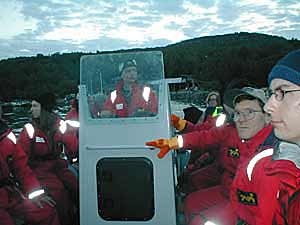 Solar batteries in the darkness
It is quite possible to change the radioactive energy source with other sources for a small price. There are lighthouses along the Norwegian northern coast that are powered with solar batteries. Even during the dark winters they function well due to a good battery capacity.

The authorities of Finnmark county in co-operation with the Russian Northern Fleet changed the energy source in the five lighthouses near the Norwegian border with a solar panel source.

Bellonas influence
Last August Bellona together with other representatives and experts of the US Congress examined solar-powered lighthouse in Norway near the Russian border. Bellona raised concerns before over the need to change nuclear-powered lighthouses in Russia.

In mid-January this year another American delegation visited northern Norway where they inspected the solar-powered lighthouse on Reinoya Island outside Kirkenes.

The fear of nuclear terror still haunts the USA, especially after September 11 2001. Since then Americans have expressed a strong wish to assist Russia in securing its nuclear materials. Senator Richard Lugar informed Bellona in his message that he supported the initiative to allocate a part of $400m—designated for securing weapons of mass destruction in Russia—to change the power source on the nuclear-powered lighthouses. 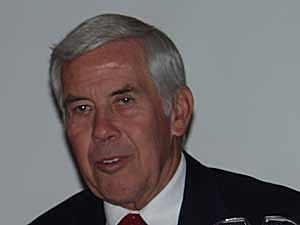 — These RTGs are considered to be very dangerous because they hold nuclear material that might be used in a radiological weapon, or “dirty bomb”. The Russian government does not have an accurate account of where all the generators are located. “We must find these units, secure them and remove the dangerous materials”, Lugar (R-IN) said.

Since the break-up of the Soviet Union Senator Lugar has been a key figure in the US regarding dismantling the nuclear weapons and nuclear-powered submarines. At present he is a leader of the Foreign Relations Committee in the Senate.

The funding will be distributed to the MPC&A programmes to prevent nuclear smuggling and the harvesting of orphaned radiation sources for use in “dirty bombs” by terrorists. Approximately $19.7m will be spent to secure radioactive batteries and other radiation sources that could be used in RDDs.

In addition to the American assistance to change the energy sources in the lighthouses Norway will provide funding for the most important step: to help Russia to establish a system for the safe transport and reception of the old radioactive sources. Such a facility should be built at the Mayak plant at the South Urals.