In the wake of the hostage drama in Moscow, the Russian government intends to spend more on the anti-terrorism campaign and scrap funds for federal nuclear safety programmes. 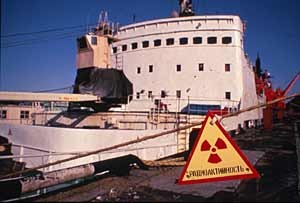 The Federation Council, the upper chamber of the Russian parliament, drafted a 7bn rouble bill — equivalent to $233m — for additional funding of the Russian security forces. The amount was later reduced to just over 3bn roubles by the Russian cabinet. Other budget items, such as security at strategic sites, will be increased, contributing to the overall rise in security funds.

But the increase will cut other spending; among these are funds earlier agreed for nuclear safety projects in the Russian Federation.

One of the projects to have its funding slashed is Lepse — a storage ship filled with damaged spent nuclear fuel assemblies moored outside Murmansk at the Kola Peninsula.

The Lepse project
The Lepse project has been dragging since 1994, when Bellona in co-operation with Murmansk Shipping Company, or MSCo, — the commercial operator of Russia’s nuclear-powered icebreaker fleet — facilitated the EU Commissioner’s visit to Murmansk, which brought the first international funding to the project.

Lepse has onboard 639 spent nuclear fuel assemblies, which have been stored there for 20 to 37 years. The conditions onboard are considered to be a health hazard for the personnel. This prompted Bellona to finance onshore cabins for the dilapidated ship’s crew to reduce risks to their health. Even though Lepse is being constantly monitored, it has an aged hull and is located in the Kola Fjord area, a region of heavy shipping, which presents a risk to the environment in case of accident.

The urgency of Lepse’s remediation has been recognised by international experts and governments. But only this year the final framework agreement was signed to release funds and to start working on the ship. Two years will be spent on paper work — preparation of the project on how to unload damaged fuel assemblies from the ship’s hold with the use of robotics. This work and the eventual unloading operation will be funded by western donors, including the EU and Norway.

But there are other expenses to take care of, such as keeping the ship afloat. This year, MSCo received 50m roubles to maintain the ship from the federal budget. A larger sum was in the federal budget for the year 2003, but now the chances of getting the funding are slim, the money will be transferred to the security forces, Bellona’s sources at MSCo say.

In the long run, the Russian side is also to foot the bill for managing the fuel after it is extracted from Lepse and put onshore, as well as decommissioning the ship. There are other sources to possible funding, but these depend on the signing of the Multilateral Nuclear Environmental Programme for the Russian Federation (MNEPR).

MNEPR to be discussed at Putin’s visit to Oslo
MNEPR was to become a universal agreement between Russia and other states wising to contribute to nuclear safety projects in north-west Russia. The agreement was to regulate tax exemption, nuclear liability and other issues in international nuclear safety projects. Despite the good idea supporting the agreement, negotiations between Russia and potential donor states have been carried out for years without result.

The last issues remaining to be discussed relate to value-added taxes. As soon as this problem is resolved, the first part of the 62m euro-fund pledged by the European countries can be spent on projects in north-west Russia.

MNEPR, according to Russia’s Foreign Ministry, is on the agenda when Russia’s President Vladimir Putin arrives in Oslo for the one-day visit on November 12th.

But signing MNEPR may not be enough for the eventual release of the funds. Russia has to be also one of the contributors and allocate 10m euros of the 62m fund. So far, Russia has only pledged to do so, without giving a final confirmation. Such a confirmation may be complicated, considering the new spending earmarked for the security forces included in Russia’s 2003 budget.

Other nuclear programmes are in danger
The discussion of the 2003 budget is still pending in the Russian State Duma, but the initial reactions indicate that there will be no major opposition to cuts in nuclear safety. So far, there have been no reports on other specific nuclear safety projects to be buried in 2003, but those are usually the first candidates to be deleted as the past 10-year experience shows.

At the same time the Russian Ministry for Nuclear Energy, or Minatom, which has responsibility for managing radioactive waste, is prioritising commercial projects, or so it thinks, such as building new nuclear power plants and developing nuclear fuel cycle infrastructure; including the grand plan to import foreign spent nuclear fuel to the Russian Federation for storage and eventual reprocessing. What it hopes for is unclear. Miantaom’s development of projects and obtaining international funding for them has been slow and some times such projects were simply stalled.