On a trip organised by Bellona and the Russian Duma, members of the European Parliament visited Kola’s nuclear sites and pledged support to fill the gaps in the existing programmes. 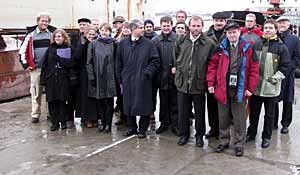 While the Nobel Peace Prize favourites, senators Nunn and Lugar, fight in the US Congress for the very existence of the Co-operative Threat Reduction programme, we register an increased European interest in the issue. Last week, Bellona and a member of the Russian State Duma, Valentin Luntsevich, took a group of ten members of the European Parliament to Murmansk to study nuclear safety and security issues, which have been haunting the region since the late 1980s. A more active and structured participation from the European countries regarding nuclear safety in north-west Russia is becoming vital. Moreover, politicians may have to compromise on their misunderstandings, which up to now have obstructed the successful implementation of the existing programmes.

The Kola region, of which Murmansk is the capital, in north-west Russia, hosts Russia’s once mighty Northern Fleet, which operated two-thirds of the 250 nuclear powered submarines built in the Soviet Union. Today, the submarine fleet has fallen to 34 nuclear powered vessels. The remaining 115 submarines have been taken out of active service and are currently scattered along the coast line of the Kola Peninsula and in Arkhangelsk county, awaiting decommissioning. The Northern Fleet’s dilapidated infrastructure for managing spent nuclear fuel and radioactive waste has turned into ruins during the past decade.

To intensify the economic development of the Arctic, the Soviet Union built nine nuclear powered civilian vessels — eight icebreakers and one container ship. But with the industry’s downsizing following the collapse of the Soviet Union, this nuclear fleet faced economic hardships, as well as enormous expenses to handle radioactive waste and spent nuclear fuel.

The management of the hazardous products of submarine and icebreakers’ operation was not a top priority in the Soviet Union; Russia therefore inherited a whole package of problems it was unable to cope with on its own.

USA steps in
In the period following the break-up of the Soviet Union, the Soviet Nuclear Threat Reduction Act of 1991, championed through Congress by Senators Nunn and Lugar, has achieved significant results. The act, renamed the Co-operative Threat Reduction (CTR) programme in 1993, was designed to help the countries of the former Soviet Union destroy nuclear, chemical and biological weapons of mass destruction and their associated infrastructure, and establish verifiable safeguards against the proliferation of those weapons.

To ensure the decommissioning of ballistic missile submarines, CTR has created the infrastructure for their elimination both at the shipyards in north-west Russia — Nerpa at the Kola Peninsula and Zvezdochka in Severodvinsk, Arkhangelsk county — and in the Russian Far East where the Pacific Fleet is based — Zvezda shipyard. Later CTR started to contract shipyard directly to carry out the decommissioning of submarines as well as to create the infrastructure for spent fuel management. This year a nuclear fuel unloading site was commissioned at Zvezdochka shipyard. The first submarine to be de-fuelled there is a Typhoon class (TK-202) — the world’s biggest submarine and a cold war demolition machine. All in all, CTR is planning to completely dismantle 41 ballistic missile submarines by 2007.

CTR has been a success first of all in terms of securing weapons of mass destruction and its carriers, but the programme also assisted in creating the needed infrastructure to dismantle submarines and to manage unloaded spent nuclear fuel, as well as to process liquid radioactive waste generated as a result of decommissioning. 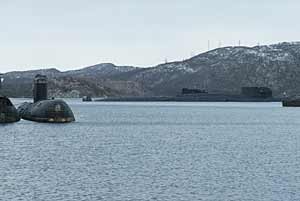 environmental issues, they think they are issues the Pentagon should not be involved with," said a US government official to Bellona Web earlier this week.

According to non-proliferation experts, CTR is unlikely to receive a permanent waiver and its activities may become limited solely to weapons’ destruction. In today’s reality, though, it is very hard to separate environmental and non-proliferation programmes. Securing radioactive and nuclear material has become crucial not only for the environment, but also to a larger extent it has become vital in preventing "evil doers" getting hold of such materials.

Fortunately, European countries have recently shown greater interest in providing their share of assistance, which is now starting to be of great importance.

Nerpa shipyard exemplified
Nerpa shipyard was one of the visit points for European Parliament members, their State Duma colleagues and Bellona last week. The shipyard has so far decommissioned nine submarines, including six ballistic missile submarines, or SSBNs.

SSBNs were scrapped using of CTR supplied equipment and with CTR funds. But CTR’s contract with Nerpa is due to expire, as CTR plans to transfer all future decommissioning operations to Severodvinsk where an extensive infrastructure for spent nuclear fuel management has been built.

While Nerpa has American supplied equipment for cutting-up submarines, it is unlikely to use these equipment since the spare parts are expensive and the Russian state budget does not have enough funds to pay for the decommissioning of non-strategic submarines, largely referred to as multi-purpose submarines.

Around 80 multi-purpose submarines are waiting to be decommissioned in the Northern Fleet, posing no strategic danger to the United States, but threatening the surrounding environment and containing tonnes of spent nuclear material in their reactors. The long debate over western assistance for decommissioning multi-purpose submarines has so far achieved no result from the USA, despite Senator Lugar’s intensive lobbying of such an initiative. But the European countries may well step in and fill the gaps which CTR has been unable to fulfil so far.

And Nerpa shipyard has the available infrastructure to deal with multi-purpose submarines.

In July this year, the Northern Dimension Environmental Partnership, or NDEP, a European initiative to channel funds to environmental problems in north-west Europe, arranged a pledging conference, where European Union countries, Norway and Russia contributed 110 million euro, including 62 million euro exclusively for nuclear safety issues in north-west Russia. In the draft projects list, the sites, which were not covered by CTR due to the restrictions imposed on the programme, but may well be secured with the European assistance. Among those sites is Andreeva Bay, an infamous dumping ground for spent nuclear fuel and radioactive waste in the western part of the Kola Peninsula. The European delegation was able to visit the premises of Andreeva Bay during their visit last week.

During the visit to Nerpa, Bart Staes, the head of the European delegation and member of the European Parliament, also announced that his group — Group of the Greens/European Free Alliance — filed an amendment to the EC’s 2003 budget for 60 million euros for assistance in the nuclear sector, which contains a specific item about channelling the funds for radwaste management at the Kola Peninsula. Mr Staes mentioned specifically that the amendment was prompted by Bellona’s work in the area of nuclear safety in Russia.

G8 pledge — uniting the efforts
The G8 "Global Partnership against the Spread of Weapons and Materials of Mass Destruction WMD" issued by the world’s eight leading industrial nations at the G8 Summit on 27 June 2002, is an initiative aimed at accounting, securing and clearing up Russia’s vast nuclear legacy.

The initiative is still in a rather vague state, but it can be seen as an attempt to unite all efforts aimed at securing Russia’s nuclear legacy. This gives the chance to involve Europe and other countries more actively into the work that the United States has been doing for the past decade.

The countries taking part in the initiative can fill the gaps, which arose due to the limitations in the existing programmes, such as CTR, and ensure that the artificial distinction between environmental issues and non-proliferation are wiped away. After all, any radiological device can become a weapon, thus securing those devices makes the world a safer place both from the environmental and security standpoints.

Huge undertakings stem from small steps
Bellona has created an Inter-Parliamentary Working Group, IPWG — whose members visited Murmansk last week — back in 1998. This forum provided politicians from Russia, Europe and the United States with the possibility to focus on issues in nuclear safety co-operation. Such issues still exist and require quick resolution. The signing of the agreement referred to as the Multilateral Nuclear Environment Programmes in the Russian Federation, or MNEPR, is just one example. This agreement would free the funds pledged by the NDEP, for example. The harsh debate over CTR in the US Congress is another issue.

In Bellona’s opinion, the lawmakers from different countries should understand the importance of nuclear security issues and act swiftly in the areas where executive bodies fail to come to an agreement. The MNEPR agreement is a prime example. There is always room for compromise when a goal is clear, and unless this room is used words and pledges will just evaporate. And it is important those compromises should be agreed to move ahead with such undertakings as the G8 initiative.