One hot morning in early July, three brick masons, carrying clinking shoulder packs, showed up for work at the Sosnovoborsk Heat and Electrical Central, known by its Russian abbreviation as TETs. 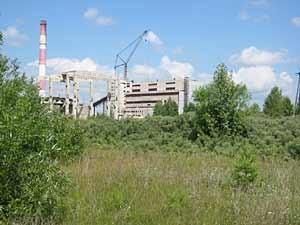 But the three who turned up for work that day at the half-constructed fossil fuel plant, located some 15 kilometres from the Zheleznogorsk Mining and Chemical Combine, or GKhK, told Bellona Web that they would be — and have been for months — the only workers likely to be coming to work. Identifying themselves only as "residents of Central Asia," they freely said they were working without documents or contracts, and only vaguely knew what kind of construction they were to be performing.

"Every couple of days, someone comes by and pays us in vodka and a few roubles," said one worker — older than the other two — explaining the clinking in his daypack.

"Then we set to work with bricks and mortar, building some sort of wall, but we’re not sure what it’s for because we have no design to follow."

The fossil fuel plant has been under construction for more than a decade.
But non-proliferation funding from the US Department of Energy (DOE) is slated to complete the plant’s construction in order to supply heat and power to the closed nuclear city of Zheleznogorsk, which has previously staved away the hard Siberian freeze with a weapons-grade plutonium-producing reactor. But that reactor is scheduled to be shut down in four years.

The problems, he said, according to the RIA news agency, stemmed from the necessity of converting the production of the city, closing down those workshops engaged in weapons production, while maintaining the scientific viability of the combine.

Of equal importance, he said, was completing the construction of the dry storage facility for spent nuclear fuel (SNF) at Zheleznogorsk’s RT-2 facility, leaving little eleventh-hour doubt that controversial SNF imports will soon be apart of Russia’s nuclear landscape.

"This city will maintain its scientific value in the nuclear community," Vinogradov said, according to Interfax news agency. In order to make sure that was the case, he ordered the administration of the Zheleznogorsk GKhK to have a report about the next 20 years’ development of Zheleznogorsk on his desk soon, RIA reported.

Presumably, this development begins with the refurbishing of the Sosnovoborsk TETs, with US DOE funding, as quickly as possible.

Pressures from the Americans
The option of building a brand new fossil fuel plant for Zheleznogorsk, instead of refurbishing the old one has, according to DOE officials, been discussed by the Russian side. But according to Anatoly Mamaev, of Zheleznogorsk’s Citizens’ Centre for Nuclear Non-Proliferation, "the time has long come, and therefore this question of where to build the fossil fuel plant has to be decided quickly — otherwise the Americans may not give us the money."

"They have already warned us once," he told Bellona Web.

The most logical choice, therefore — for which a local subcontractor, Glavspetsstroi, has already been picked, according to news reports — is the half-constructed behemoth outside Sosnovoborsk, located 15 kilometres from the closed nuclear city.

Why the hurry? Because the Zheleznogorsk plutonium reactor is scheduled for shut-down by 2006 as part of a non-proliferation agreement with the United States, which has already closed all the 14 plutonium reactors of its own.

Russia has two other plutonium reactors, both located in Seversk, near Tomsk in Central Siberia, and they too are scheduled to close in 2006. Combined, these three reactors produce 1,500 kilograms of weapons-grade plutonium a year. Seversk will also receive a fossil fuel plant on the DOE tab.

But progress in the decade-long doldrums of economic reform at the Sosnovoborsk plant has not been rapid, and the DOE has a major task before it in jump-starting the effort.

The plants construction began in the mid 1980’s in order to provide power and heating backup to the nuclear city should routine, or otherwise, shutdowns of the plutonium reactor plunge the Siberian city into cold and darkness. Funding for the construction, however, dried up altogether with the disintegration of the Soviet Union in 1991, and since then construction has been insignificant and intermittent.

Whose plant is it? 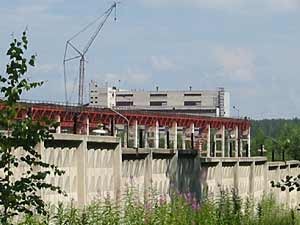 Nuclear Minister Alexander Rumyantsev said at a recent press conference that RT-2 will eventually hold 80 tonnes of fissile waste. This, however, was at variance with other projections by Minatom and Zheleznogorsk officials, who said the temporary SNF storage facility will hold 33,000 tonnes.

Math errors aside, Minatom proposes to charge $1 billion for 2,000 tonnes of foreign SNF — which Rumyantsev said significantly undercuts Russia’s main competitors — that will remain in the RT-2 dry cask storage while Minatom applies the proceeds of its import fees to upgrading Russia’s ailing reprocessing infrastructure.

The storage of SNF will mean big cash dividends, both for Zheleznogorsk, and the Krasnoyarsk region as a whole, and administration will be paid several million dollars for hosting the waste.

Zavdugayev even cited areas where the Zheleznogorsk economy could grow — thanks precisely to the fossil fuel plant he not minutes before denounced as ecologically unsound and a plague to the people of his city.

"We are planning aerospace fuel experiments — like NASA’s — with plutonium and uranium as the reactor programme phases out," he said. Minatom would not comment on these specific plans.

"There will be no lack of work for our brain power, but this is something these greens’ just don’t understand. They hear SNF and plutonium, and alarm bells go off. Well, we already have some 3,000 tonnes of SNF in storage at RT-2 and it poses a danger to no one. No one."

Points of "agreement"
If there is any common ground to be found between self-financed activist like Spirin and a paid representative of the nuclear industry like Zavdugayev, it is the potential for further pollution from the TETs once it goes into operation.

Although Zavdugayev seemed to mention the potential pollution from the TETs as a rhetorical tool to turn the tables on the environmentalists, rather than an expression of actual concern for the environment, Spirin raised this point in a later interview.

"The TETs is being built on old plans with old methods and there is a great risk that the area will be severely harmed by pollution from the smoke stacks that will billow out a layer of ash on the surrounding forests," he said.

"As for the DOE plan, anything is possible — if they refurbish the plant to ecological standards, then I am for the plan. But I don’t think it will help us much if they stick to the old plant blueprints, which they might do if they are concerned about the 2006 deadline."