A new building has been raised this winter close to the nuclear storageship Lepse. This building, The Lepse Village, will provide living- and working condition for the crew on Lepse, and reducing their radiation exposure. The Bellona Foundation finances the project. 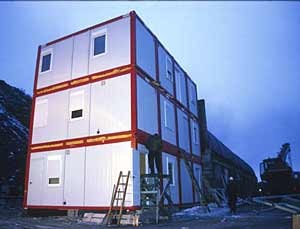 Lepse, a storage ship for nuclear waste, has since 1986 been moored to the quayside at the nuclear icebreakerbase Atomflot in Murmansk. Stored onboard the ship is damaged spent nuclear fuel and other radioactive waste. Because of the nuclear waste, the exposure for the crew on Lepse are higher than allowed by the Russian regulations. In addition to the crew of 8, some 30 workers on Lepse are also exposed to elevated radiation from the ship’s cargo.

Due to different unsolved matters the international project to solve the problems with Lepse’s dangerous cargo has been postponed. The project was initiated in 1994, but unsolved questions dealing with tax-exempt status and liability in case of accidents has so far stopped the project. Waiting for the spent fuel to be removed, crew and workers are still onboard Lepse, receiving more than allowed radiation doses. Because of the elevated exposure for the workers Murmansk Shipping Company (MSC) asked Bellona Foundation for assistance.

In co-operation with the Norwegian Uniteam ASA, Bellona and MSC developed combined working- and living accommodation based on 20 feet industry containers. The containers are fitted out with kitchens, sleeping cabins, laboratories and radiation control zone with showers. Lepse Village is situated at a safe distant from the ship Lepse, some 100 meters.

Each of the three floors consists of four containers. Since the construction is based on containers it is flexible and easy to move. When Lepse will be emptied for nuclear waste, the whole structure can be taken apart and transported to another site.

The containers were transported from Norway to Murmansk by MSC in October 2000. During two periods in November and December the Lepse Village was constructed with workers from MSC under the supervision of personnel from Uniteam. Bellona representatives from Oslo and Murmansk have taken part in the construction and controlled the work. During the January electrical installation will be done, and water- and sewage will be connected to Lepse Village.

This project is of great importance since it will reduce the occupational exposure for the crew and workers on Lepse, who are doing an important job keeping Lepse in good technical condition and controls the storage of the spent nuclear fuel onboard. Later on it will also be possible to use this construction at other sites where there is need for a living- and working accommodation for workers dealing with nuclear waste.

Lepse, which was built in 1936, has a hull made of 12 mm steel plates. Inside the two storage sections, there are 634 partly damaged spent nuclear fuel elements. MSC and the French company SGN have agreed on the final details of a project on removal of the spent nuclear fuel. The final plan to dismantle Lepse, presented by Minatom, is approved by all Russian agencies involved with the Lepse-project; among them Ministry of Transportation, Atomflot, Gosatomnadzor (GAN) and Mayak. Before all the necessary legal agreement between the contributing parties and Russia have been signed, the project is brought to a standstill.