Commissioning of liquid radioactive waste treatment facility at Atomflot in Murmansk is yet to happen. A Norwegian report tries to explain why. 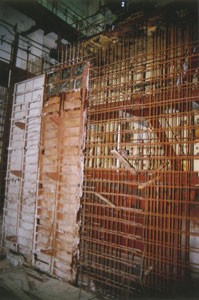 The new treatment plant for liquid radioactive waste at the nuclear powered icebreaker base Atomflot in Murmansk was initiated back in 1994. Norway and the United States provided financial aid for the construction of the plant. The plants aim was to push Russia into signing the London Dumping Convention, which prohibits radioactive waste discharge into seas.

The facility was to be up and standing back in 1996 according to the initial plans. By the end of 1996, the construction work was hardly started, hence the planned commissioning was postponed for one year, followed by another year, and, yet, another.

The plants main technical challenge today is the hydro-unloading system of sorbents generated as a result of liquid radioactive waste processing. The sorbents get stuck when pushed through pipes to the mixing plant, which blends them with concrete. Either the pipes are to long or the pumps are not powerful enough.

Minatom said earlier that the facility would be ready until the New Year. Todays plans suggest that testing with fresh water can start in late January, given the temporary prototype system for sorbents removal is in place. The industrial system will be installed later, according to the plans.

Another problem is the need for verification of the various parts of the facility so they can work well together. VNIIPIET institute in St Petersburg was the main designer of the treatment facility.

The constant delay of the project completion has created lots of frustrations among the Western project managers. A recent report by the Norwegian Radiation Protection Authority attempts to list those issues. Difficulties with the delivering of equipment, changes in the Russian laws and regulations, numerous malfunctions with the equipment followed by no funds for repairs, misleading budgets and lack of projects management are just some of the problems which have haunted the project since its beginning back in 1994. 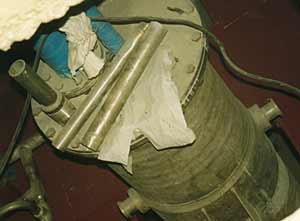 Blaming USA
The Norwegian Radiation Protection Authority is also blaming American participants in the project for some of the troubles. The report says that representatives from the USA did often accept the short deadlines for the project since they intended to end it before the presidential election.

American equipment to the facility delivered by the company Honeywell had, according to the report, also created a lot of trouble. The U.S. part provided no funds to adjust the equipment to the needs of the treatment plant.

On the other hand, the Norwegian Foreign Ministry criticised the Radiation Protection Authority for incompetent management of the project and lack of experience.

No deadlines set
Today, the construction of the plant is completed, but the required acceptance testing of the facility is not done due to a long list of technical problems. Reportedly, the money made available has already been used and new funds are required to finish with the project. The approximate project price tag so far is around $4m to $5m.

Upon request, the Norwegian deputy minister of foreign affairs, Espen Barth Eide, tells Bellona that no extra financial aid will be given to complete the treatment facility. Norway has officially not received any requests for extra funding from Russian partners either.

Bellonas sources in Murmansk Shipping Company say that no plans exist to ask Norway or USA for additional funding. The facility is being financed from the Russian budget the past year. To complete the plant around $180,000 are required, while only $40,000 are currently available.

Official plans suggest the facility will be operational in three months. More realistic estimates name the end of 2001.