A magnitude 5.8 earthquake on the US East Coast on Tuesday at about 1:45 pm local time forced the shutdown of two nuclear reactors at a Virginia power plant, but other nuclear power plants on the Eastern Seaboard were reported to be unaffected and operating normally. 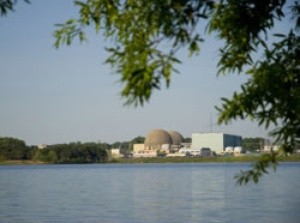 The Virginia nuclear plant had, however, been singled out as vulnerable in a US Nuclear Regulatory Commission (NRC) report last year that focused on potential seismic hazards to 27 US nuclear power plants east of the Rocky Mountains.

The 5.8 magnitude quake’s epicenter was just a few miles from the two-reactor North Anna nuclear power plant operated by Dominion Resources in Mineral, Virginia, 100 kilometers southwest of Washington. It caused building evacuations of the Capitol and other public buildings in Washington DC and in New York City.

The jolts were felt as far north as Canada and as far west as Detroit, US press reports indicated. Minor damage has been reported.

The plant lost power and automatically halted operations after the quake. The plant lost offsite power and three diesel generators kicked in to keep the reactors’ cores cool, said a Dominion spokesman.

A fourth generator, however, failed. The spokesman added that that there is three day’s worth of diesel fuel onsite to keep the back up generators operational, assuming the remaining generators operate properly.

The North Anna reactors are of the Westinghouse Pressurized Water design and went on line in 1979 and 1980 respectively. Since then the reactors have generated approximately 1,200 metric tons of spent nuclear fuel containing about 228,000 curies of highly radioactive materials – among the largest concentrations of radioactivity in the United States.

In the wake of Fukushima – and several European powerhouses like Germany opting out of nuclear power because of the Japanese disaster – some US and international experts are renewing their calls that America reconsider the frailties of its own nuclear power plants which are all to eerily paralleling some of those seen in Fukushima.

The NRC said North Anna’s shutdown was safe and posed no risk to the public.

But it remained unclear as to when offsite power could be restored or when the 1806-megawatt plant, which remained on alert, could restart.

Bellona physicist Nils Bøhmer and other observers in the US said this fact alone was troubling.

“The fact that you’ve had an earthquake and that a nuclear power plant it operating on back-up power and that outside power still hasn’t been restored shows us that US plants are also vulnerable to natural disasters,” he said.

While nuclear power plants can operate safely on back-up power, failure of diesel generators was a key reason for the ongoing disaster at Japan’s Fukushima Daiichi plant after a 9.0 magnitude quake and tsunami on March 11.

“Nuclear power plants lose a significant margin of safety when they’re forced to rely on these emergency back-up systems,” said Paul Gunter, director of reactor oversight at Beyond Nuclear, an anti-nuclear lobby group.

One reason for that – particularly in the United States – is because when back-up diesel generators fail – as one at North Anna did – the last line of defense is battery power.

Batteries at 11 of America’s 104 nuclear reactors have back up generators that can operate for eight hours, and 93 have only four hours reserve.

When that reserve wears out, there is no longer any way to cool the reactors, said Edwin Lyman of the Union for Concerned Scientists, in US Congressional testimony in March following Fukushima.

Robert Alvarez, a former Energy Department official under the Clinton Administration and the head of the Institute for Policy Studies, drew attention to troubles with North Anna’s spent nuclear fuel storage pools – another issue that plagued the early days of the crisis at Fukushima.

“Nearly 40 percent of the radioactivity in the North Anna spent fuel pools is cesium-137 – a long-lived radioisotope that gives off potentially dangerous penetrating radiation and also accumulates in food over a period of centuries,” he said in a statement today.

The North Anna plant, like the majority of American nuclear reactors’ spent fuel storage pools, are intensely over crowded – more so even than those at Fukushima where.

According to Alvarez, “the spent fuel pools at North Anna contain 4-5 times more than their original designs intended.”

He added that “As in Japan, all US nuclear power plant spent fuel pools do not have steel lined, concrete barriers that cover reactor vessels to prevent the escape of radioactivity. They are not required to have back-up generators to keep used fuel rods cool if offsite power is lost,” he said.

“Even though they contain these very large amounts of radioactivity, spent reactor fuel pools in the US are mostly contained in ordinary industrial structures designed to protect them against the elements,” he said.

Seismic reviews done poorly in US

Victor Gilinsky, who was an NRC commissioner at the time of the Three Mile Island nuclear disaster in Pennsylvania in 1979, said that he was concerned that safety at plants like North Anna were not being reviewed as understanding of earthquakes increases.

“It is important to review the seismic design of the plant in terms of current knowledge,” he said “Instead, the NRC has been relicensing plants without any real safety review – they do not question any of the original licensing conditions, they only check to see whether the plant has a program to deal with old equipment. It’s an irresponsible approach.”

Vladimir Slivyak, co-chair of the Russian Ecodefence anti-nuclear group, was categorical in his response to the first major seismic scare since Fukushima.

“The choice is simple – either shut reactors down or improve safety systems. Both are expensive; shut downs are safer in the long run,” he said. “Another Fukushima is unacceptable.”

The North Anna plant was designed for a 6.2 magnitude quake, but Lyman said that yesterday’s quake tested a disquietingly narrow margin.

“It was uncomfortably close to design basis,” Lyman told Reuters.

“If Fukushima wasn’t a wake-up call, this really needs to be to get the NRC and industry moving to do seismic reviews of all the nuclear power plants in the country.”

Bellona’s Bøhmer agreed that seismic reviews of US plants were sadly lagging following the Fukushima disaster. But Bøhmer also contended that measurements on the Richter scale are measure algorithmically, meaning that yesterday’s 5.8 earthquake is not nearly the same level as a 6.2 magnitude quake.

MIT engineers released data yesterday showing that the US quake was 10,000 times weaker than the one experienced by Fukushima Daiichi.

North Anna singled out as vulnerable to quakes

North Anna’s reactors are among 27 east of the Rockies that the NRC highlighted during a seismic review last year as presenting a potential hazard, due to the amount of ground-shaking they were designed to withstand.

Twelve other nuclear plants along the Eastern Seaboard declared an “unusual event” following the quake, the lowest of the NRC’s emergency classification ratings. North Anna’s “alert” status is one step further up on a four-step US emergency scale.

The last time a quake of similar magnitude hit Virginia was in 1897, the US Geological Survey said. A 7.3 magnitude quake, the largest recorded in East Coast history, hit South Carolina in 1886.