BOSTON – The Massachusetts Institute of Technology (MIT) was cited for two violations at its nuclear research reactor after a worker was exposed to a startlingly high dose of radiation in October, federal inspectors with the US Nuclear Regulatory Commission said in interviews Friday.

Published on December 21, 2007 by Charles Digges 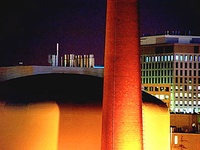 Thought the incident was rated as “not serious” by regulators, it points to the leitmotif of dangers associated with research reactors and the relative independence from strict safety guidelines that their commercial counterparts are forced to adhere to.

One of the most prestigious technological universities in the world, MIT’s campus is located on the banks of the Charles River in Cambridge, Massachusetts and surrounded by an urban population of more than 2 million in the Boston area. The MIT reactor is the second largest research reactor ion the United States, second only to the research reactor at the University of Missouri, Columbia.

A special NRC inspection triggered by the irradiation of the worker found the MIT had fallen short in making reasonable checks to assess the scale and extend of radiation levels present in work areas surrounding the 49 year old research reactor as required by NRC regulations, said agency spokesman Neil Sheehan.

MIT also failed to provide the injured worker adequate safety training as required for all employees who are likely to receive a dose of more than 100 millirems of radiation exposure in a year, Sheehan said.

Worker in good condition, but information sparse
The university would not immediately release the name or position of the exposed worker, but a spokeswoman for the press office said the worker had recovered from the incident.

MIT’s Nuclear Reactor Laboratory Director David Moncton, who is authorised to comment further on the incident, had not returned Bellona Web phone messages by this printing. An update will be issued if Moncton can be reached.

The failings leading to the radiation exposure incident are listed in the NRC report as Severity Level IV violations, said Sheehan, which is a category reserved for incidents of very low safety significance.

History of the incident
On October 17th, MIT reported that one of the reactor’s operators had a radiation measurement of more than four rems for the period between July 1st and September 30th.

That accounts for more than 80 percent of the total radiation that a worker can be safely exposed to during an entire year, said Sheehan. All other employees’ radiation exposure measurements for the same time period were normal, he said.

"The NRC inspection team noted various weaknesses" in MIT’s program to monitor radiation levels, according to the NRC report released Thursday, which also described the school reaction to the high radiation exposure as "prompt, comprehensive, and technically sophisticated."

The school notified its own safety officials and the federal commission.

"The university will have to respond to the violations" within 30 days, Sheehan said. "We will use that information to determine whether further enforcement action is necessary to ensure compliance with agency requirements."

Dangers of research reactors
Research reactors, including the one at MIT are much smaller in size than their commercial counterparts that are used for energy production. But they deal with atypical fuels and many produce highly enriched uranium and plutonium – which depending on institutional security can pose high safety and proliferation risks.

MIT’s five-megawatt reactor, which went online in 1958, uses weapons grade, highly enriched uranium as fuel, according to the University’s newspaper, The Tech

Poor training at research reactors, Bøhmer is a problem of international scale, as are general safety problems for workers.

“The management of these reactors tends to be ad-hoc and they are typically old and lack more modern safety features of commercial power plants,” said Bøhmer.

Bøhmer noted that the report on research reactors worldwide by the IAEA cited fire safety violations and high vulnerability of workers to irradiation as their chief dangers, given that each research reactor is tended to by individual institutions that often do not have or observe codified national nuclear safety codes.

“And such safety codes are hard to nail down by the very nature of the reactors Is for experimental purposes,” said Bøhmer. “They deal with new combinations of fuel – not always safe.”

In the United States, said Sheehan, all research reactors fall under the purview of the NRC, and said he was “sure there had been other incidents” at the MIT reactor, given it’s age.

Nuclear proliferation
Nuclear proliferation is also another danger of research reactors, and have been identified by the IAEA and Bellona. Primary among these dangers is the fact that HEU is stored in universities and research institutes as opposed to fortified military compounds, making the fuel far more vulnerable to terrorist seizure.

Nuclear Reactor Laboratory Director David Moncton told The Tech in a 2005 interview that the MIT reactor has at most two kilograms of fresh HEU on site at any time – a small fraction of what is needed for a bomb. He said the fuel is delivered on a just-in-time basis, so that the reactor does not need to stockpile fuel, the newspaper reported.

To mitigate the dangers of at least Russian origin HEU at research reactors throughout the world, the United States, Russia and the IAEA signed off on the Global Threat Reduction Initiative to repatriate Russian origin HEU from 20 reactors in 17 countries.

The programme is moving successfully, and last week, the Czech Republic sent some 80 kilograms of HEU back to Russia for storage and eventual reprocessing.

As the agency responsible for overseeing safety at research reactors in the United States, the NRC’s Sheehan said that the post 9/11 world had seen serious upgrades to security at US research reactors. He said this included 24-hour surveillance patrols, NRC safeguards and strict access restrictions, but refused to disclose further details about security at the MIT reactor.

Recent incidents at MIT’s reactor
The last recorded incident of a notice of violation sent to MIT regarding the use of its experimental reactor by the NRC was dated October 2003 of a July 2003 incident during which a reactor operator was found asleep at the controls.

MIT was assessed a $5,500 fine for the incident, and it was assigned a Severity Level III violation by the NRC.