Plans to advance Britain’s nuclear waste storage plans by searching for a site to build a $19 billion long-term repository in Cumbria – home to the UK’s Sellafield site – have been scuttled by a vote in the Cumbria County Council Wednesday not to move ahead with the venture.

Published on January 31, 2013 by Charles Digges 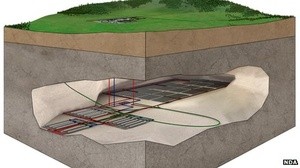 Specifically the county voted down an advanced “stage four” exploration for the site – a stage that would have encompassed detailed geological investigations and discussions over the social and economic implications of hosting such a deep underground spent nuclear fuel and waste store, local UK media reported.

The failure of the vote in Cumbria poses a substantial blow to Britain’s country-wide plans to engage in a national nuclear power station build up as part of the country’s efforts to cut greenhouse gas emissions – despite substantial proof that nuclear power would only compound future climate difficulties, a position Bellona supports.

Britain has also imposed on itself a prohibition on exporting spent nuclear fuel and nuclear waste, thus finding a repository for its Cold War legacy waste is becoming all the more urgent.

“The absence of final solutions to spent nuclear fuel and radioactive waste in repositories is the central problem of the worldwide nuclear industry and a special challenge to Britain and its enormous quantities of radiological waste,” said Bellona physicist and General Manager Nils Bøhmer.

“It is unethical to continue to pursue the construction of nuclear power plants until the issue of geological repositories is solved and they are operational,” he said.

The UK’s Department for Energy and Climate Change said it was “disappointed” but that the “no: vote would not “undermine” the long-term disposal of nuclear waste, said the BBC.

The decision, however, was greeted by cheers from local environmental campaigners when it was announced outside the council chamber in Carlisle.

The 10-member council voted 7 to 3 against continuing with the plans in a surprise reversal of Cumbria’s earlier courting of the repository build.

The selection of such a site is based on a system of communities actually volunteering to host such repositories, yet at the same time giving them the right to withdraw from the process at any time, World Nuclear News reported. Such volunteerism is the principle behind successful programs toward building nuclear repositories in Finland and Sweden. But those nations have only gotten so far, said Bøhmer

“Only Finland and Sweden have gotten so far as actually selecting a site for their proposed repositories,” he said.

The Cumbrian Borough of Copeland actually voted 6 to 1 in favor of continuing the project. Allerdale had also expressed formal interest in hosting the repository project, reported WWN.

But the Cumbria County Council’s vote overrides Copeland Borough’s decision. The hopes of Allerdale, which had yet to hold a vote, and Copeland is therefore moot due to a previous agreement that both Borough and County agree to host a repository.

“As such, the current process will be brought to a close…” said the Department of Energy and Climate Change in a Statement.  The department “will now embark on a renewed drive” to engage with other communities that may be interested and able to host a disposal site.

Council leader Eddie Martin issued a long statement at the meeting, saying, as quoted by the BBC: “Cabinet believes there is sufficient doubt around the suitability of West Cumbria’s geology to put an end now to the uncertainty and worry this is causing for our communities,” adding that, “Cumbria is not the best place geologically in the UK and the government’s efforts need to be focused on disposing of the waste underground in the safest place, not the easiest.”

“Cumbria has a unique and world-renowned landscape which needs to be cherished and protected. While Sellafield and the Lake District have co-existed side by side successfully for decades, we fear that if the area becomes known in the national conscience as the place where nuclear waste is stored underground, the Lake District’s reputation may not be so resilient,” he continued.

No country on the planet has yet solved the issue of how to store spent nuclear fuel and radioactive waste for the hundreds of thousands of years it takes to become innocuous.

It has further been agreed by most nuclear experts that only deep geological storage is the only way to reach that level of secure storage.

But President Barack Obama’s yanking of US efforts to build a repository at Yucca Mountain in Nevada after independent environmental studies revealed nuclear waste would potentially contaminate underground water, have cast a shadow even on that.

Currently Finland is building the Onkalo repository, which is the furthest along among international attempts to build such facilities, with a scheduled operational date of 2020, though final local approval is still required.