A probe into an enormous radioactive leak at the United Kingdom’s flagship Thorp reprocessing facility at Sellafield – which was just released publicly by Britain’s Health Security Executive (HSE) – harshly appraised management and workers for ignoring signs of a serious impending incident.

Published on March 3, 2007 by Charles Digges

The site’s operator, British Nuclear Group, Sellafield, was fined £500,000 after it pleaded guilty last year to breaching aspects of the UK’s Nuclear Installations Act of 1965.

The Thorp leak, which occurred in the reprocessing facility’s feed clarification cell, went undetected for eight months – from August 2004 to April 2005 – spilling 83,000 litres, or 20 tonnes, of plutonium and uranium liquor onto the floor of Thorp’s hermetically sealed chamber.

No one was hurt and no radioactivity escaped into the surrounding environment.

Still, the event was a very close call, according to internationally recognised standards. The Thorp spill was classified by the seven-level International Nuclear Event Scale (INES) as a “3,”which indicates a “serious incident,” but is one step short of a full-blown accident. 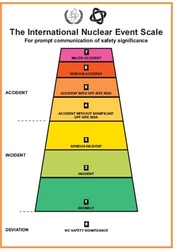 The fuel clarification cell was inspected in when plant workers noticed a drop in the level of plutonium and uranium held in one of Thorp’s two so-called Accountability tanks, which hold the toxic mixture, and where other elements such as metallic uranium, or tailings, are separated out. A remote camera inspection in April 2005 finally revealed a leak in one of the pipes leading into one of the Accountability tanks.

The ruptured pipe – which contained a design flaw – in the intricate structure of the feed cell was the primary culprit in the leak.

But the HSE report that came out last week concluded that routine ignoring of alarms by staff, negligent treatment of safety equipment and a general attitude among workers not to challenge management decisions was the main contribution to the leak’s dangerously long duration.

Thorp workers and management react to HSE evaluation
But Peter Kane, a trade union representative for Thorp workers, hotly contested the HSE assessment of workers’ responsibility for the incident, and said they reported low levels alarms and other irregularities to management on a regular basis.

“We reject those HSE notions that we failed to report alarms,” he said in a telephone interview with Bellona Web. “Our people reported alarms to management and were turned away.”

According to universally recognised accounts of the leak, Thorp workers began to notice slight changes in the uranium levels in one of the Acountability tanks in August 2004. Some 50 grams of uranium were detected in a sample test that was performed to isolate the cause of the fluctuation.

Kane said his workers immediately reported these changes to supervisors, but were either ignored or told such changes were “manageable.”

“The opinion on the floor, however, was that it was not manageable,” said Kane, referring to his workers’ opinion of the changing uranium levels.

“Management had the idea that the Thorp plant, because it was so new, built to such high specifications, that accidents were not possible and that the plant could not go wrong,” said Kane.

A representative of BNG who works closely with management, and who requested anonymity because he is not authorised to speak publicly on the incident, confirmed that management’s opinion of Thorp was something akin to that of an unsinkable ship.

As a result, management was not always thorough in responding to what HSE referred to as low level alarms that Kane said his workers reported time and again.

Peter Clements, who is a full-time union representative for Thorp management – which was spared non of the criticism leveled at Thorp workers by HSE – said it was “particularly unpleasant” to read the government assessment, but the workers and management alike were viewing it as “a lessons learned experience.”

Clements though challenged Kane’s assertion that management was the only group under the impression that Thorp was an infallible facility.

“Management and workers were responsible for perpetuating the idea that we were working in a plant with few flaws,” he said in a telephone interview with Bellona Web. “The ‘new plant’ mentality was still in force,” until the leak.

“This is an idea that has been trained out of the workforce,” he added.

Clements pointed out that despite the leak, the system for containing it was well engineered and did work as it was supposed in the event of a mishap.

“No one was in danger at any time because the engineering worked,” he said.

As a result of the leak, Thorp staff have undergone massive retraining from dealing with engineering flaws to emergencies and a newly instilled and thorough notion of safety culture at the plant, Clements said.

An unnamed spokesman for BNG told the daily Whitehaven News: “The incident was regrettable and clearly should not have occurred in the first place – the company appreciates that mistakes were made which led to the leak and enhancements to workforce training, operating instructions and responses to alarms have been made.”

HSE’s specific critique of the Thorp work force
When the remote camera detected the leak, all of Thorp operations were ceased to contain it. But HSE fixed the lion’s share of blame on a shoddy work culture that led to ignorance of the leak until it had already reached extremely dangerous proportions.

“An underlying cause was the culture within the plant that condoned the ignoring of alarms, the non-compliance with some key operating instructions, and safety-related equipment, which was not kept in effective working order for some time, so this became the norm,” read the report.

“In addition there appeared to be an absence of a questioning attitude, for example, even where the evidence from the accountancy data (on levels in the tanks) was indicating something untoward, the possibility of a leak did not appear to be considered as a credible explanation until the evidence of a leak was incontrovertible,” HSE continued.

The HSE report went on to stress the importance of cultivating a “questioning attitude” from plant workers to the highest levels of management regarding potential safety issues, citing the need to “encourage challenge” to events that are often written off as insignificant blips on the radar screen that could – as in the case of the Thorp leak – turn out to be indications of more significant system failures. These attitudes, said the report, “need to be instilled and demonstrated by the most senior managers.”

HSE also indicated there should be a higher level of vigilance among workers, who, the report said, should be observing each other’s performance as well as the plant’s condition.

The report also devoted some attention to technical flaws in the construction of Thorp, saying that the pipe rupture was caused by a design inconsistency. But the thrust of the HSE report maintained that human error and failure to react were to blame.

“Supervisors did not regard low level alarms as being as important as high alarms, so they were not always responded to…the plant was operated in a culture that seemed to allow instruments to operate in alarm mode rather than questioning the alarm and rectifying the relevant fault,” HSE wrote.

Thorp to be back in operation soon
Despite the accident, THORP was nonetheless issued a formal consent on January 9th by Britain’s Nuclear Installations Inspectorate (NII) to resume operations, according to the HSE website. NII was satisfied that Sellafield had complied with the 55 recommendations HSE had made in its 28-page report on the accident.

However, there is no clear timetable on when the Thorp plant will return to operational status, according to Britain’s Nuclear Decommissioning Authority (NDA). The NDA confirmed in a statement that, despite HSE approval, it was still unclear when Thorp would be back in business. Clements said that the plant was ready to resume operations “next week, tomorrow,” but that the NDA was still dealing with a downstream plant that was delaying Thorp’s reopening.

Clements said he thought Thorp would realistically be back on line this year.

But the delay has served to anger Thorp’s foreign customers – especially Germany, which had contracted to reprocess 130 tonnes of nuclear waste. As a consequence, several German nuclear utilities have brought suit against Thorp.

When the plant closed because of the accident in 2005, it had reprocessed 5,729 tonnes, leaving an outstanding balance of 1,250 that BNG estimates will be reprocessed by 2009 at the earliest, the HSE website said.

According to the environmental group Cumbrians Opposed to a Radioactive Environment (CORE) a 42-page writ filed by the German customers to the High Court in London indicates that the German firms were told that the additional cost it will take to reprocess their fuel as a result of the leak and subsequent repairs would be passed on to them, CORE said in a statement.

The German writ contests this additional cost, citing that the Thorp leak – as indicated by BNG’s guilty plea to breaches in nuclear safety – was self-inflicted through negligence and that customers should not have to bear the financial burden.

CORE’s Martin Forwood said in a statement that “the clear disdain for its customers shows how BNG has now abandoned any pretense that it might secure further business form them…There is no longer any justification for resuscitating this terminally ill plant and we’ll be calling again for it’s immediate and permanent closure.”

Forwoods statement, however, somewhat contradicts the approach of many of England’s anti-nuclear intentions. According to NDA strategy, much of the revenue to shut down the 20 aged and dangerous facilities, including Sellafield, that the NDA has been charged with decommissioning is slated to come from Thorp revenues.