Great Britain will work towards cutting emissions of carbon dioxide by 60 percent by 2050.

Published on February 24, 2003 by Erik Martiniussen 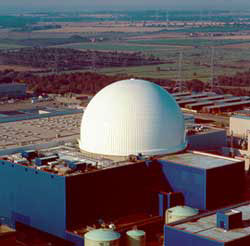 This is one of the ambitious promises presented today in the British Governments long expected Energy White Paper. The paper, presented by Trade and Industry Secretary Patricia Hewitt, announces a range of practical measures including an ambition to double the share of electricity from renewable energy sources by 2020 from the existing 2010 target of 10 percent.

No Nukes
The White Paper outlines how a cut of 15-25 million tonnes of carbon could be achieved by 2020. Such a cut is necessary to ensure firm progress towards 60 % reductions by 2050.

Within the context of the need to cut carbon emissions, the White Paper also sets out the Government’s policy on nuclear power. The paper states that current economics make nuclear energy an unattractive option.

Britain’s largest Nuclear Energy supplier, British Energy, descended last year into a financial chaos. Facing bankruptcy, it has been bailed out by the government to the tune of £650 million, with much more promised.

The White Paper is a big blow to Britains nuclear industry. The final outcome of more than five years of argument over Britains future energy strategy rules out any plans for building new nuclear power plants. Any further decision to proceed with the building of new nuclear power stations would only follow another full public consultation.

Since government advisors for one year ago recommended against the building of new nuclear stations, the nuclear industry has been fighting a fierce rearguard action to safeguard its future.

According to the British newspaper the Sunday Herald, the Industry have had secret top-level presentations to the Treasury and other government departments by the British Nuclear Industry Forum (BNIF). According to the newspaper, BNIF argues that renewables are small-scale, expensive and unreliable.

A new energy policy
Commenting on the White Paper, Trade and Industry Secretary Hewitt said: "Our country needs a new energy policy. We need to make sure we have secure energy at affordable prices, but we need to use energy more efficiently and more urgently address the impact we make on the environment. Climate change is an obvious and present danger. Without immediate action to reduce carbon emissions, the Earth’s temperature is currently set to rise faster than at any time in the last 10,000 years.

"The Government is serious about cutting carbon emissions, but we know this cannot be achieved without a fundamental review of the way we produce and consume energy. We need to use less by improving energy efficiency and we must match this with a major expansion in renewable energy. With this challenge comes great opportunities – for UK scientists, engineers, manufacturers and businesses. We have world-class energy companies and a wealth of expertise in this country which will help put us in the lead in delivering cleaner energy and which will entail lower energy consumption across the globe.

The Paper also includes proposals for:

– a new carbon trading system to come into effect from around 2005 that will give energy suppliers and consumers incentives to switch to cleaner energy;

– speeding up changes to building regulations and setting tougher standards for energy efficiency in new homes, refurbishments and electrical products;

– setting up Fuel Cells UK to put UK industry at the forefront of clean fuel technologies;

– working with the EU and car manufacturers to improve vehicle efficiency. A report will be produced each year by a cross-Government policy network, based in the DTI, showing the progress towards cutting carbon emissions and other measures in today’s White Paper.