Bellona activists, dressed up as Santa Clause, entered the 20 meter Norwegian Christmas tree on Trafalgar Square at 11:12 this morning, protesting against the radioactive discharges from the Sellafield plant. At 16:00 darkness had fallen – and the Norwegian tree, officially lit yesterday, was still dark (and crowding with Santas).

Published on December 7, 2001 by Runar Forseth 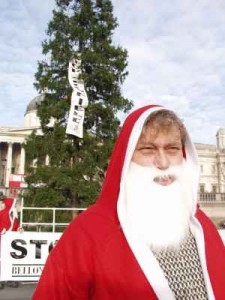 Fully equipped with climbers’ security gear, two activists climbed the tall Christmas tree at Trafalgar Square this morning, hanging out banners with the message "Stop Sellafield". The two intend to remain in the tree for as long as possible.

A member of the ground team, Bellona President Frederic Hauge stated, "every year at Christmas time Norway gives a tall tree to the English people. In return Norway receives huge amounts of radioactivity from the Sellafield nuclear plant in England, contaminating our Arctic seas."

Scientist have measured an alarming increase in levels of radioactive techetium-99 in sea weed and shell-fish since 1994, when Sellafield dramatically increased its discharges of the compound to the Irish Sea. Technetium-99 has a half-life of 211,000 years, and hence accumulates in the nutritional chain. Now, the British are planing to increase the discharges even further.

"To save some lousy pounds, the British have chosen to keep up a pollution discharge that nobody knows the consequences of. What we do know for certain, is that we’ll have to live with those consequences for posterity", Hauge said.

Coincidentally, Camvista.com has put up several webcams at Trafalgar Square. If you’re lucky, you’ll see some of the activists. 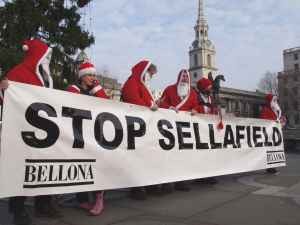