Dmitry Rogozin, Russia’s colorful deputy prime minister, has again made headlines by claiming the country will build a series of advanced nuclear icebreakers that have long been considered a mere fantasy.

Published on January 3, 2018 by Charles Digges

Dmitry Rogozin, Russia’s colorful deputy prime minister, has again made headlines by claiming the country will build a series of advanced nuclear icebreakers that have long been considered a mere fantasy.

Speaking to Tass, the official state newswire, before the end of the year, Rogozin said that Russia would build three Lider class nuclear icebreakers between 2023 and 2025, which would make navigation for commercial traffic in the Arctic possible all year long.

These new icebreakers, dubbed project 10510, would follow on three other
nuclear ice-traversing vessels that Russia is already building to the tune of nearly $2 billion a piece: The Arktika, the Sibir and the Ural, the hulls for two of which have already been floated at the Baltic Shipyard in St Petersburg – and which were until recently billed as the biggest icebreakers ever. 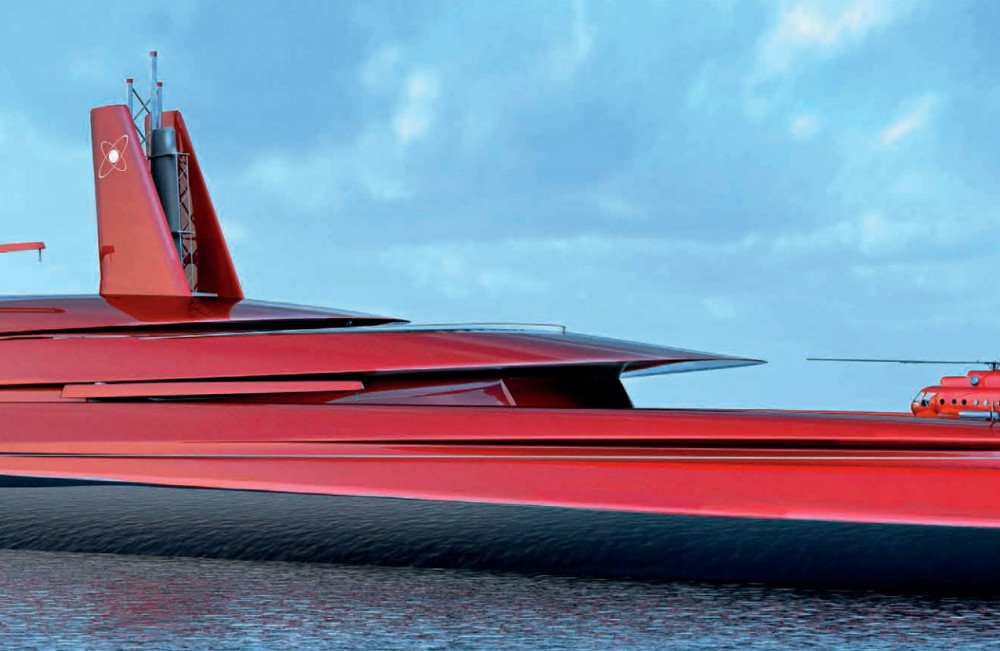 But the Lider will be even bigger. Mention of the Goliath vessel — whose name is a riff on the English word leader — first appeared in 2015, when the United Shipbuilding Corporation featured its space age design on its cover, piquing awed speculation among Russian nuclear industry watchers.

The magazine featured a mock-up of the streamlined vessel, from the point of view of a landing helicopter, steaming through islands of fluffy ice like an oligarch’s prized yacht. An article inside sketched out its massive dimensions, giving it a deadweight of 55,000 tons, and a length that was 50 meters longer even than the icebreakers Russia is building now.

The Lider would also be able to ride its as-yet-to-be-developed RITM-400 reactors through five meters of ice, and cut a swathe for following ships measuring 50 meters wide. Certain specifications in its hull design would also make it far more agile in the water than its older cousins.

Rogozin, who takes a swashbuckling view of Arctic development, immediately seized on the Lider project, becoming its most ardent booster at a time when Russia’s dour economy can barely afford to keep its old icebreakers afloat. For Rogozin, a man who once advanced Moscow’s claim on the Arctic by turning up in Norway’s Svalbard Archipelago without a visa and waving a Russian flag, the Lider’s fanciful dimensions seemed a good fit.

Meanwhile, new legislation seems to have granted Rogozin’s wish.  Last month, Russia’s state nuclear corporation Rosatom drafted a bill that would give it total charge of taming the country’s 6,000- kilometer long Northern Sea Route. This control would mean Rosatom also has say-so over which ships are allowed to sail through the corridor, and would designate the circumstances under which they have to travel with icebreakers in convoys.

Should the bill pass — and President Vladimir Putin indicates he expects it to — Rosatom will be given authority to oversee and regulate shipping through the Russian Arctic, as well as designate, build and manage ports along the way.

Predictably, Rosatom’s new grasp on power has pushed a number of more extravagant nuclear projects from their dim drafting tables and into the limelight. The Lider is chief among these.

Another rendition of the Lider icebreaker released by Rosatom.

In his remarks to Tass, Rogozin spoke in characteristically expansive terms: These three new icebreakers, financed by Rosatom, would make the Northern Sea Route passable all year round, he said.

Further, Russia “will be able will be able to lead whatever vessel for any customer traversing the Northern Sea Route: caravans with goods from Asia to Europe and we will be able to export our hydrocarbons in the form of liquefied natural gas not only to Europe but also to Southeast Asia.”

Yet where these extravagant new vessels would fit into Russia’s already full schedule of building new icebreakers is unclear. Less than a month ago,  reports emerged that Atomflot, Russia’s icebreaker fleet wants to build at least two more icebreakers on the model of the Arktika the Sibir and the Ural. These new icebreakers will all be put at the disposal of two natural gas projects on frozen Yamal Peninsula in the Kara Sea, Yamal LNG and the recently announced Yamal LNG-2 project.

Whether this gas project will take off is unclear. The original Yamal project survived only because of a $12 billion cash infusion from China once western sanctions threatened to derail it. But with Rosatom soon to be running the show in the Arctic, the new Lider icebreakers, whose costs have yet to be reckoned, seem to be on the way whether anyone needs them or not.