What can Russia learn from its flashy new nuclear icebreaker push?

Russia last week held a launching ceremony for a powerful nuclear icebreaker, called the Sibir, as part of its drive to cobble together a fleet for navigating the Northern Sea Route and hauling goods, particularly natural gas and oil, to Asian markets.

Published on September 28, 2017 by Charles Digges 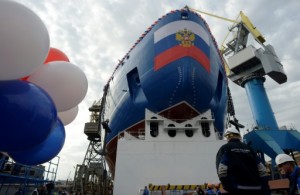 The hull of the Sibir as it rolled out of the Baltic Shipyard. (Photo: Rosatom)

Russia last week held a launching ceremony for a powerful nuclear icebreaker, called the Sibir, as part of its drive to cobble together a fleet for navigating the Northern Sea Route and hauling goods, particularly natural gas and oil, to Asian markets.

The massive $1.8 billion vessel built to replace an older icebreaker by the same name is part of Russia’s new line of LK-60 universal icebreakers, which are capable of riding two nuclear reactors through ice three meters thick at sea, but have a shallow enough draught that they can navigate the Arctic’s river tributaries.

For more than a decade, Russia has hung high hopes on a natural gas bonanza brewing on the Yamal Peninsula, which juts like finger north from Western Siberia into the icy Kara Sea. The multinational, $20 billion project run by Russia’s Novatek, is expected to reach operational capacity this year, and in a morbid gamble, it’s counting on climate change to clear more ice from its windswept Arctic shores.

Until the worst of global warming turns the region into a temperate resort, Russia is banking on icebreakers to help it deliver supplies to Yamal – a region icebound and without sun nine months out of the year – and to bust ice for convoys carting out an annual 16.5 million tons of its liquefied natural gas to Asia.

But what place new icebreakers have in this scheme was cast in shadow earlier this month when Atomflot, Russia’s nuclear icebreaker port, decided to decommission the Sovietsky Soyuz, a prized vessel whose work supporting oil and gas projects dried up after the West levied sanctions on Russia in 2015 for annexing Crimea.

The biggest casualty of those sanctions was a $500 billion Arctic oil drilling project inked by Russian state oil company Rosneft and ExxonMobil, which has now been shelved indefinitely. They also threatened to eat into the Yamal project as well, but Russia salvaged that by talking China into a $12 billion bailout last year.

Shortly thereafter, however, Royal Dutch Shell and ConocoPhillips abandoned $2.5 billion worth of oil drilling rights in the Russian Arctic after crude prices fell off a cliff. The going rate of $30 to $40 a barrel, the companies said, just wouldn’t pay their Arctic bills.

Yet Moscow has advertised the new icebreakers as the just the cowboys it needs to tame its wild Arctic frontier. Russia has long hoped to turn the little travelled Northern Sea Route into an oceanic superhighway between Europe and Asia that will rival the Suez Canal – the new vessels carving crucial infrastructure and welcoming ports out of the unforgiving ice along the way.

Still, it’s a delicate set of political and economic unknowns on which to pin a revival of the great Soviet nuclear icebreaker fleet – and the names of the new vessels leave no doubt that this is precisely the hope. 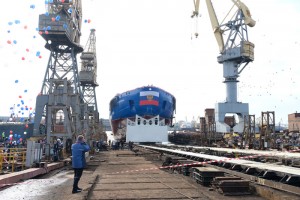 The Sibir's hull sliding down a gangway at the Baltic Shipyard. (Photo: Rosatom)

The Arktika – which was floated last year and is expected to be commissioned in 2019 – replaces its eponymous older brother. That Arktika is awaiting dismantlement at the Nerpa shipyard near Murmansk. The Sibir, likewise, replaces an older Sibir that has been relegated to the scrapyard. The new one will be commissioned in Murmansk in 2020. Only the Ural, whose construction started last year, will sail under an original name. It’s slated to take to the water in 2021.

The new ships are aiming for grand scale as well, surpassing in size and power the 50-Let-Pobedy, for years the nuclear icebreaker fleet’s crown jewel. The Arktika and the Sibir are each 50 meters longer that a soccer field, beating out their aging uncle.

In one such instance, a Ukrainian company called TurboAtom backed out of producing a critical turbine for the Arktika after Russian forces invaded the country’s east. Rosatom then entertained a bid from Kirov Energomash, a Russian manufacturer, but that got frayed because the Baltic Shipyard, which is building the ships, is suing the company over other delays. The nuclear corporation then turned to a General Electric subsidiary in England, but that was thwarted when the EU levied sanctions against Russia over the Crimean debacle.

Finally, as of this week, Kirov Energomash announced it was back on board to build the turbine, and said that it had completed tests on its functions.

The hassles have come with a cost and have bruised confidence. Vyacheslav Ruksha, Atomflot’s general director complained in February that the sheer number of disparate contractors toiling on the vessels was only tripping them up on the way to the finish line – which led to a disorganized round the clock sprint to push the Artika’s hull out the door.

Meanwhile, delays have become so entrenched and regular that it’s hard to keep track of when the boats are actually supposed to enter into service. As bands, bigwigs and selfie-snapping crowds gathered in St. Petersburg last Friday to watch a bottle of champagne burst on the Sibir’s bow, it was easy to forget it had already been under construction since 2015.

And it’s worth remembering that the hulls of the Sibir and Arktika, are still useless for much else besides floating expensively at the docks of the Baltic Shipyard. According to Andrei Zolotkov, an icebreaker expert with Bellona, the boats are at this stage largely unadorned by the technology that makes them nuclear icebreakers. That all comes much later.

In the meantime, earlier hopes of the icebreakers guiding convoys of cargo through the European-Asian passage through the Arctic seem to be dwindling. Atomflot’s Ruksha last summer hinted at a departure from that official line last summer when he insisted at a conference that their main purposes was to assist oil and gas drilling.

So far, the numbers point to poor traffic – and it may be the icebreakers that are to blame. To make the trip, ships have to present the Russian Federal Administration of the Northern Sea Route with Polar Code certification. If they don’t have it, and most don’t, they have to hire an icebreaker to lead them through.

There haven’t been many takers. In 2016, only six vessels made an icebreaker accompanied trip through the entire 6,000-kilometer west-east stretch of the Northern Sea Route. When 50 vessels pass daily through the route’s only competitor, the Suez Canal, this isn’t likely a contest Russia will win.

Were traffic is up, say Russian experts, is in voyages within the route itself, shipping from Northern Siberia to Asia and Europe. And it’s here that the icebreakers could still find a secure niche.

But some of Russia’s biggest gas customers are already building ice class freighters of their own to beat the icebreaker tolls. Daewoo in South Korea is constructing the $4.3 billion Christophe De Margerie line to bring liquefied natural gas home from the Yamal Peninsula. The first of these ships made an inaugural voyage in August, steaming from Norway to Asia, and reportedly made much of the trip with no icebreaker escort at all.

For shippers, that might be a good thing: Shortly after Russia began building the new line icebreakers, Atomflot contracted them nearly exclusively for use by the Yamal project for the next 20 years. In that sense, the icebreakers almost seem to be creating their own competition. By tying them up with supply runs to uncertain oil and gas projects, Russia seem to be telling its gas customers to build their own boats.

In the end, buffeted by the uncertainties of oil prices and hostage to the political brawls Moscow is constantly fighting with the West, the biggest lesson in the new icebreakers may be in planning for their obsolescence. And here again the newly floated Sibir leads the way.

The older icebreaker of the same name has become the first-ever nuclear icebreaker to undergo dismantlement, providing a cadaver’s tour of how to decommission and dismantle the rest of the fleet when the time comes – knowledge that will come in handy as Russia’s older icebreakers ­– the Sevmorput, Yamal, 50-Let-Pobedy, Taymyr and Vaygach – steam toward retirement.

But the price of that lesson – building the new icebreakers to tear them down – might be more than Russia can afford.