Norway and Russia: Nuclear breakthroughs in the Arctic – and the plight of ‘foreign agents’

TROMSØ – Russian and Norway this year mark 20 years of cooperative efforts to bring the former Soviet Union’s Cold War nuclear legacy in the Arctic to heel. Some €250 million later, both sides assessed what’s been done and what remains at the Arctic Frontiers forum in Tromsø.

TROMSØ – Russian and Norway this year mark 20 years of cooperative efforts to bring the former Soviet Union’s Cold War nuclear legacy in the Arctic to heel. Some €250 million later, both sides assessed what’s been done and what remains at the Arctic Frontiers forum in Tromsø.

Ingar Amundsen, head of the NRPA, said that two decades ago there was little verifiable information and a lot of rumors about Russia’s nuclear issues. In 1997, Norway was one of the first countries to approach Russia with the notion of cooperating on verifying and eliminating radiological threats. In 2003, the Group of Eight and other countries joined in with the goal of reducing radioactive threats, enhancing safety and preventing nuclear smuggling.

“Accidents at nuclear power plants showed contamination doesn’t respect borders,” Amundsen told the gathering. “It can spread to countries far from the accident.”

To Ole Andreas Lindeman, Norway’s consul in Murmansk, the nuclear cooperation with Russia is a history of success.

“Russia is Norway’s closest neighbor,” he told the forum. “Therefore, an important part of that cooperation is dealing with reactors, enhancing the safety of nuclear submarine dismantlement, and dealing with radioactive waste and spent nuclear fuel.”

The 20-year anniversary of this cooperation coincides with several of its more important goals, for instance; finally removing spent nuclear submarine fuel from the notorious Andreyeva Bay. 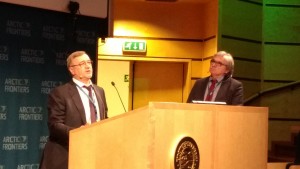 Anatoly Grigoriev, head of international programs for Rosatom, said 12 countries had contributed to nuclear safety programs in the Russian Arctic. But Norway, he said, has played a leading role.

“All nuclear installations in the Murmansk Region are currently safe and intended for work to make them more safe,” said Grigoriev.

He said Russia needed another 7 to 8 years to remove every last bit of the Cold War legacy from Russia’s Arctic Kola Peninsula, principally 22,000 spend nuclear fuel assemblies – the equivalent of 100 submarine reactors – from Andreyeva Bay.

“It’s rewarding that over a few years this catastrophe waiting to happen will disappear from our region,” said Yelena Tikhonova, Murmansk’s minster for economic development.

Among other potential nuclear threats in the region, Grigoriev noted, were nuclear icebreakers, spent nuclear fuel aboard the Lepse nuclear service ship, and the Grenikha base, which handles fuel from liquid metal cooled reactors aboard submarines.

The role of civil society and NGOs

Consul Lindeman singled out the close cooperation between Russia and Norwegian regulatory structures, and the contribution of groups like Bellona.

“I’d like to note the contribution of Bellona to adding these complex programs to the international agenda,” Lindeman said. “However, all Russian offices of the organization have been declared ‘foreign agents.’ The organization works only for the good of our countries, and it will be sad if Bellona can’t continue its work.”

Since the foreign agent law came into force in 2012, it has bled Russia of more than a third of the nonprofits operating there.

Tikhonova likewise noted the contribution of NGOs to nuclear safety in Russia’s Arctic.

Nils Bøhmer, Bellona’s general director, said it was Bellona that inserted issues of Russia’s ailing nuclear Arctic into international conversation in the first place – which attracted billions of dollars in international funding to stem the problem.

He emphasized that Bellona had published seminal reports full of verified information on Russia’s nuclear ailments, and brought their discussion to an international arena, where governments and NGOs could discuss them transparently.

”They naively suggested that we’d solve all the problems in three years,” he told the gathering. He’s still at it 24 years later. He took aim at the Russian Justice Ministry’s labelling of Bellona’s Russia offices as ”foreign agents.”

”Both of our offices in Russia have been put on the roster of foreign agents because theu receive foriegn financing and allegedly engage in ’political activity. But in any civil action, if you’re looking for it, you can find political content, otherwise it wouldn’t be a civil society organization,” said Bøhmer.

”In the battle with any environmental problem, it’s important to correctly evaluate solutions, and not just those that are cheapest. To find the most appropriate decisions, you need the input of independent experts,” he said.

Bøhmer presented an example: In 2015, Russia’s Justice Ministry listed Bellona Murmansk as a foreign agent. A few months later, Rosatom jointly held a seminar with Bellona Murmansk. So, an organization that the government considers a foreign agent is still indespensible to it because it has an independent, sometimes opposite opinion.

”It’s critically important for NGOs to be able to speak their opinions,” said Bøhmer. ”We are now seeing that under the pressure of this law, many NGOs are abdicating thier constructive criticism and positions just because it’s easier for them to stay off the foreing agent list. Projects will suffer as a result.”

Bøhmer said he was optimistic in 1993 to think he and Bellona would be able to make a dent in Russia’s nuclear issues. Nearly a quarter of a century later, he’s paid a visit to Andreyeva Bay.

”This speaks to the level of trust for Bellona, and its years of work with Rosatom,” he said. ”For an NGO, it’s very imporant to stick to constructive, even critical opinions, and to suggest its alternative solutions.”