Published on March 1, 2016 by Charles Digges

But, rather than boost business along the fabled Arctic shipping lane, climate change, say experts, would actually take a bite out of far north cargo deliveries before the new icebreaker has a chance to prove its stuff.

The Arktika was due to hit the water at the Baltic Shipyard in St. Petersburg in December, but a bitter cold-snap that month, which plunged temperatures to minus 20 C, made the installation of sensitive technologies impossible, according to Russian language reports from Yamal-Region TV in Northwest Siberia, where the Arktika will do most of its work. 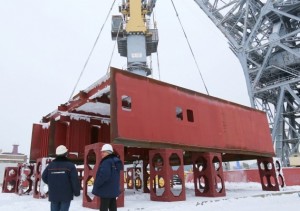 Part of the Arktika's superstructure being positioned. (Photo: Baltic Shipyard)

The Unified Shipbuilding Corporation is building the Arktika on a government tender price of 85 billion rubles, or $2.3 billion in 2013, at the time the contract was inked.

The newer, larger Arktika is a prototype for two more large-scale LK-60-type icebreakers. One of them, the Sibir, began construction in May 2015, and is scheduled for delivery in 2019. The third is due in 2020 and both were negotiated for the same price as the Arktika.

Arktika’s main business will be oil

The Arktika will be delivered to the state run icebreaker port at Atomflot in Murmansk. But the vessel is built to navigate both Arctic seas and their river tributaries.

It will be used to assist other ships carrying hydrocarbon products from fields in the Yamal and Gydansk Peninsulas and from the Kara Sea shelf to market in the Atlantic and Pacific oceans, said b-port.com.

But environmentalists have questioned whether such heavy, expensive nuclear machinery like the Arktika and its nascent cousins are necessary at a time when cargo transports through the Northern Sea Route are clearly nose-diving in comparison to the Suez Canal.

According to documents provided by the Northern Sea Route Transit Office, the amount of cargo hauled along the corridor’s approximate 5,600 kilometer length reached its heyday in 2013 at 1.3 million tons – most of it minerals and hydrocarbon products.

But in 2014, cargo statistics dropped of a cliff to a mere 274,000 tons. The Northern Sea Route Office hasn’t yet posted any concrete figures for 2015. 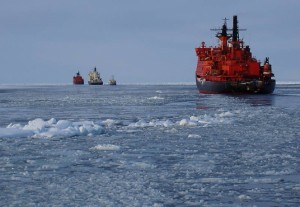 Russia had previously boasted the Northern Sea Route, on which the government commands a heavy toll for mandatory icebreaker accompaniment, would displace the Suez Canal as the East-West route of choice.

Aleksander Olshevsky, head of the Northern Sea Route Administration, was quoted by the Russian Proved website as attributing the loss in cargo tonnage along his route since 2013 to unresolved price haggling between mining operations and their customers over transport costs.

But Bellona’s Sirgurd Enge, an adviser on the Arctic and Shipping and Marine Management didn’t buy that the 80 percent drop off in cargo tonnage was due to a couple of customers sitting the shipping season out.

Using the Northern Sea Route shaves only about 24 percent off the distance via the Suez Canal between Rotterdam and Hong Kong – and the weather far more predictable.

Such ice floes aren’t dangerous to icebreakers, said Enge, but they could turn the boats they are escorting – laden with heavy fuel and hydrocarbon products – into hundreds of little Titanics.

It’s come close to happening. The Nordvik ice-class tanker in 2013 hit an ice floe north of the Taimyr Peninsula and began taking on water and threatening to spill tons of diesel fuel into the Arctic ecosystem while it foundered for a week at sea. 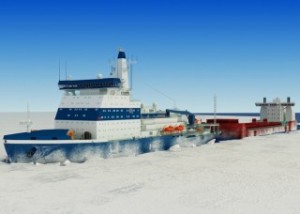 Another ice class tanker was dispatched to unload the Nordvik’s fuel and tow it to port under escort by the Vaygach and the Taimyr nuclear icebreakers, which after days of receiving distress calls, finally broke free of escorting a vanity mission through the Northern Sea Route by the Russian Navy’s flagship vessel.

That the Nordvik was sailing without icebreaker escort in the first place was a major violation of Northern Sea Route regulations, said Enge, and a glaring example of how poorly developed the route’s oversight and infrastructure are.

It could be argued that the new icebreaker class will help alleviate some of these dangers by offering more escorts and by supplying rescue infrastructure to Russia’s far flung northern ports.

“The Arktika is a new nuclear vessel running the RITM-200 reactor, and if anything goes wrong with it, there’s virtually no infrastructure up there that can handle it,” he said.

And the vessel’s intended purpose of running oil and gas tankers in and out of the Arctic doesn’t square with international emissions slashing goals arrived at by 190 nations during the Paris Climate Summit.

And tapping Arctic reserves, said Enge, was nothing but expensive guesswork.

“It’s speculated that the Arctic holds huge hydrocarbon reserves,” he said. “But bringing Arctic hydrocarbons to market would produce some of the most expensive gasoline ever – no one would be excited about that when oil is currently cheap and plentiful anyway.”