Russian has announced $58 million of infrastructure development for the Chukotka region for Russia’s first-ever floating nuclear power plant, according to the nuclear.ru Russian news portal.

Published on January 14, 2016 by Charles Digges

Russian has announced $78.5 million of infrastructure development for the Chukotka region for Russia’s first-ever floating nuclear power plant, according to the nuclear.ru Russian news portal.

Though Andrei Zolotkov, a nuclear adviser to Bellona, said the cost of the infrastructure in Chukotka was not a surprise new expense, the floating nuclear power plant project has been controversial since the beginning due to its ever-growing $750 million budget.

But the new infrastructure costs in Pevek, said Zolotkov, are not part of the famously ballooning figures associated with Russia’s first floating nuclear plant 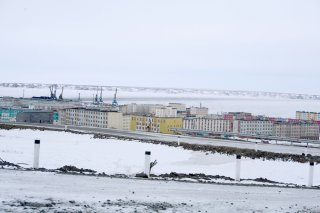 “This hydro-technical and shore equipment for the floating plant was foreseen in the original designs,” he said. “It’s a part of the project which wasn’t among the first steps and in various ports the costs would change, so this construction is specific to the area.”

Russia’s first floating plant, the Akademik Lomonosov is tentatively scheduled for delivery the port if Pevek in Chukotka this year, though some officials with Russian state nuclear corporation Rosatom have cast doubt on that optimistic completion date, saying it would be delivered closer to 2019.

And even if it were completed this year, the tender for the infrastructure project won’t be complete until February this year, and its construction is projected to last, coincidentally, until 2019.

The onshore infrastructure will include temporary buildings and other constructions, a pier, the dredging of a waterway and space in which to maneuver the floating plant, and various fortifications to protect the shoreline.

According to nuclear news, the shore infrastructure will be build to hold the floating nuclear plant in position as its mooring “in the most extreme external circumstances that repeat themselves one every 10,000 years.”

The new floating plants that will be built by Russia, said Zavyalov are expected to be smaller and require less time to build in an effort to sidestep the difficulties that have plagued the construction of the Akademik Lomonosov.

The Akademik Lomonosov has been beset since the beginning of construction in 2006 by upwardly spiraling costs – which in May of last year had reached $750 million – and even a change of shipyard.

Its construction initially began at Sevmash in Northwest Russia, but in 2009 was moved to the Baltic Shipyard amid whispers that money was being siphoned off the project to complete Sevmash’s defense contracts.

In St. Petersburg, the FNPP’s fate became ensnared in bankruptcy proceedings against the Baltic Shipyard. Russian United Shipbuilding Corporation bought up the shipyard in May 2011, and the build continued.

Rosatom told the Russian daily Kommersant that the rocky history of trying to get the Akademik Lomonsov on the water is a result of the vessel being, again, “experimental.”

Kommersant’s anonymous sources at Rosatom told the paper to realistically expect the Akademik Lomonosov’s plug-in to the grid at Pevek as late as 2021.

Touting the smaller plant designs for the future, Zavyalov said the power range of these new, stripped down floating nuclear plants, would be in the 200-500 megawatt range, far outpacing the 70 megwatt capacity of the Akademik Lomonosov’s two reactors.

A source within Rosenergoatom – Russia’s nuclear reactor builder – told Kommersant that new reactors would have to be designed to meet this high capacity.

Zavyalov estimated the time to build the new compact FNPPs would be reduced by 40 percent of the time it’s taken to deliver on the Akademik Lomonosov. He added the smaller models could be produced “essentially conveyor belt style.”