Published on September 1, 2015 by Charles Digges 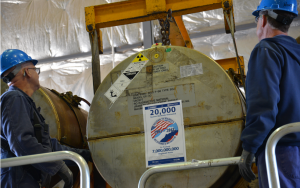 The final shipment of downblended uranium under the Megatons to Megawatts program lands in the US. (Photo: Courtest of centrusenergy.com

Mikerin, 56, of Chevy Chase, Maryland, who is already being held in a federal prison in Washington, DC, long denied the claims until mid August, when he agreed to enter the guilty plea he submitted on Monday. As part of the plea agreement, Mikerin agreed to turn over the bribe money to US officials, the US Department of Justice said Monday. 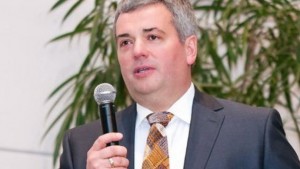 Vadim Mikerin pleaded guilty more than $2 million in bribes for non-competetive contracts to send reactor grade uranium to the US via the Megatons to Megawatts program. (Photo: Tenam USA)

While managing Tenam USA, the US subsidiary of Tenex, Rosatom’s nuclear fuel producer, prosecutors said he orchestrated a scheme to assure certain US firms were awarded contracts to transport downblended uranium to the US in return for bribes, according to publicly available documents from the FBI.

Mikerin admitted to disguising about $2,126,622 in bribes as consulting fees and other fake expenses, and sending the money to bank accounts in Cyprus, Latvia and Switzerland, the Justice Department said.

Mikerin also admitted that he and others used code words such as “lucky figure,” “LF,” “cake” and “remuneration” to disguise the corrupt payments, according to the Justice Department.

The transports of downblended weapons grade uranium from Russia for use in American commercial reactors were apart of a joint disarmament agreement between Moscow and Washington dubbed “Megatons to Megawatts,” which ran between 1993 and 2013.

The program supplied 10 percent of America’s electricity for 20 years. 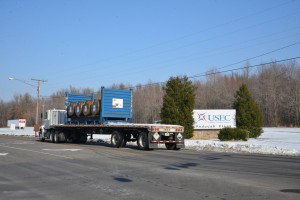 Attorneys with the US Justice Department said in court on Monday that the payments made by US entities in exchange for non-competitive contracts were made between 2004 and 2014, and were in violation of the US Foreign Corrupt Practices Act.

Those who had made the payments were not identified during the court hearing, according to Agence France Presse. But the Justice Department pointed to a Maryland transport firm and two Ohio companies, now merged, involved in making pressure vessels for the nuclear industry, and to American individuals linked to the companies.

Boris Rubizhevsky, 64, of Closter, New Jersey, and Daren Condrey, 50, of Glenwood, Maryland, pleaded guilty in June in connection to the probe, the Justice Department said.

The FBI documents singled out Condrey as a principle in Maryland’s Transport Logistics International. The company paid bribes in exchange for non-bidding contracts to transport the uranium for a windfall of $33 million, according to the FBI.

Rubizhevsky, had earlier admitted he’d used his security firm Nexgen as a go-between for Mikerin and Transport Logistics International, said the Justice Department.

Mikerin is expected to be sentenced in December, and could, according to earlier reports by the Wall Street Journal, face as many as 28 years in prison.

The two other men involved in the scheme are scheduled for sentencing separately in October and November, the Justice Department said.

Rosatom issued a statement earlier this year saying it would fully cooperate with any US investigations, and added that other officials with the state corporation were not involved in the misconduct.

Mikerin is not the only official from Russia’s state nuclear corporation to be netting by US officials for defrauding US-Russian disarmament agreements.

In 2005, that corruption reached the upper echelons of Minatom, Rosatom’s predecessor company, when its head, Yevgeny Adamov was arrested by Interpol in Switzerland. 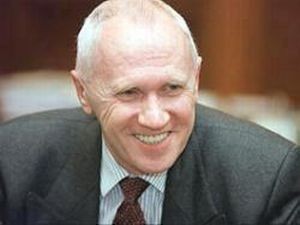 The US warrant through Interpol accused Adamov of swindling $9 million in US aid for nuclear safety upgrades in Russia.

Russia countered the US extradition request for Adamov immediately, charging him with graft in his home country.

A Swiss court, fearing the arbiter of Russia’s nuclear secrets might be tortured in American hands, sent him to stand trial in Russia. He was found guilty and, due to his age, received a 5-and-a-half-year suspended penal colony sentence.