Published on October 28, 2014 by Charles Digges 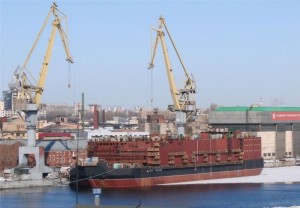 The Akademic Lomonosov at the Baltic Shipyard. (Photo: Topwar.ru)

The announcement is one Alexei Kadilov, General Director of St. Petersburg’s Baltiisky Zavod shipyard, said the Akademik Lomonosov told a press briefing that construction was so far along that issues of loading its two 35 megawatt reactors with fuel for tests have been solved, RIA Novosti reported (in Russian).

Kadilov’s press briefing was one of the first indicating the floating nuclear plant will, in fact, roll out of construction and be put to use since 2012, when contract delays, bankruptcy proceedings, and switching shipbuilders conspired to sink the plant’s launch by several years.

Many environmentalists had at that time hoped the pile up of financial failures and hastily proposed reschedulings of the 9.98 billion ($239 million) plant’s launch spelled its extinction as another Soviet-style anachronism.

The Akademik Lomonsov’s keel was initially laid at the Sevmash shipyard in Severodvinsk, where it’s expected release date was scheduled for 2010. And then later that was bumped back to 2011.

A backlog of military contracts at Sevmash forced Russia’s state nuclear corporation to move the construction project to the Baltiisky Zavod shipyard in 2008.

The transfer did not take come off without a whiff of scandal – not only was Sevmash overrun with military contracts, but a source from Sevmash told Bellona at the time that money the shipyard received the floating nuclear plant’s construction was being siphoned off to ease the traffic jam of military contracts.

After moving the floating nuclear plant to Baltiisky Zavod in 2008 Rosatom signed a contract for its completion in 2012. A flurry of bankruptcy proceeding against Baltiisky Zavod threatened again to delay or even scuttle the project altogether.

But the state-owned United Shipbuilding Corporation acquired the shipyard in 2012 and a new contract with Baltiisky Zavod-Sudostroyeniye, the successor of the bankrupt namesake, was signed in December 2012, World Nuclear News reported.

“We are today on schedule, and I think that everything that depends on us will be done and in September 2016, the installation will be ready for transport,” Kadilov told reporters. “We’ve coordinated all questions of loading the fuel and with tests with the Governor (of St. Petersburg) – there are now very strict requirements for nuclear safety and we have no doubt that all will go according to standards.”

The Akademik Lomonosov is slated to serve the Far East region of Chukotka and Kadilov said it would be positioned there by 2017 despite what even he admitted was an infrastructure that “lags far behind” to service the plants needs on the frozen peninsula.

The lack of necessary infrastructure as Kadilov points out, is exactly the reason for us to be skeptical against the whole concept with floating nuclear power plants,” Bøhmer said.

“These installations will be placed far away from technical knowledge which could be very handy to have in place if or when an accident happens, which could make the consequences much worse than they would otherwise be – we also fear that such installations would have less than adequate physical protection against theft and terrorist acts,” he said.

In all, Russia’s state nuclear corporation Rosatom wishes to produce six 70 megawatt floating nuclear power plants, which it says are designed to deliver power to far flung regions along its own northern Arctic and Pacific coasts. Rosatom insists the plants also have great use for powering port cities, large industry, and – in a double environmental horror – giving muscle to oil and gas platforms and refineries the Arctic.

Rosatom further says the plants are a hot item on the wish list of foreign customers, mainly China – which had been hoping Russia would meet its originally promised deadline of 2010 to deliver the Akademik Lomonosov.

… and the realities making them a ghastly idea

Environmental outcry over FNPPs has been present since their inception.

Aside from a critical lack of infrastructure to support them and the obvious fact that such plants are sitting ducks for motivated terrorists, there still remain elementary questions that would confront even land based plants – namely where to store their spent nuclear fuel, and, in the case of floating plants, how to even get that fuel tens of thousands of miles to safe storage facilities.