Published on October 17, 2014 by Charles Digges 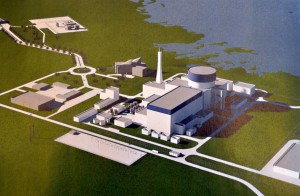 Another computer generated image of the Pyhäjoki plant and its VVER-1200 reactor. (Source: Fennovoima)

An early morning protest of the of Fennovoima nuclear power plant’s construction the Hanhiviki nuclear reactor in Pyhäjoki, Finland – 34 percent of which is owned by Russian state nuclear corporation Rosatom – was broken up by police at noon on Monday resulting in six arrests.

A total of nine activists, some of whom had bound themselves to one another with ropes and chains, blocked roadwork at the Hanhikivi construction site for most of the morning, Finnish broadcaster YLE reported.

They are said to have arrived with a larger group of protesters from Helsinki’s Hyokyaalto (Tsunami) environmental organization, which aims to continue disrupting road construction surrounding the plant.

Three police patrols responded. After police negotiations with protesters failed, six of the nine activists were taken into police custody. One of the demonstrators had to be transported in handcuffs after resisting arrest, YLE reported.

While the protest was in progress, Rosatom’s daughter company Rusatom Overseas and Atomstoiproekt, the construction wing of Rosatom, signed off on a contract in Moscow to draw up all engineering documents for the planned nuclear plant, located in Finland’s northwest coast, Russian media reported.

Rusatom Overseas and the Fennovoima consortium signed the construction contract for Hanhiviki-1 in 2013.

The Fennovoima plant has recently become a lighting rod of political jostling in the Finnish government as it tries to reconcile EU sanctions against Russia with allowing Rosatom to own such a significant portion of a national nuclear power plant.

Finland’s Green League left the government last month over the cabinets persistence in backing the nuclear build hand in hand with Russia. Though EU sanctions do not extend to nuclear deals, the Green departure was a vote of no confidence in Russia’s ability to deliver a safe product.

The Green League also forwarded an alternative energy strategy to make up for a loss in nuclear power, suggesting larger investment by the government in wind, bio-mass and solar power.

“The thing that has annoyed me most in this discussion is a certain attitude, even Russophobia, that has been evident in several speeches,” Stubb was quoted as saying by YLE during a debate on the project. “It comes from an attempt to stoke fears of Russia in our energy policy. It would be good to talk about energy as energy.”

Numerous MPs have fired broadsides at Stubb criticizing his blindness to the fact that Rosatom is a state corporation under the control of President Vladimir Putin and thus intrinsically tied to Russia’s geopolitical designs, YLE said.

No one taking part in the parliamentary debate mentioned the protest. The Hyokyaalto group is reported by Finnish media as being a direct-action grassroots confederation with a focus on protesting industry that contributes to global climate change.

“It’s good to see the Finns getting angered over this plant in the face of their prime minister characterizing opposition to it as ‘Russophobia,’” he said. “Instead, it must be acknowledged that the plant causes real safety concerns and inevitable cost overruns that will eventually fall into the laps of Finnish taxpayers.”

In the aftermath of the protest, Hyokyaalto issued a statement saying it hoped its demonstration had provided a reminder that the license for extending Fennovoima’s construction license has still not been decided. The activists declared their protest a success and promised more.

Sergei Yermeyev contributed to this report from St. Petersburg.