In the face of escalating hostilities between Russia and Ukraine – which have reached documented bloodshed and troop losses on both sides – Kiev announced it will more heavily rely on nuclear fuel imports from the US, and will move to build new nuclear power plants to accommodate non-Russian fuel.

Published on September 15, 2014 by Charles Digges 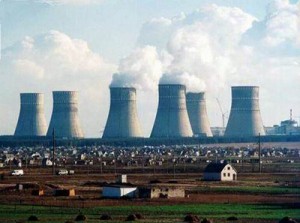 In the face of escalating hostilities between Russia and Ukraine – which have reached documented bloodshed and troop losses on both sides – Kiev announced it will more heavily rely on nuclear fuel imports from the US, and will move to build new nuclear power plants to accommodate non-Russian fuel.

The announcement dovetails with new sanctions imposed against Russia’s energy sector by the EU on Friday, primarily targeting the oil and gas giants Gazprom and Rosneft. The EU has also instituted travel bans against some of President Vladimir Putin’s closest associates.

Westinghouse, the Japanese-US atomic group that Ukraine says can make up its nuclear fuel deficits, seems to be hovering over the uncertainty like a vulture, and according the Financial Times, is simultaneously pressuring the EU to introduce competition rules that will break eastern Europe’s dependence on Russian nuclear fuel.

Yet documented failures of Westinghouse to produce safe fuel for the Soviet-built VVER-440 and VVER-1000 reactors powering Ukraine provide Russia with ample ammunition toward retaining its hold on the Ukrainian market.

Ukraine’s nuclear utility Energoatom told Reuters Friday that it plans to use US fuel for some nuclear power generation from 2015 and seek non-Russian investors for development projects in a bid to cut its dependence on Russia.

This announcement was shortly preceded by a declaration from Ukrainian Prime Minister Arseniy Yatsenyuk on September 3 that Ukraine will sign an agreement to build new nuclear power plants that are more conducive to using western manufactured fuel rods, according to World Nuclear News.

“The problem is that the [planned] units were designed according to Russian reactors,” Yatsenyuk said according to ITAR-TASS, an official Russian news wire. “But we are finding a solution and intend to sign an agreement on the construction of new units by the end of this year.”

With whom that agreement will be signed remains unclear.

As of January – well into the hostilities between the two countries – it was still Russia from which Ukraine intended to borrow the initial $6 billion for the new units.

On Friday, that deal hit the dirt, as confirmed by a statement issued by an Energoatom spokesman reading “The current state of Russian-Ukrainian relations does not allow us to count on state or export financing of this project from the Russian side in the near future.”

Technology can’t be judged through fog of politics

Alexander Nikitin, Chairman of the Environmental Rights Center (ERC) Bellona, said the current arguments over reinvigorating the nuclear fuel competition Russia and Westinghouse are, “In my opinion […] political rather than technological.”

He said a decision was only over the past few days adopted to hold discussions on this issue in the EU, and making educated guesses over the engineering and technology needed to deploy new fuels – to say nothing of new reactors – was impossible.

The battle over where Ukraine will gets its nuclear fuel has raged for some months as clashes between Kiev’s forces and pro-Russian separatists, aided by the Russian military in the country’s industrialized east are finally amounting to a body count acknowledged by Russian military units in Moscow.

Ukraine relies on nuclear power for some 50 percent of its energy needs, and that energy is supplied by 15 nuclear reactors at four plants, three of which are located well away from the fighting. All were built during Soviet times and ensuring a steady supply of fuel to them is essential to avoid catastrophe of another kind.

The major concern is that the four nuclear power plants are located in what is more and more coming to resemble a war zone. A new kind of crisis

The circumstances are largely unprecedented.

“There haven’t been many conflicts in states with nuclear power facilities in the past, so we’re really entering unknown territory here,” said Jeffrey Mankoff, Deputy Director of the Center for Strategic and International Studies’ Russia and Eurasia Program.

NATO has shown concern, sending a small team of civilian experts to Ukraine in April to advise the government on the safety of its nuclear infrastructure.

The fear driving this assistance is the long shadow of Chernobyl, which is located in Ukraine.

The closest nuclear power plant to the current fighting is Zaporizhiya Nuclear Power Station, which houses six reactors. And there are doubts that this, or any of the plants, could survive a military incursion.

German public broadcaster ARD, as quoted in The Washington Post, has warned that “a second Chernobyl disaster will be inevitable if the fighting in Ukraine cannot be stopped.”

Sergej Boschko, who heads Ukraine’s nuclear regulatory agency, told (in a German broadcast) on August 29 that “no nuclear power plant is protected against military attacks. They are not made for war, they are made for peace.”

And the problems don’t end with the plants. ARD further reports (in German) that 100 containers of spent nuclear fuel were found in open air storage less than 200 kilometers from the front line fighting in eastern Ukraine. Yatsenyuk evidently intends at the very least diversify Ukraine’s supply of nuclear fuel away from total dependence on Russia’s TVEL, the state manufacturer of an aggressor nation.

Enter Westinghouse, which after more than a decade of trying to gain a foothold in the Ukrainian market, signed a 2005 deal with Kiev’s Energoatom to supply fuel assemblies between 2011 and 2015.

But there’s a hitch: In 2012, during a routine inspection, Energoatom reported that Westinghouse’s assemblies had structural damage. It had to swap those for Russian-made fuel assemblies, which the utility estimated cost it $170 million.

After a suit threatened by Energoatom, Westinghouse tried to make good on its deal and produced modified fuel rods for the Russian built VVER-440 reactors. These, too, were found defective.

Indeed, Westinghouse has not fared well in other markets dominated by Soviet built reactors. In 2000, it began supplying nuclear fuel to CEZ, a Czech utility, for two reactors that it helped to modify at CEZ’s Temelin station. In 2009, Russian company TVEL took that business away.

Westinghouse said in August that it could reprise the production of the VVER-440 fuel with an investment of $20m. However, it warned that the process of providing alternative fuel would probably take more than two years to ramp up.

Whether that will be soon enough to suit Yatsenyuk remains unclear.

Russia continues to promise fuel with no strings attached

In March, Sergei Kiriyenko, head of the Russian state nuclear corporation Rosatom and the Kremlin promised that hostilities between the countries would not affect the steady supply of nuclear fuel coming from Russia.

“Before you start to create initiatives like sanctions, you should think a lot about the potential consequences of those decisions,” he continued in remarks to Reuters, in reference Westinghouse’s hardball jockeying at the EU.