ST. PETERSBURG – An internal order by the general contractor at the site of the Baltic Nuclear Power Plant, an embattled project under construction in Russia’s Kaliningrad Region, reveals personnel transfer and other drastic staffing and budgeting changes are in the cards for the fast-expiring venture, pending “mothballing.” Moscow, insisting on capacity revision, released a contradictory version of the same order within hours.

Published on June 4, 2013 by Maria Kaminskaya 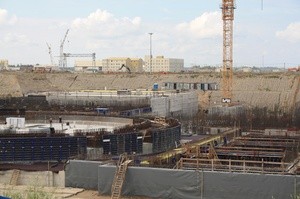 Issued by Valery Limarenko, head of the Nizhny-Novgorod-based NIAEP, an engineering company within the Russian State Atomic Energy Corporation Rosatom, the document orders a series of staffing and budgeting overhauls “in connection with the mothballing of the Baltic NPP and NIAEP budget adjustments for 2013.”

The Baltic Nuclear Power Plant (Baltic NPP) is a two-unit station Rosatom has been building in Neman in the Russian exclave of Kaliningrad Region, close to the border with the European Union.

NIAEP, which designs and manages construction of nuclear power plants, is Rosatom’s general contractor for the construction and operates a Baltic NPP branch in Neman.

Among other items, the order instructs NIAEP heads of departments to present a “staff number plan” on the Baltic NPP branch and St. Petersburg representative office, on a month-by-month basis and taking “relieving of personnel” from the site into account, as well as an “adjusted budget” for the Baltic NPP branch, on a month-by-month basis and taking the “upcoming mothballing” into account.

Based on these measures, NIAEP management are also instructed to present a month-by-month plan of redistributing the personnel relieved from work on the Baltic NPP project to NIAEP’s other construction sites, complete with budgeting amounts for costs associated with employment termination or relocation and employment at another workplace.

These and other instructions are to be fulfilled between June 10 to June 17.

However, a later report by Novy Kaliningrad pointed to a NIAEP press release issued within hours on Rosatom’s website which describes the same order, by the same date and same number, 40/484-P, and with what reads like many of the same instructions – but with different language for the cause of the staffing and budget changes.

It says Limarenko’s order was issued “in connection with expanding the range of capacities of reactor plants of the Baltic NPP and NIAEP budget adjustments for 2013.”

Rosatom’s version also does not have the item concerning costs associated with employee termination or transfer.

It also mentions an instruction to forecast budget fulfilment adjusted for the time required for the decision-making with regard to “additional siting at the Baltic NPP of reactor units of smaller capacity” – where the older version cited changes in the volume of work.

The Baltic NPP’s press secretary Inna Moreva, reached by Novy Kaliningrad for the update Tuesday report, was quoted by the news outlet as saying there was no mothballing issue, “we are working as we have been.”

As recently as late last March, an NIAEP press release quoted Limarenko as saying: “At the moment, the construction needs some 2,000 workers. By mid-year, 3,000 people should be working at the two units, and by the end of the year, 4,000.”

But latest developments indicate the Baltic NPP project is floundering at best, and a confusion suddenly erupting over contradictory versions of the same internal order – regardless of the actual situation at the site – seems to serve as another nail in the coffin for a project plagued from the start by strong public opposition, economic miscalculations, and failed hopes for partnership in Europe.

In late May, a subscriber-only report by the Russian news agency Interfax, which was then cited in numerous media stories, said Rosatom was considering reducing the future station’s capacity by more than three times – from 2,300 to 680 megawatts.

The earlier project for the primarily export-oriented station envisioned building two 1,150-megawatt VVER-1200 units. Concrete placement for the containment building foundation was completed last December at the site of the first reactor unit, and a core catcher – a device designed to catch the molten reactor core in case of a meltdown – was installed. A construction pit has been prepared for the second unit’s reactor building.

Media reports, citing Interfax, said Rosatom instructed a number of its enterprises to explore the possibility of “expanding the range of capacities of reactors” for the Baltic NPP – building units of smaller capacity first, and putting online the large-capacity reactors “upon the availability of contracts for consumption and a power delivery scheme.”

Kaliningrad Region’s obsolete and dilapidated transmission and distribution infrastructure, which prevents accommodating a large nuclear power plant into the region’s grid, and Rosatom’s failure to land any power export contracts are just two in a vast range of hostile factors that have consistently crippled the ill-devised venture.

Reports said 640- and 40-megawatt reactors were possibly under discussion. Rosatom’s older VVER design, VVER-640, and the KLT-40C, a design based on naval propulsion systems, are the likely candidates.

NIAEP and the nuclear operator company Rosenergoatom, responsible for construction management at the site, were instructed to “develop the unit launch priority order” taking into consideration that a decision may be made to build the smaller-capacity units on a first-priority basis, according to the cited Interfax report.

Neither of the designs is ready for construction, and updating project documentation can be expected to take no less than 18 months.

Still, on Monday, June 3, France’s Ambassador to Russia Jean de Gliniasty expressed confidence in France’s participation in the project as he observed the construction site in Neman during a one-day visit to Kaliningrad Region, a Rossiyskaya Gazeta story (in Russian) reported.

“This is impressive,” Ambassador de Gliniasty was quoted by Rossiyskaya Gazeta as saying. “French enterprises are participating in this project. Even though there are doubts regarding the project’s scope, the French enterprises will continue their cooperation. I hope the Baltic NPP will be a kind of a base for France’s presence in Kaliningrad Region.”

Rossiyskaya Gazeta cited the ambassador as pointing out during a meeting with Kaliningrad Region’s Governor Nikolai Tsukanov that even if the Baltic NPP project undergoes amendments, this will not affect the “implementation of the contract.”

Governor Tsukanov echoed by calling the Baltic NPP an economic project that “gives the region development in the form of new jobs and taxes,” Rossiyskaya Gazeta reported. But the governor also said that alternative energy development options are being researched for the region, such as enhanced gas deliveries.

The population of the currently energy-sufficient region has spoken overwhelmingly against the nuclear power plant in Neman in opinion polls.

According to Vladimir Slivyak, co-chairman of the Moscow-based ecological group Ecodefense!, the only contract that the French ambassador could have referred to is the cooperation Rosatom is working on with France’s engineering giant and leading turbine producer Alstom, which the nuclear corporation has approached for a partnership envisioning a deal to supply turbine generators for the Baltic NPP’s VVER-1200s.

Slivyak told Bellona in an email correspondence that attempts have been made by Rosatom to attract a loan for the turbine supply contract from France’s bank Société Générale against guarantees of the French export credit agency Coface. Both have yet to issue a decision on granting Rosatom’s loan request. Société Générale has said it is expecting its own experts’ evaluations of the Baltic NPP project before making a decision.

The Baltic NPP was also Russia’s first nuclear power plant project where a 49% stake in the future station was offered to potential investors abroad. Landing a foreign co-investor was a promise Rosatom made to have the project included into the Russian government’s nuclear construction plans in 2009. However, Rosatom’s attempts to woo European investment partners, energy consumers, or financial institutions for support of the Baltic NPP project have been rebuffed.

Earlier, according to Slivyak, the French bank BNP Paribas issued a written statement saying it would not participate in the project in Neman. Rosatom has been given a cold shoulder by other banks and energy companies it has courted in Europe – such as Italy’s Unicredit, which will also rely on its own experts’ review before making a decision, and Germany’s HypoVereinsbank, which turned Rosatom down in April.

Likewise, Kaliningrad Region’s closest neighbors Lithuania and Poland have refused to guarantee purchases of the Baltic NPP’s power or provide it access to European grids – a crucial failure for a project whose goal was predominantly exporting future power output to the European Union.

Environmentalists have mounted an extensive campaign against the project in Neman, playing a fundamental role in thwarting Rosatom’s efforts to secure funding or export deals in Europe for the Baltic NPP.

“The Baltic NPP project is in crisis and may be stopped for good – something one can only be glad for. Only the French ambassador is trying to save it for the sake of the French company Alstom’s turbine supply contract. He doesn’t give one hoot about Kaliningraders’ opinion, he cares nothing for the risk of a nuclear accident, nor for the future nuclear dump in Kaliningrad. All he cares about is the money,” said Ecodefense!’s Slivyak.

“Ecodefense asks representatives of France not to bother themselves and save their breath. Let the Baltic NPP die in peace,” Slivyak said.