Mayor of Fukushima-devastated town: Say no to nuclear energy

SOSNOVY BOR, Russia – Katsutaka Idogawa, mayor of Futaba – a town closest to the destroyed nuclear power plant (NPP) Fukushima Daiichi and which was permanently evacuated following the nuclear disaster there in March 2011 – appealed to his counterpart in Sosnovy Bor, the town which is home to Leningrad nuclear station, near Russia’s second largest city of St. Petersburg, urging him to say no to nuclear energy and not let the nuclear industry compromise the future of his town, the future of his country, and the lives and health of his citizens.

Published on May 23, 2013 by Andrey Ozharovsky, translated by Maria Kaminskaya 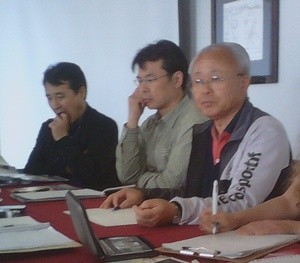 Futaba mayor to mayor of Sosnovy Bor: I urge you not to repeat my mistakes

Mayor Idogawa’s letter to Vladislav Golikov, mayor of Sosnovy Bor – where four aged reactors of the type that was used at the infamous Chernobyl NPP in Ukraine remain in operation and two new reactors are being built of a design that is yet to be tested anywhere in practical experience – was written while on board of the Peace Boat during the Peace Boat Onboard Conference for a Nuclear Power Free World and was made public on Idogawa’s request on the day of the vessel’s call in St. Petersburg, on May 18.

My name is Katsutaka Idogawa. At the time of the Fukushima Daiichi Nuclear Power Plant accident, which resulted in a radiation catastrophe, I was the Mayor of Futaba, the town closest to the Fukushima Daiichi plant. I write this letter to you, the Mayor of Sosnovy Bor, the town closest to the Leningrad power plant, as someone who has had a similar mandate and responsibility to his constituents.

I would like to caution you against making the mistakes I did, which I greatly regret.

In 2005, I became the Mayor of Futaba, a town in which the Tokyo Electrical Power Company (TEPCO) had already built a nuclear power station. I had great trust in the vision and statements of the nuclear industry, which told me that a nuclear power plant would work well and bring happiness and prosperity to my town.

It is now apparent that this vision was a lie. A terrible catastrophe began at the Fukushima Daiichi reactor on March 11, 2011. Later there were explosions at 3 nuclear reactors and radiation accidents at 4 spent fuel basins. The level of radiation in my town has since risen tremendously. Radiometres by my office window have registered radiation levels that were off the charts. There was no information on how to proceed – neither from the power plant, nor the government – and so, I took the decision to evacuate the residents of Futaba town. I hope that you will never be in the position to have to evacuate residents of Sosnovy Bor because of a radiation accident at Leningrad Nuclear Power Plant or Leningrad Nuclear Power Plant Two, which is currently under construction.

The residents of Futaba, myself included, have had to leave our town because of the radiation catastrophe. We have been displaced and abandoned.

I urge you to not repeat my mistakes! Do not let the nuclear industry compromise the future of  your town, the future of your country as well as the lives and health of your citizens.

There is a Japanese proverb which states that everything happens in threes. Three serious radiation accidents have already taken place: at Three Miles Island NPP (USA, 1979), at Chernobyl NPP (USSR, Ukraine, 1986) and at Fukushima Daiichi NPP (Japan, 2011). Our mission is to stop any more catastrophes from happening and this is something which we must achieve.

For a nuclear-free future

Speaking with Bellona, Mayor Idogawa said he intended to address such letters to the mayors of all cities of the Baltic region.

“Everyone must know the truth about how we are suffering from nuclear power, from the consequences of the catastrophe at Fukushima Daiichi NPP, [and] I will do everything I can to help the fight for a nuclear-free future,” Mayor Idogawa, whose town was just ten kilometers from the Fukushima plant, told Bellona. 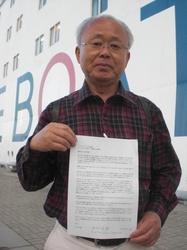 Mayor Idogawa was taking part in the Peace Boat Onboard Conference for a Nuclear Power Free World on board of the Peace Boat, currently on a voyage in the Baltic Sea. The Peace Boat is owned by an eponymous Japanese non-governmental organization which has since 1983 been engaged in peacekeeping efforts and promotion of sustainable development and has arranged similar voyages around the world. The organization holds a Special Consultative Status with the Economic and Social Council of the United Nations and has been nominated for the Nobel Peace Prize.

On May 18, the Peace Boat called into St. Petersburg. During this visit, conference participants talked to the press and Mayor Idogawa’s letter to Sosnovy Bor Mayor Golikov was made available to the media.

Miyako Tsukagoshi, an anti-nuclear activist and Peace Boat volunteer, told journalists about the change in the Japanese’ attitude toward nuclear energy. She said that of the 50 reactors that remained functionally operational at Japanese nuclear power plants, only two were still producing power. The rest had been shut down for safety reasons and because of the local population’s opposition to continued operation of sites presenting radiation hazard. Japan’s nuclear reactors had earlier accounted for about 30% of all power produced in the country. Yet the massive reactor closures have not resulted in power shortages thanks to enhanced energy efficiency measures undertaken at existing thermal power plants and a vigorous development of renewable energy sources. According to Tsukagoshi, Japan as well as other countries must abandon nuclear power since the industry is not just dangerous but also responsible for generation of vast amounts of radioactive waste – a hazard that will not abate for hundreds and thousands, even tens of thousands, of years. 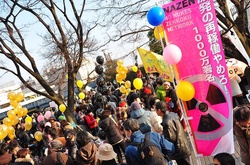 Tsukagoshi said that thousands-strong demonstrations take place regularly in Japan, rallying against the continued use of nuclear energy and for closure of all nuclear power plants. For instance, between twenty and 5,000 people gather every Friday in Tokyo for anti-nuclear actions near the government building. Still, said Tsukagoshi, the country’s political leaders are not prepared to commit to a series of consistent steps needed to phase out nuclear energy completely in Japan – even though the examples of Italy, Germany, and Switzerland show that such a phase-out is quite possible.

“After the catastrophe at Fukushima Daiichi NPP, it was as if the Japanese people opened their eyes and realized that it was the experts and activists who had been right, saying that nuclear energy was dangerous and unneeded, and representatives of the nuclear industry, who had been praising their trade, turned out to be nothing but cheats,” Tsukagoshi said in a conversation with Bellona.

When the Futaba mayor’s letter was presented to the media, Pania Lincoln, a representative of Peace Boat, said that as a non-profit organization, Peace Boat was paying special attention to so-called “people’s diplomacy” – ways by which ordinary citizens can attempt to find rapport in a conflict zone or an area at risk of becoming one. In 1990, the organization’s vessel voyaged to North and South Koreas, and in 1994, to Israel and Palestine. The NGO, according to a description of its activities on its website, is also affiliated with the Japan Campaign to Ban Landmines and the Northeast Asia Secretariat for the Global Partnership for the Prevention of Armed Conflict. The For a Nuclear Power Free World project started in 2010. Together with the Japan Lawyers’ International Solidarity Association, information on the NGO’s website says, Peace Boat has also launched a Global Article 9 Campaign to Abolish War, a project aimed at protecting locally and building international support for Article 9 of the Japanese Constitution, which “renounces war as a means of settling international disputes and prohibits the maintenance of armed forces and other war potential.” Peace Boat serves as the secretariat of this campaign, the organization’s website says.

Peace Boat also takes part in humanitarian relief efforts, working to help victims of armed conflicts and natural and man-made disasters. In 2003, Peace Boat provided humanitarian aid to earthquake victims in Afghanistan, and in 2006, in Pakistan. Following the devastating earthquake and tsunami of March 2011 in Japan – the same dual disaster that triggered the catastrophe at Fukushima Daiichi – the NGO was able to mobilize and coordinate the efforts of thousands of volunteers who distributed food, aided the evacuees, and helped clear roads in Ishinomaki, Miyagi Prefecture.

In a conversation with Bellona, Lincoln said that Peace Boat participated in organizing and conducting two previous Global Conferences for a Nuclear Power Free World, in Yokohama and Tokyo in 2012.

“We consider it an important mission to help victims of the radiation catastrophe in Japan, share our experience and be heard in other countries of the world, in particular, in the Baltic Sea region. Eighteen nuclear reactors are located around the Baltic [Sea], one more unit is in construction stage in Finland, and four reactors are being built in Russia – two at Leningrad NPP-2 and two at Kaliningrad NPP. This is shocking. I hope people here can still draw lessons from the tragedy at Fukushima [Daiichi] and abandon nuclear power,” Lincoln said.

After it left the port of St. Petersburg, the Peace Boat continued its journey, with next stops scheduled in Finland’s Helsinki, Estonia’s Tallinn, and Latvia’s Riga, and meetings with local activists and participation in anti-nuclear actions planned in these Baltic capitals.

Statements given to Bellona for this story, save for Mayor Idogawa’s letter to Sosnovy Bor Mayor Golikov, were rendered into English by Bellona from Russian translations of these quotes as used in the original Russian report.